When an ashen cross is lightly marked on the forehead of a Christian participating in an Ash Wednesday service on February 22, worshippers who are present are reminded that we are earthly creatures made from the dust of the earth.

As children of God, we will remember our baptism into the Christian faith and our journey with our Saviour following conversion. We will remember that we are the body of Christ, living in community with others who wear the smudge of the cross.

Ash Wednesday marks the beginning of the Lenten Season. Throughout the Christian Church, this season is known as a time of repentance and turning from sin and renewal of faithfulness to the Gospel. Ashes and sackcloth were symbolic of repentance, sorrow, and grief in the Old Testament, throughout the intertestamental centuries, and in the New Testament as alluded to by Jesus.

Since the time of my new birth at the Willshire Zion Church of the United Brethren in Christ, I have been observing the spiritual disciplines of the Lenten Season–fasting (the denying of self), alms-giving (self-denial offering for missions), and praying (reflecting on and meditating upon the suffering and death of Jesus Christ). For many including myself, the receiving of the ashes has become a meaningful part of the observance.

As Christian believers, foregoing or receiving the ashes, let us welcome the Lenten Season.

One simple joy of vacations is attending other churches. Pam and I have visited some good ones over the years. Last year, in Texas, we visited Chuck Swindoll’s church, upon discovering that his church stood just a mile from our hotel.

When you pop in for a Sunday service, all you get is a snapshot. There is so much you never see–small group ministries, needy ministries, youth outreach, pastoral care, missions, evangelism and discipleship, etc. In no way can you judge a church (if that’s what you’re inclined to do) on the basis of a one-time, or two-time, visit. Though I’ve heard many people try.

However, I do take close note of how churches treat guests. And whether it’s a large church or small church, we usually get the same treatment: we are ignored. You’ve experienced the same thing, haven’t you? I say this not with some kind of indignation, but with high amusement, because it’s so common. It’s as if church people are afraid of visitors. As people walk by, avoiding eye contact, it tickles me. I want to reach out my hand and say, “Hey, I won’t bite.”
END_OF_DOCUMENT_TOKEN_TO_BE_REPLACED 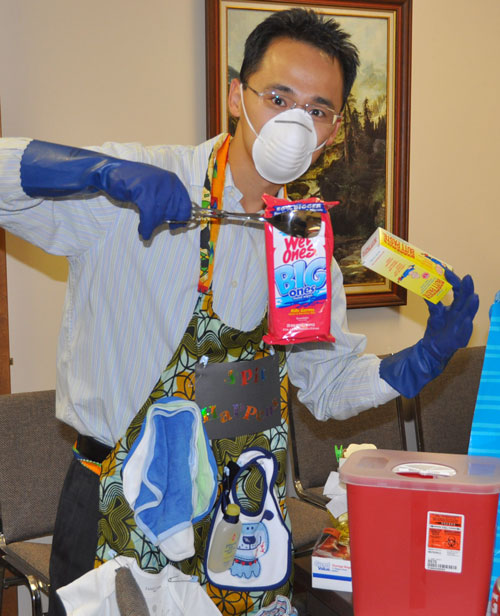 Frank with some of his Daddy Shower gifts.

The Healthy Ministry Resources staff held a “Daddy Shower” for Frank Y, who joined the staff in September as an associate director of Global Ministries.

Frank and Ginny became parents on October 10, when their first child, Levi, was born. The staff gave Frank a variety of gifts which will be helpful when it comes to having a baby in the house–face mask, long rubber gloves resistant to toxic chemicals, tongs, ear plugs, Wet Ones, a very clever apron, strong black tea, and a manual titled, “Do Diapers Give You Leprosy?” Jane Seely, who makes jewelry, added a serious gift for Ginny–a colorful bracelet which included Levi’s name.

Churches frequently contact me for advice on technology needs, particularly in regard to the internet. Just yesterday, a church contacted me about their website. They need a new website, but also want some kind of online contact management system which several people could access (they are currently just keeping records in a Word document). Did I have any advice?

Those are basic needs for churches of any size–a website, and tracking people.

Our churches are using a lot of different things in both areas, from do-it-yourself tools to purchasing full-blown systems.

I told that church I would find out what some other UB churches are doing, especially in contact management, and get back with them. That’s what I’m doing now.

How is your website done? And what do you use to track people? Whether or not you’re happy with what you use, I’d like to know.

I created a form so you can respond.

I’ll compile results and post them on UBCentral.org. I’m sure it’ll be helpful to lots of churches that are asking the same questions this church asked of me.

06 Oct The Mac Cult in the National Office

Today, everyone’s focused on the death of Steve Jobs, co-founder of Apple. He’s a religious figure in that he started the Apple Cult. It started with Mac users, who (like me) could be extremely obnoxious in their evangelistic zeal. It has since spread to include iPod, iPhone, and iPad users. I am all of the above (though the iPad is actually my wife’s).

The Healthy Ministry Resources office has been entirely Macintosh since 1988. Prior to that, I produced the monthly United Brethren magazine on an AT&T PC with two 5.25″ floppy drives (no hard drive). I composed the articles in Wordstar, then sent the disc to a printshop, which printed out the typeset articles in long strips of heavy paper. I then spent up to two weeks doing layout, bent over a light table laboriously pasting everything down, with regular trips to the chiropractor.

When Denny Miller came to the office in 1987 as Associate Director of Church Services, he was already an Apple user. In mid-1988, he dragged me along to a computer store. I believe we went to look at Apple II computers. But instead, we were blown away by the insanely great Mac. I soon had a Mac II on my desk (2MB RAM, 40MB hard drive, monochrome monitor) and a LaserWriter Plus nearby. Within a month, with no training whatsoever, I learned this new computer, along with Pagemaker, and cranked out the October 1988 United Brethren magazine entirely on-screen.

The Mac, truly, changed my life. Or Denny did.

Today, every employee in the office uses a Mac. Gary Gates works here one day a week, and I believe he brings a PC laptop, for which he’s been given a special dispensation. We have a PC in shipping, because UPS requires PC software, and Finance Director Marci Hammel, in addition to her iMac, keeps a PC laptop open for banking purposes. But everyone else uses Macs entirely.

We basically do no training. And since problems are few, I provide support out of my back pocket. So, as a small office, the Mac serves us well. Bishop Whipple came to the office in 2009 as a veteran Mac user. Jeff Bleijerveld came from a PC office, but is now a devoted (but not yet obnoxious) convert. And now we’re working on newcomer Frank Y. It’s just a matter of time.

One more thing: we’ve not had a computer virus since 1991.

“I am one of the members of the board of directors for “Teams For Medical Missions” that provides spiritual and medical services for the poor in St. Mary, Jamaica. We are presently seeking an Executive and  Associate directors to lead from our office in Macungie, Pa., due to the retirement of our present director effective February 2012. Could you please announce this in our UB family for me? For additional information about this ministry interested persons may visit t4mm.org.

We’ve been having email problems at the national office, the result of some mischief from a Nigerian spammer. To counter that, we are migrating all of our email offsite to Google Apps. If you have sent email to someone with an @ub.org extension, your email may have bounced back to you. Hopefully, this will all be resolved over the weekend.

We are receiving most email. A bigger problem has been sending email from the national office, and having it get rejected (thanks, Mr. Nigerian, for getting us blacklisted as a spammer). If you have questions about whether or not an email got through, feel free to contact the appropriate person at Healthy Ministry Resources. Call toll-free 888-622-3019.

10 Feb Got Any Old UB Hymals to Donate?

Do you have some of the old maroon 1973 United Brethren hymnals sitting around somewhere? We occasionally receive requests for that hymnal.

Most recently, The Village of Laurel Run (formerly Piney Mountain Home, once operated by Mid-Atlantic Conference) expressed interest in some. Lois Culler writes, “I go there and play the piano and I have found that some of these hymnals are in real bad shape. A group of us are going up to try to put masking tape on them to hold them together.” If they could get some donated hymnals in good condition, that would be great.

If you have some hymals to donate, contact Steve Dennie.

Mainstreet Church (Walbridge, Ohio) is replacing its phone system, and wonders if another church or organization would like the previous system, which is 3-4 years old. They are switching to an IP Voice system. The phone system they are hoping to sell consists of:

05 Jan Christmas at Your Church: Tell Us About It

United Brethren churches do a lot of special things during the Christmas season. What did your church do special? Other UB churches would be interested in hearing about it.

While the Christmas season is still fresh in your mind, write up a little description about any special events, services, activities, etc. at your church.

Type in your information and send it. You can even attach digital photos. We’ll get it posted on UBCentral.org so others can read about it.