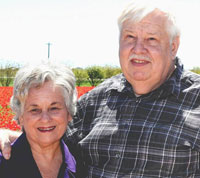 “Roger worked with the two groups that he was scheduled to consult for (the Sonike and Felupe) and was even able to spend five days with a third one (Kriol) checking the book of Ruth. The Sonike/Sarakule people group are Muslim. One of the problems the team ran into during the two weeks of checking is that it coincided with the Muslim festival Ramadan. The three Sonike translators had to fast every day during that period. The work continued on even when at times they felt weak and had a hard time concentrating.”

Marilyn spent time with a team working with a people that that is almost completely Muslim.

Marilyn returned to Honduras in time for the yearly Garifuna conference to which people come from all over Honduras, Guatemala, Belize and from various of the Garifuna churches in the US. This year they dedicated a whole afternoon to celebrating the Garifuna Bible (the Reecks were instrumental in its translation). A Garifuna women’s group sang a song about the Bible and lifted it up high.