Mark Tinsley was appointed senior pastor of Jerusalem Chapel (Churchville, Va.), effective July 26, 2021. He follows Dennis Sites, who retired after serving 37 years as pastor of Jerusalem Chapel. Tinsley is a graduate of Liberty Baptist Theological Seminary. He has served as a chaplain in the US Army Reserves, and most recently pastored a church in Madison Heights, Va. He and his wife, Beth, have five children ranging in age from 6-16.

Pastor Mark Ralph (right) has been appointed Interim Senior Pastor at Findlay First UB church (Findlay, Ohio). He will assists the congregation in preparing for their next senior pastor, who will be appointed within the coming six months.

Rev. Tom Datema (left) has been assigned as senior pastor of Gaines UB church (Caledonia, Mich.). He and his wife, Kim, moved to Caledonia on June 21. Tom had been senior pastor since 1998 of Zanesville UB church (Zanesville, Ind.), and was ordained in 1999.

Dr. Ray Seilhamer (right) has been named senior pastor of Zanesville UB church (Zanesville, Ind.) effective July 1, 2020. He has been a United Brethren minister since 1961, and served as bishop 1993-2001. His most recent pastorate was at Mt. Pleasant UB church in Chambersburg, Pa.

We have some catching up to do regarding the appointment of senior pastor. The following new appointments have occurred since October 2019. 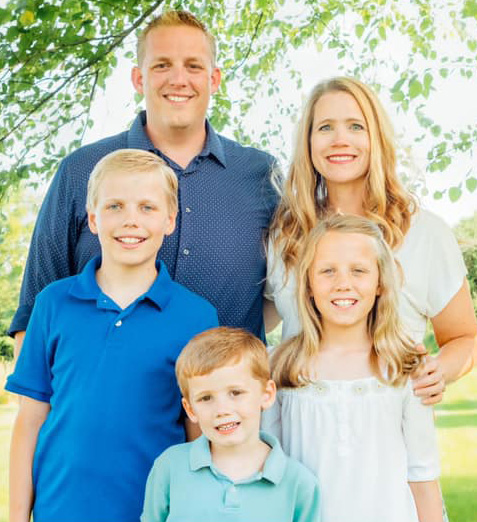 Jason and Melanie Carter and children.

Jason graduated from the University of North Carolina-Greensboro in 1999 with a degree in Philosophy, and in 2010 received a Master of Divinity from Trinity Evangelical Divinity School in Deerfield, Ill. Melanie holds undergradaute and graduate degrees in Vocal Performance.

From 1998-2004, Jason served in youth ministry at two different churches, one in North Carolina and the other in Champaign, Ill. From 2004-2007, he was Worship & Outreach Pastor at Deer Grove Covenant Church in Palatine, Ill. For the past 12 years, 2007-2019, he has been associate pastor of Village Church of Gurnee in Gurnee, Ill.

Stephen Clymer was appointed senior pastor of Victory Chapel (Liberty Center, Ohio) on August 4, 2019. He replaced Don Ross, who retired after serving as senior pastor of Victory Chapel since 2009. Clymer graduated from Moody Bible Institute in 1982 with a degree in Bible/Theology, and received a Master of Arts in Pastoral Ministries in 2002 from the Huntington University Graduate School of Christian Ministries. He has been in pastoral ministry since 1982, including 1991-2000 as pastor of the former Harvest Lane UB church (Toledo, Ohio), and two previous stints at Victory Chapel: 2001-2005 and 2007-2009.

Dr. Jody Fleming was appointed senior pastor of Strinestown UB church (Strinestown, Pa.), effective September 8, 2019. She holds a Master of Divinity from Evangelical Seminary (Myerstown, Pa.), and a Ph.D. in Theological Studies/Global Christianity from Regent University School of Divinity. She takes the place of Rev. Dawn Spangler, who had pastored the church since 2012.

Marc Stephenson was appointed senior pastor of First UB church in New Castle, Pa., effective January 1, 2019. Since 2012 he had been senior pastor of Mt. Olivet UB (Chambersburg, Pa.), and was youth pastor of Cochranton Community UB (Cochranton, Pa.) 2005-2012. Marc was ordained in 2007.

Shippensburg, Pa.
Michael Wentz has been appointed senior pastor of Prince Street UB church (Shippensburg, Pa.) effective July 1, 2018. He had previously pastored United Brethren churches 1995-2008, and was ordained in 1997, after which he was employed as a health care manager.