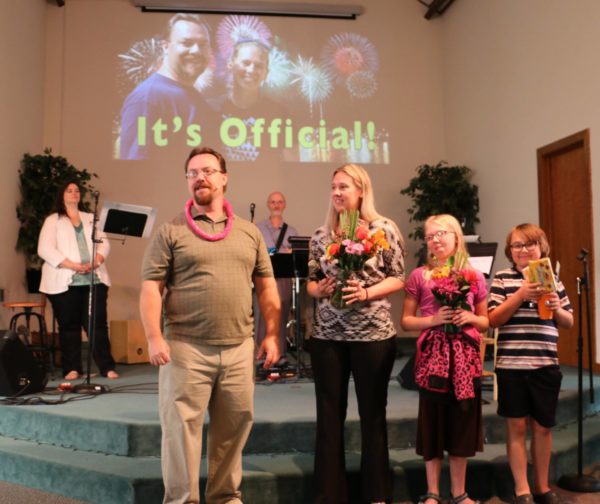 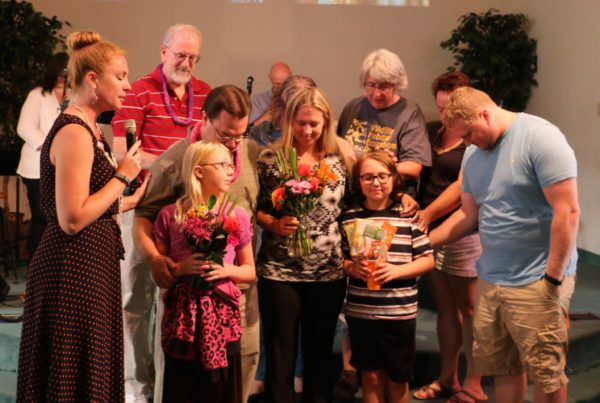 The Anchor Resource Team prays over the Whitacre family.

On Sunday, July 3, 2016, Anchor UB church (Fort Wayne, Ind.) officially announced the appointment of Kevin Whitacre as the new senior pastor. Kevin had served the past two years as associate pastor, and had led the church since April, when founding pastor Tim Hallman took a position with the Fort Wayne YMCA.

Anchor made it a celebrative time. At the beginning of the service, the Whitacre family was brought to the front of the church. As board chair Tomi Cardin read the official appointment from Bishop Todd Fetters, a number of things happened. People stood to clap and cheer. People distributed leis. Balloons streamed from the balcony, to be batted around by the congregation. Flowers were presented to Christia Whitacre, and gifts were presented to both children.

After things calmed down, the Anchor board (called the Anchor Resource Team) came forward to lay hands on the new pastoral family as Tomi Cardin prayed over them. Then the congregation went on with the service (Kevin preached wearing his lei). After the service, cakes awaited in the lobby.

Participants in the baptisms. Pastor Kevin Whitacre is on the right. 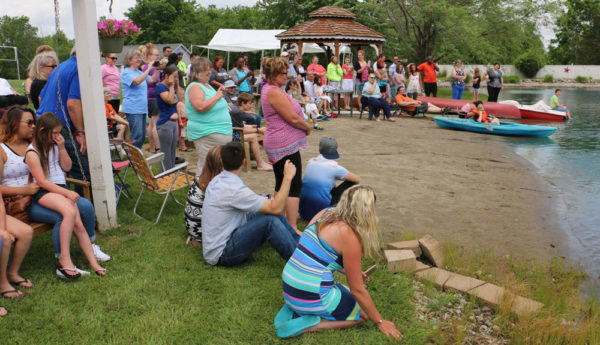 Watching from the shore. 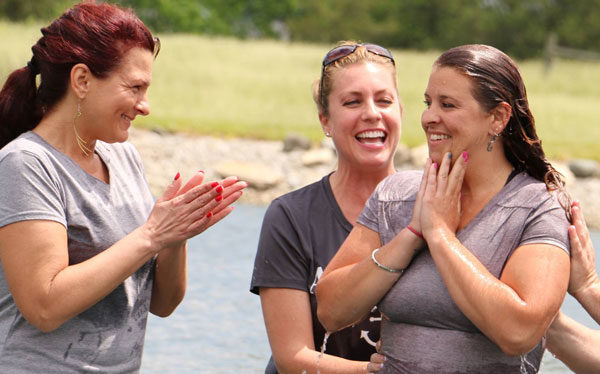 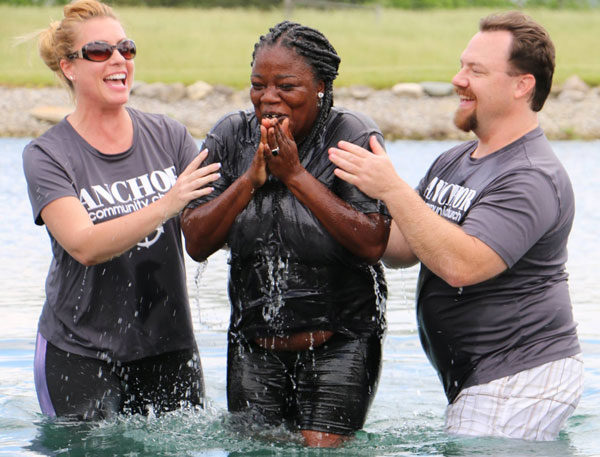 Kevin Whitacre (right) and Tomi Cardin (left) conduct one of the eight baptisms.

Anchor UB church (Fort Wayne, Ind.) held its annual baptismal service and church picnic on Sunday, June 5. After the morning service at the church, the congregation adjourned to the home of parishioners whose property includes a large pond.

Eight persons were baptized. Associate pastor Kevin Whitacre, who is leading the church until a senior pastor is officially assigned (following the departure of former pastor Tim Hallman in April), conducted the baptisms. He was assisted by Tomi Cardin, who chairs the church’s administrative board. She is also executive director of Redemption House, a faith-based alternative to incarceration for women; six of the women baptized were residents of Redemption House.

After the baptisms, everyone stuck around for a potluck, volleyball, swimming and more. Fortunately, the forecasts of rain proved wrong.

Dedication of the new parsonage at Brooklyn Park.

The previous parsonage after the tragic fire.

On April 17, Brooklyn Park UB church (Baltimore, Md.) dedicated its rebuilt parsonage. Pastor Samuel Sinnah and his son, Joseph, planned to move in as soon as the county granted a permit for occupancy. 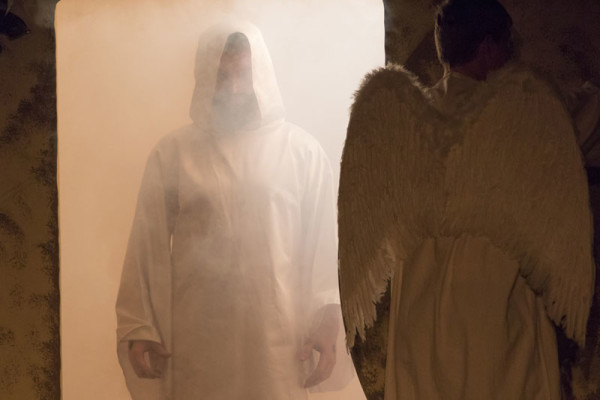 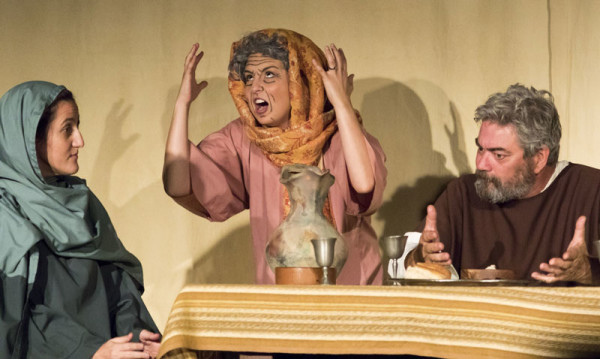 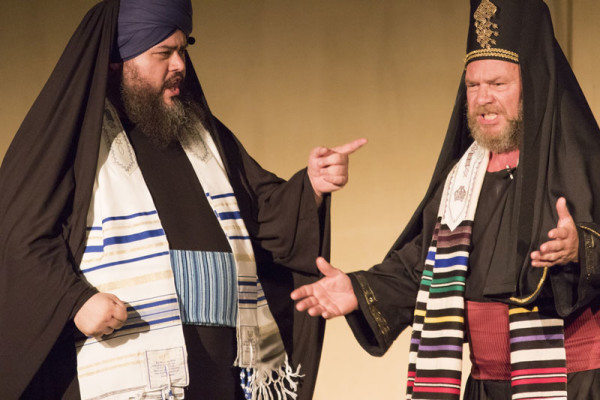 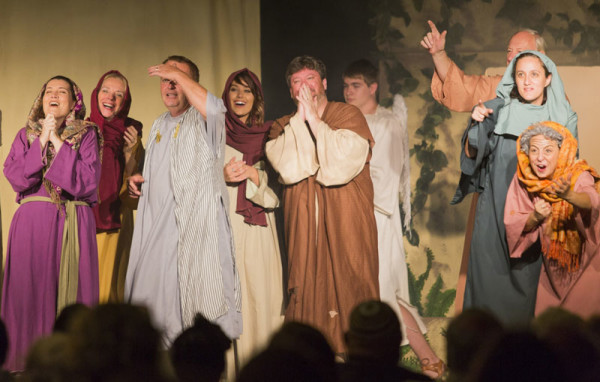 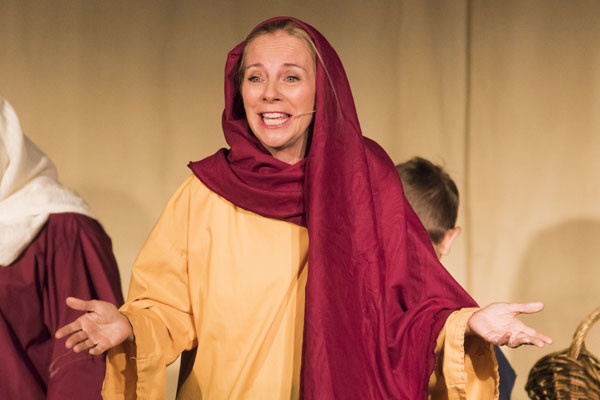 With Deronda Meyer’s original script and Pastor Matt McKeown’s original music, our cast and crew blessed our church and community with five performances of “Grave Dance.” The resurrection story is told from the prospective of transformed Zacchaeus, the families in Jerusalem, the adultress thrown at Jesus’ feet, and the disciples. As the resurrected Savior comes out of the tomb, the audience is thrilled to see him dance in joy and victory over the grave.

On Maundy Thursday, our weekly prayer group met as usual. We were expecting the regular prayer time. When we arrived, the communion set was on the table and Pastor Travis Ambrose told us that since it was Maundy Thursday, we were going to take communion as the disciples did with Jesus on that day.

We had a time of silent prayer and then took communion together, followed by our regular prayer time. After ending our time there, we went into the Sanctuary and prayed over every pew and the entire sanctuary asking for God’s blessings on our Sunday service.

On Sunday morning, we were blessed to have many people there who had not been in our church for years. We are so thankful that one of our ladies and Pastor Travis were on the same page about communion on that special day.

For decades Roseville UB Church has partnered with Grace United Church around the corner (it used to be Evangelical United Brethren) to do an Easter sunrise service and breakfast. Normal attendance was 40-45 with 10-15 from our church. Grace closed last June, so we prayed about what to do on Easter this year.

Gerry Drews, our Men’s Ministry coordinator, suggested we move our scheduled men’s breakfast from March 20 to 9 am on Easter Sunday, and open it up to everyone. We had 112 show up for breakfast (our average attendance is about 90). Joel Plato, one of our young adults, gave a presentation about a mission trip he had participated in with Power to Change.

We then moved upstairs for our Easter worship celebration and focused on Jesus as the Giver of Life. With several more visitors in the crowd, we topped 120. Best of all, we had two adults make a decision to follow Christ! What a great day!

Tell us about the Easter season at your church. 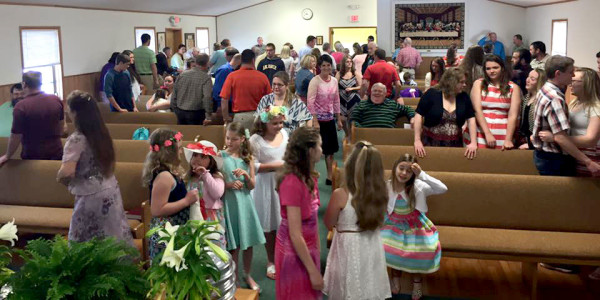 A crowded sanctuary at Mt. Hermon UB on Easter Sunday.

At Mount Hermon, we began our Easter Sunday with a breakfast that was well attended. We then had a packed worship service with many guests and people who have not been frequently attending for some time. We had nearly 40 kids in our children’s ministry, who had an egg hunt following the service.

This year we used the Easter season not so much to be an outreach to those who aren’t saved, but to reach out to those who have “given up” on church. We really hit home how the resurrection is still relevant for us as Christ followers today.

Tell us about the Easter season at your church.

On the Thursday evening before Easter, Mt. Zion hosted a Maundy Thursday service, with open communion from 6:30 – 8:00 pm. Many came and spent time either at the altar or in their seat to celebrate The Last Supper.

Our Good Friday service, at 7pm, was a wonderful time remembering what the cross meant to each of us personally.

We held our Easter morning Sunrise Service at 7 am. Songs of the faith and Scripture reminded us that Jesus is Alive! Breakfast followed our Sunrise Service. So many came that we had to set up more tables. That was a good problem.

Our 9:30 Easter service was packed with people, and filled with music and God’s Word.

Strinestown UB Church celebrated Resurrection Sunday several ways. Our Sonrise Service included a drama by some of the women. The men cooked a pancake breakfast with all the trimmings. Our morning service used Luke 24:1-12 to focus again on the use of women to go and tell.

The climax came as we received six new members by profession of faith who have already been actively serving in the church. The children enjoyed an Easter egg Hunt following the morning service. The Holy Spirit has been anointing our services in a special way for the past few months. God is Good!

28 Mar Easter at Our Church: First UB in Columbus, Ohio

We experienced the most participants in an Easter Egg search in the last 20 years. Scripture verses were placed in the eggs along with candy. We also handed out bags to pick the eggs that contained information of church services and up-coming events. The Sunday morning service was well attended with several new attendants.