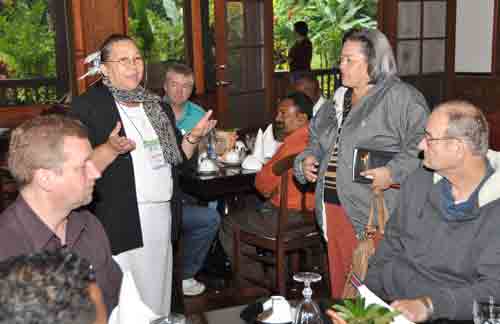 Juanita Chavez (standing, left), superintendent of Honduras Conference, speaks to everyone before the breakfast meal. 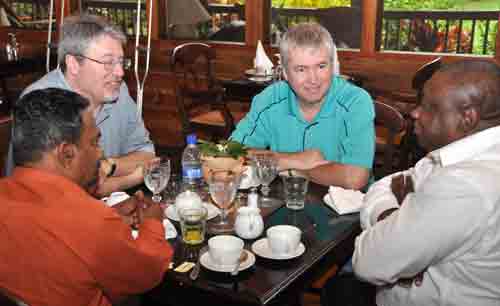 On Sunday morning, the General Conference delegates and guests ate breakfast at a beautiful retreat center in the hills surrounded by lush tropical vegetation. Just stunning. A buffet breakfast–fruit, pancakes, eggs, sausage, ham–was prepared for us.

After eating, we moved to another building for a service. All of the attending delegates and guests were introduced. The delegates from Mexico hadn’t yet arrived, and Ajiax Wo, from Hong Kong, was still stuck in New York City. But most everyone else was there.

Then we heard a message from a Central American who had been giving the keynote addresses during the Honduras National Conference. Although he spoke good English, endorsed missionary Roger Reeck translated for him. It was a superb message, taken from Colossians 4.

10 Jan The Journey to General Conference 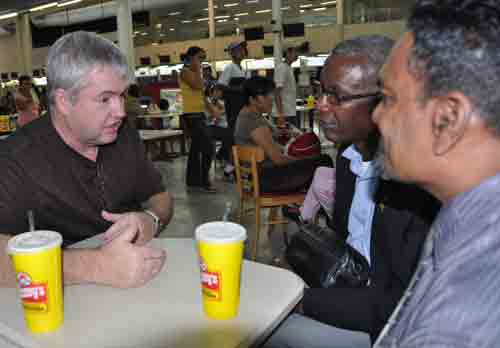 Our party of 9–4 Americans, 2 Jamaicans, 3 Sierra Leoneans–arrived in San Pedro Sula, Honduras, around 2:30 Saturday afternoon. We all got through immigration just fine…except for Theresa Musa. She was the last person in line on our flight, and they held her for a long, long time. There were questions about the visa, which she had gone to heroic efforts to acquire, with a quick trip Friday to New York City to meet in person with a Honduran consulate official.

It seemed like every employee in the airport got involved in discussing the validity of the visa granted the day before in New York City. They were cordial. It’s just that nobody seemed to want to accept responsibility for approving her entry. So they got lots of people into it, spreading the potential blame around. And ultimately, they let her pass 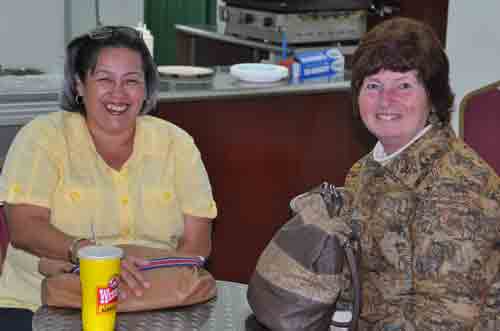 Maira Raudales, along with her son and daughter and a driver, were waiting for us when we finally emerged into the terminal. Oliam Richard, our superintendent in Haiti, was also there. Maira and Company had brought an air-conditioned passenger bus, very nice. We loaded our bags in the back. 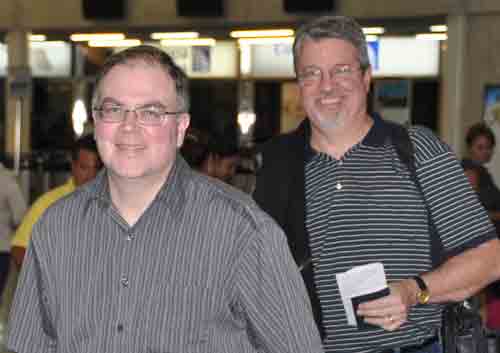 Then it was just a matter of waiting for the two Canadians, Brian Magnus and Paul Plato. They got delayed in Miami, but showed up near 5 pm. Donna Hollopeter bought everyone the Number 1 Single meal at the airport Wendy’s while we waited.

The trip east to La Ceiba took three hours, with a bathroom stop at a quick-stop mart. It rained much of the way.

We arrived in La Ceiba around 9 pm, and went straight to the Grand Paris Hotel. Jeff Bleijerveld, Director of Global Ministries, showed up just a few minutes after we did, and helped us get checked in. Along with our room key-cards, we were also handed a remote to the TV. That’s different. 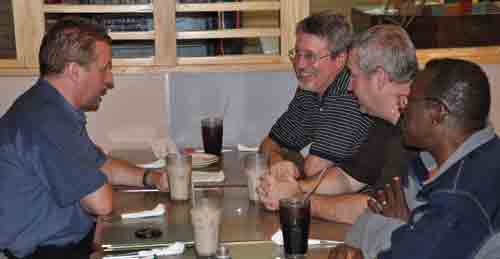 After depositing our bags in our rooms, we walked (in the rain) next door to the Pizza Hut for a late supper. (En route to the hotel, we passed Burger King, KFC, Dunkin’ Donuts, Quiznos, Applebees, and another Pizza Hut.)

Jeff Dice was there, eating and watching the Cowboys-Eagles football game. He had come up from Costa Rica, where he and his wife are in Spanish language school.

Before leaving Pizza Hut, Jeff Bleijerveld bought everyone a bottle of water, which we’ll need to brush our teeth in the morning. He also warned, “La Ceiba is a nice-looking town, but don’t go out for a walk by yourself, day or night.”

Karis Vong, from Macau, had arrived earlier in the day. She used a Portuguese visa (Macau was a Portuguese colony until 1999), which posed no travel problems. But the other Hong Kong delegate, Ajiax Wo, was stopped in New York City. He’ll need to meet with the Honduran consulate (the same office Theresa Musa went to) first thing Monday morning, get a visa, and then head to Honduras. So he’ll miss some (if not all) of General Conference. Ajiax was scheduled to preach Monday night, but Billy Simbo, scheduled for Tuesday, offered to switch nights with Ajiax.

09 Jan Problems with Visa for Ajiax Wo

Nine of us are now sitting at gate D51 in Miami, waiting to board our flight to San Pedro Sula, Honduras. Seven of us left Fort Wayne, Ind., at 6:30 this morning–Phil Whipple, Donna Hollopeter, Jason Hollopeter, Theresa Musa, Billy Simbo, Alan Simbo, and me.

In Miami, the two Jamaican delegates were waiting for us–Winston Smith and Isaac Nugent.

But we received word that Ajiax Wo, superintendent of Hong Kong Conference, is stuck in New York needing a visa to Honduras. Since this is the weekend, he’ll need to wait until the Honduran consultate reopens on Monday, which means he’ll miss the open service and first day of General Conference (assuming he’s able to obtain a visa).

So that’s something to pray about.

Very disappointing news today: the US Consulate in Manila, Philippines, denied a transit visa for Aaron Lim, son of Superintendent Prudencio Lim. He had his visa for Honduras, and just needed a visa to pass through an American airport on his way to Honduras.

Global Ministries made heroic attempts to procure this visa. They met all of the requirements, jumping through every hoop, plus all the hoops that kept being added. Yesterday, a letter from a US Congressman was sitting on the desk of the consulate officer in Manila when Aaron came for his interview. The officer’s reason for denying the visa: the letter didn’t include the cost of the hotel in Honduras. Huh?

Meanwhile, the Honduran consulate in New York City said Theresa Musa’s information was in order. The officer said he would grant the visa…if Theresa was sitting there in his office. He needed to see her personally. Unfortunately, Theresa was in Huntington, Ind., in Donna’s office.

So Thursday night, Theresa flew to New York City and stayed with friends there. This morning, she will meet with the Honduran consulate officer who promised that if he could see her in person, he would grant the visa. Then she’ll fly back to Indiana in the evening. The flight to Honduras begins at 6:30 Saturday morning.

Let’s hope and pray that Theresa returns to Indiana with a visa in hand.

UPDATE (10:55 am, Friday): Theresa got her stamped visa! Praise the Lord for that! 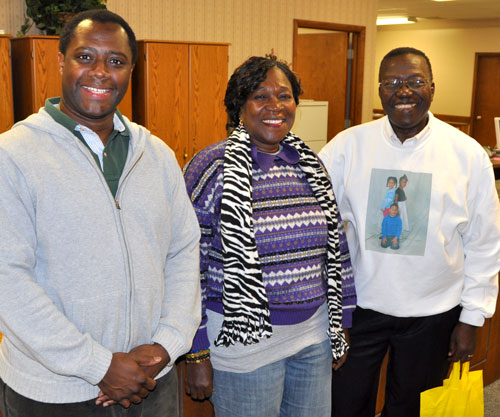 L-r: Alan Simbo, Theresa Musa, and Billy Simbo. They arrived in Huntington today to begin the journey to Honduras for General Conference. On Saturday morning, they’ll travel with the United States contingent. Billy is Bishop of Sierra Leone Conference, Theresa is the other delegate, and Alan, Billy’s son, is tagging along as an observer.

Donna Hollopeter is working on getting a visa to Honduras for Theresa. Likewise for Prudencio Lim and son Aaron, from the Philippines. Phone calls are being made to Congressmen and government agencies. A little prayer couldn’t hurt.

The conference will conclude on Sunday morning at the Bethel UB church in La Ceiba. Then, a service on Sunday night will kick-off the international General Conference.

Each national conferences can send two voting delegates–the highest leader in the conference, plus one other person. Here is our list, albeit incomplete, of delegates.

Brian Magnus, as chairman of the International Executive Committee, will preside over the General Conference meetings.