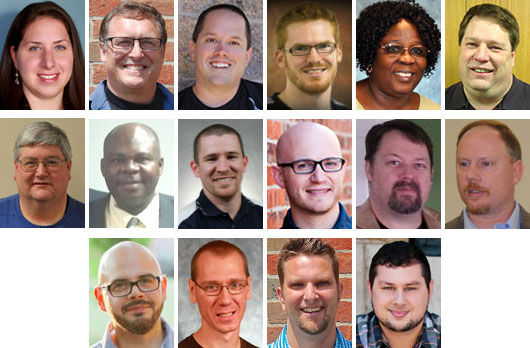 The Pastoral Ministry Leadership Team has granted ministerial licenses to the following persons. We welcome them to the United Brethren ministerial family.

Steve Smith, senior pastor of Lake View UB church (Camden, Mich.) is undergoing heart surgery on Tuesday, Aug 26, at the University of Michigan Cardio Vascular Center. He has congestive heart failure. He says he will undergo a new form of cardio ablation which has not yet been approved for practice in the United States, though it has been used with good success in Europe and Canada.

The first procedure will occur Tuesday morning, Aug 26, at 9:00. It will check for clotting and blockage around the heart. He will then be prepared for the 1 pm surgery, which will take 5-6 hours.

Steve says he is counting on being released Wednesday afternoon, but it may be Thursday. 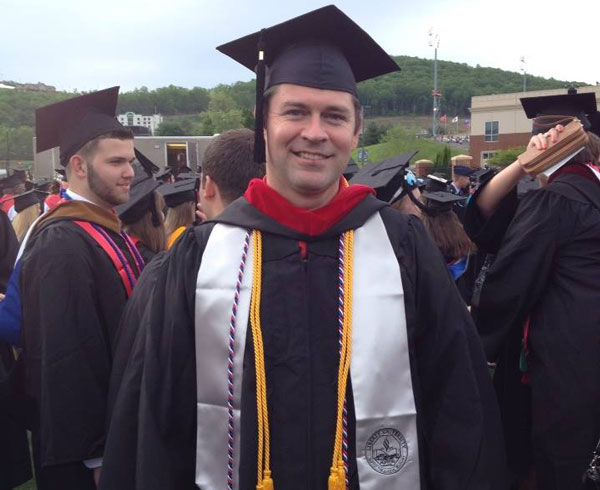 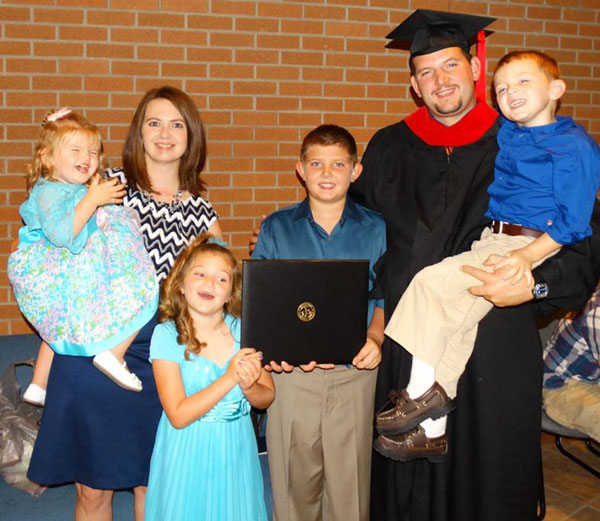 Ricky and Jami Hull and children on graduation day at Winebrenner Seminary.

Congratulations to Mark Young, music and worship pastor since 2004 at Mount Pleasant Church (Chambersburg, Pa.). On August 8, he received his Master of Arts in Religion: Worship Studies from Liberty University. He went through the graduation ceremony in May, but still had a couple classes to complete. Now he’s done, and the diploma came in the mail.

Rev. Robert (Bobby) Blaine passed away early in the morning of July 5, 2014. He was 94 years old. His wife of 66 years, Virginia, passed away in 2010. He is survived by his two children, James and Jacalyn, along with four grandchildren and four great-grandchildren.

Bobby Blaine graduated from Huntington College, where he engineered the most legendary prank in school history: taking a cow to the top of the Administration Building (now called Becker Hall). Beginning in 1948, he pastored churches in Ohio, Indiana, West Virginia, and Kansas. His longest tenure, 1964-1987, was as pastor of Good Shepherd UB church in Greenfield, Ohio. He retired from that church, and continued living in Greenfield until his death.

The funeral will be held at 1 pm on Wednesday, July 9, at Anchor Baptist Church, 456 Jamison Road, Washington Court House, Ohio. Visitation will be held for two hours prior to the service, beginning 11 am.

Jay Burkholder, 77, passed away June 17, 2014, at his home in Chambersburg, Pa. He was a member of Crider’s UB church in Chambersburg. Here is the online obituary.

Jay is the father of Craig Burkholder, a cluster leader and pastor since 1989 of the UB church in Hudson, Ind. Notes of condolence can be sent to Craig at:

Stan, as everyone knew him, was a longtime member of College Park UB church in Huntington, Ind. Beginning in September 1959, Dr. Peters served 22 years in the United Brethren national office overseeing our various publications. He concluded his service there in December 1981.

Stan is survived by his wife, Lola Lee. Just three days before his death, they celebrated 69 years of marriage. Also surviving are two daughters and a son, and many grandchildren and great-grandchildren.

Stan Peters grew up as a UB preacher’s kid. His father, J. Clair Peters, was managing a furniture plant in Hagerstown, Md., but resigned that position in 1926 to prepare for the ministry. He bundled up the family—wife and three children, Stan being the oldest—and moved to Indiana that year to attend Huntington College. Eighteen years later, Stan himself headed off to Huntington College, graduating in 1944 with majors in math and science. He then taught junior high and high school for two years.

In June 1945, Stan married Lola Lee Stites, whom he had met at college. Later that summer, Stan received his quarterly conference license to preach from the North Avenue UB church in Baltimore, Md. He received a Master of Divinity degree from Huntington College’s seminary in 1949, and was ordained in 1950 by Bishop A.M. Johnson. In 1974, Huntington College awarded him an honorary Doctor of Divinity degree.

In 1948, while still a seminary student, Stan began three years as pastor of Third Street UB church in Fort Wayne, Ind. (now it’s called Anchor Community Church). The congregation, which had been meeting in a basement, erected its present sanctuary during that time. Next, he served the St. Paul-Winchester circuit of Monroe, Ind., 1951-53, and then spent a year on the Berne circuit of Monroe and Geneva.

In 1954, Stan and Lola Lee began an exciting five years starting a new church in Kettering, Ohio. A developer sold the conference a corner lot–just a corn field back then. Construction began on the parsonage and chapel. Stan, Lola Lee, and young daughter Renee lived with members of the Prescott Avenue UB church in Dayton for four months, using the upstairs and the basement, with their hosts in between. When the new pastor’s quarters were ready, the Peters’s furniture, which was in storage at the conference camp, was hauled to Kettering in a farm wagon.

Stan visited hundreds of homes in the area, forming a prospect list of over 200 names on whom he concentrated. The congregation grew steadily. In 1959, a Christian education unit was completed under Stan’s leadership.

After 10 years in the pastorate, Stan Peters accepted the editorship of the United Brethren publishing house in 1959. He followed Dr. George Weaver, who had decided to return to the pastorate (and would become bishop 10 years later).

Over the years, Stan had accumulated a variety of experience in many aspects of the printing business. While in high school, he worked for a local newspaper, gaining experience in nearly every aspect of the operation. He ran his own small printshop during his senior year of high school, using a small letterpress in the upper story of a bank back of their property to crank out letterhead, envelopes, calling cards, and other printing jobs. As a college student, he worked in the college printshop and later in the denominational printshop. He even worked as a pressman in Berne, Ind., while in the pastorate. So he had been around the business.

As editor, Peters wrote, edited, and designed the various publications, including the United Brethren magazine and the Sunday school materials for adults and youth. He also worked on special publications, such as the UB Discipline and the UB hymnal. He traveled throughout the US and Ontario promoting the magazine and Sunday school literature, and helped oversee construction of the new UB headquarters building in 1976.

Stan served the church with dedication and humility. He oversaw publication of 491 issues of the United Brethren magazine. He wrote the following as part of his final editorial in the December 1981 edition of the magazine.

“When God directed our path from the pastorate (the ministry of the spoken word) to editor (the ministry of the written word), I could not have surmised that God would have us serve in this capacity for nearly a quarter of a century…..Through the years I have been happy to serve the church in this capacity and sought to make the magazine an inspiring, informative, helpful, and unifying force in the denomination….”

Dave Stephens (right), an ordained UB minister who recently retired as director of Camp Cotubic (Bellefontaine, Ohio), posted an update on Facebook on June 11 about his ongoing struggle with cancer.

“Last week I had another CT scan to see how things were developing. Today the doctor told us that the area in the pancreas was smaller than before. He was encouraged with the entire scan. We are too. I’ve shared that I am pain and symptom free. I’m able to work at the camp every day. With the exception of chemotherapy days, I feel almost normal. I am so thankful for all your prayers and support.”

Retired minister Frank Strine was hospitalized yesterday, June 11. They will determine if he needs a pacemaker. Frank is the father of Devon Strine, pastor of Mount Pleasant UB church in Angola, Ind.

Dr. C. Stanley Peters, 91, passed away Monday morning, June 9, 2014, at Lutheran Hospital in Fort Wayne, Ind. Stan, as everyone knew him, was a longtime member of College Park UB church in Huntington.

Beginning in September 1959, Dr. Peters served 22 years in the United Brethren national office overseeing our various publications–the United Brethren magazine, the UB Sunday school curriculum, and other materials. He concluded his service there in December 1981.