On May 12, Huntington University will graduate its first three online students through its adult-degree programs. The graduates (two from Indiana and one from Illinois) will receive degrees in non-for-profit leadership, business administration, and organizational management.

Huntington University will launch a graduate program in occupational therapy in the fall of 2014. The university is currently searching for a director to create the master’s and doctoral level degree programs. This will be the university’s first doctorate degree.

The graduate programs will be located within the new Life Science Education and Research Consortium of Northeast Indiana, which will open on the Parkview Randallia campus in Fort Wayne, Ind.

“Occupational therapy is an in-demand field which is expected to continue to grow given recent medical developments with stroke survivors as well as people recovering from joint and hip replacements,” said Dr. Norris Friesen (right), senior vice president for academic affairs and dean of the faculty. “Given the interest in exercise science, our mission and the fact that there are no other similar programs in our area, this is a very unique opportunity for us to influence the next generate of occupational therapists with an accredited program that seeks to integrate God’s message of grace and love by helping people regain their strength and abilities to live full and fruitful lives.”

The Huntingtonian was judged among hundreds of other schools across the country. First place with special merit is given to those schools with “special and outstanding design and content,” according to the ASPA.

“You have an excellent student newspaper, which shows the creativity and journalistic knowledge of your editors, reporters, writers, photographers, layout/graphics designers and advisor,” said one of the ASPA judges.

Four years ago, Huntington University created a program to promote a more racially and ethnically diverse campus. This spring, the university will graduate its first students from that program.

Launched in the fall of 2008, the Horizon Leadership Program is a partnership between Huntington University and Youth for Christ USA. A cohort of students from racially and ethnically diverse backgrounds is selected each year to receive the Horizon Leadership Scholarship. A combination of federal, state and institutional aid, the scholarship covers all fees associated with tuition and housing costs for up to 10 semesters.

On May 12, Logan Placencia of Auburn, Ind., Evianna Monroe of the Bronx, N.Y., Christopher Burton of Rock Island, Ill., and Shar’Niese Miller of Fort Wayne, Ind., will be the first Horizon graduates. Since their arrival on campus four years ago, more than 20 students have followed in their footsteps, including six students selected for the 2012-13 school year.

“When I consider the paths that the members of this graduating class have traveled in order to arrive at this moment, I can’t help but to be amazed, inspired and encouraged,” said the Rev. Arthur Wilson (right), who led the Horizon program over the past four years.

The program has had an “immensely positive” impact on the campus culture, according to Dr. Ron Coffey, vice president for student life.

“This program has introduced the typical student body to people who might not look like them or talk like them, but through living and studying with each other, students started to see that they had more in common than not,” said Horizon recipient and 2012 graduate Christopher Burton. “The Horizon program has helped HU begin to reflect the real world. You now see light faces, dark faces, faces of color all around campus. And that’s a true reflection of how the world is.”

Over the past four years, the Horizon program has welcomed more ethnically diverse students to HU and has helped the university move closer to its goal: To create a more diverse campus, even outside of the program.

“By almost any metric, the program has been a success,” said Jeff Berggren (right), senior vice president for enrollment management and marketing. “Just consider that in the first year of the Horizon program in 2008 we enrolled more new minority students than we had enrolled in our entire student body the previous year of 2007,”

A one-day United Brethren History Course will be held May 8 in Fort Wayne, Ind. The course is a requirement for ministerial licensing in the United Brethren church. However, people who just want to learn more about United Brethren history are free to take it.

For more information and to register….

After leading the student body for a year in the interim, Rev. Arthur Wilson (right) has been named the new campus pastor of Huntington University.

“Arthur has done a wonderful job as the interim campus pastor, and I’m glad we can make this appointment permanent,” said Dr. Ron Coffey, vice president for student life.

In addition to his role at HU, Wilson serves as the assistant pastor at New Covenant Worship Center in Fort Wayne, Ind.

Right now, you can listen to an interview with Josh Kesler (right) about the January 2012 baseball trip to Nicaragua. Josh, senior pastor of The Well in Huntington, Ind., served as team pastor for the trip.

In January of 2012 a team of baseball players traveled to Masaya, Nicaragua to participate in training events, exhibition games, and a number of relational activities with local athletes and dignitaries. Local United Brethren churches, pastors, and members were able to develop friendships among an entirely new circle within their community and lasting relationships were formed with the visiting short-term volunteers.

The story was written up on UBCentral, with lots of photos. That information primarily came from Jeff Dice, who led the trip. But now you can hear–actually hear–the story of the trip from Josh Kesler. 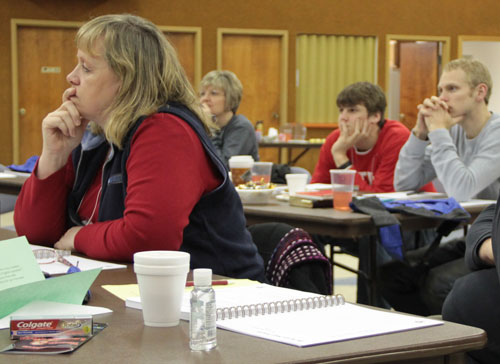 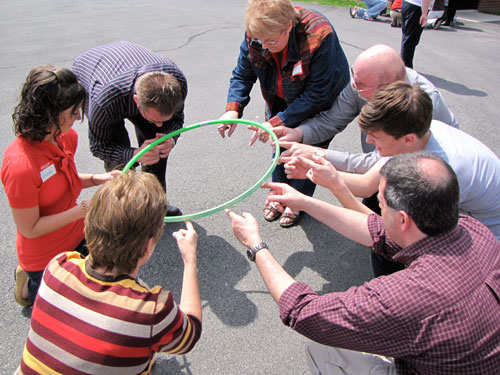 Global Ministries will hold its next edition of this popular seminar June 8-9 in Chambersburg, Pa. This seminar is for persons interested in leading or participating in a short-term mission team. It’s a highly informative, interactive, and inspirational seminar.

Ministers can earn 1 CEU for attending and can attend free of charge if they bring at least one other person from their church.

On Easter, West Windsor UB church held a SONrise service at the little Dimondale Cemetery, and then everyone returned to the church for breakfast.

Sunday school was a bit different. Mr. Hastings, who raises homing pigeons, brought about 20 of the birds. After showing one pigeon up close to the kids (18 of them under age 11), he let all of the birds out of the cage in the bad of his truck. They flew out, circled, and went to his home about two miles away.

Then came an Easter Egg hunt for all of the kids.

We normally have 45-70 people attending on Sunday mornings, but on Easter we had 92!

At Corunna, we enjoyed a delicious Seder meal on Good Friday, remembering God’s work through the ages. Our members did a great job inviting newcomers, resulting in the largest attendance we have seen in many years. Much more importantly, eight people prayed to receive Christ as their savior!