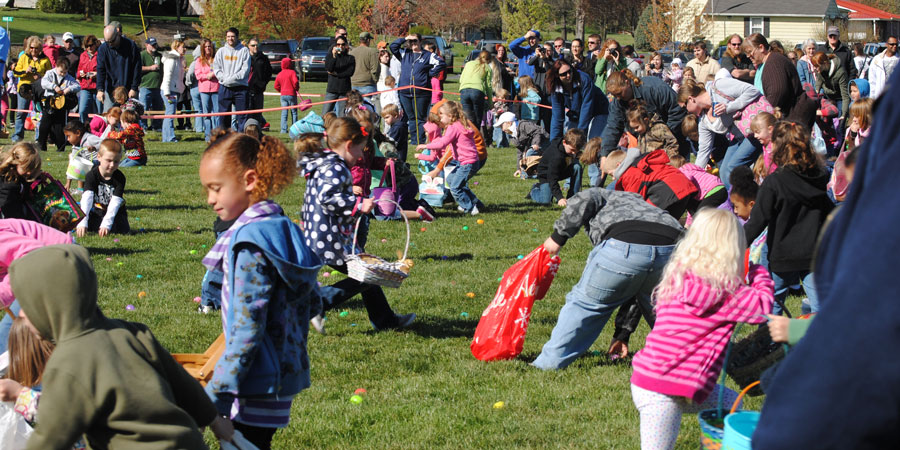 Easter weekend at Mongul Church was one of our best. On Saturday, we held our third annual Easter Eggs-travaganza at a local park. It was our largest ever! More than 600 registered, with over 700 in attendance. Six thousand eggs were given away, as well as 4 bicycles and many other prizes. In addition, our volunteers helped with crafts, food, and games. Several people in our community asked for more information on Mongul Church. We are grateful for God’s favor in our community.

Easter Sunday was truly blessed by God. We had 290 attending, including 11 first-time guests. One of our home groups organized and served breakfast for at least 150. Seven individuals indicated a decision for Christ.

God is truly giving us opportunity to impact the lives of men, women and children in the Shippensburg area. We are committed to God’s mission for us!

On our off years (when we don’t do a large musical Passion Play), we at Mt. Pleasant have done a few other things instead–simple cantatas, special Maundy Thursday services, solemn and dark Good Friday services, etc. This year we tried something new which really blessed me and many others I know: “Experiencing the Last Supper.”

All outward appearances pointed towards a simple drama involving Jesus and his disciples at their final Passover meal together. We watched them sit down for the meal and when Jesus announced he would be betrayed, Da Vinci’s “Last Supper” painting appeared before our eyes, each character frozen into his position as in the painting. This became a springboard for twelve monologues, as each disciple stood and told us about how he met Jesus and had been changed; and each considering the coming betrayal and questioning, “Lord, is it I?”

But where “Experiencing the Last Supper” stood out for me, and others, is that we were a part of it. Each of us had in the pew one of those communion-cup-and-wafer combos. As the man who played Jesus stood and broke the bread and gave it to the disciples, saying, “Take and eat,” we also took and ate. The bread. Then the “wine.” What we do in remembrance took on a new dimension. It was very beautiful.

Now, I was not a part of the drama and I am not on staff, so I do not know stats nor do I have access to pictures. But I know the sanctuary was packed out (I think I heard just over 300 there) and I know there were some visitors among us. In fact, I got word that a family who had been looking around for a home church texted a friend of theirs from our church (the one who played Judas, interestingly enough) to say how much they enjoyed the evening, felt welcomed, and now they intend to make Mt. Pleasant their home.

We are offering a course which will cover a broad range of mission-related issues–history, trends, key concepts, strategy–and cover the history of United Brethren missions.

This course satisfies a requirement for ordination in the United Brethren denomination. However, people wanting a well-rounded view of missions are welcome to attend for just $50. This is the first time the course has been offered.

Jeff Bleijerveld (right), Director of Global Ministries, is the teacher. Here’s what Jeff says about the course:

“Although only an introduction to missions, we will cover a broad spectrum of missions related issues that have both global and local impact. We’ll discuss both effective and detrimental mission strategies, and consider various trends in missions–historical and current trends, and trends specific to United Brethren missions. We’ll wrap up with practical help in implementing missions in the local church, including the opportunity for you to outline a basic missions policy for you or your local church based on the principles you will have learned.”

The cost is $100 if you are seeking ordination, $50 for everyone else.

09 Apr Tell Us About Easter at Your Church 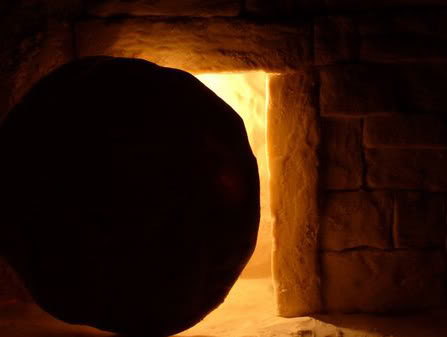 The Easter season–-Lent, Palm Sunday, Good Friday, Easter Sunday-–is always exciting for churches. There are special events, and often large attendances. Churches do some pretty creative things to capitalize on the Easter season.

Tell us what happened during the Easter season at your church. You can use this form. Then we can share it with other UBs right here on UBCentral.

If you have digital photos, send them along using the mechanism on the form, or email them directly to news@ub.org

Global Ministries is partnering with national church planting efforts in Turkey. We invite our children’s ministries, whether a vacation Bible school, midweek or Sunday school, to participate in raising $10,000 to support a Turkish Children’s Bible Camp project. Turkey is the first Islamic country in which the United Brethren church has launched outreach efforts.

The video above tells about our new work in Turkey and the Children’s Project. The video will also be included in the next Mission Moments DVD, which will be mailed to each church in the coming weeks.

Fifth Street UB (Staunton, Virginia). Harry Moore (right), who has served as a supply pastor since before 1997, is retiring effective April 29, 2012. George Etling has been appointed the senior pastor, effective upon Harry’s retirement. George has held a local license with the Jerusalem Chapel Church, under the supervision of senior pastor Dennis Sites, for several years.

Homefront UB (Grandville, Mich.). Josh Good (right) has been appointed senior pastor effective May 1, 2012. He holds a National Conference license and has been the youth pastor at the nearby Banner Church (Byron Center, Mich.) since 2003.

Keller, who will graduate in May 2012 with a degree in math education, has received the Auxiliary Scholarship for the past two years. Presently, he is completing his student teaching at Manchester Junior-Senior High School.

Chosen to be a teaching assistant for Johns Hopkins University Center for Talented Youth in Lafayette College in Easton, Pa., last summer and again this summer, Keller will be teaching two college level math courses to talented high school students from across the United States.

Keller coordinated a trip to Jamaica, and participated in missions trips to India and New Orleans through the university. He also volunteered with Youth for Christ and Open Door Ministry, and worked as a summer counselor at Camp Lutherhaven.

Jayne was preceded in death by her husband, Loren John Mote, Sr.

Interment will be in Clarksville Cemetery, Clarksville, Mich. There will be no viewing or funeral service.

Memorial contributions may be made to the building fund of the Colwood church, 1840 N. Colwood Road, Caro, MI 48723. 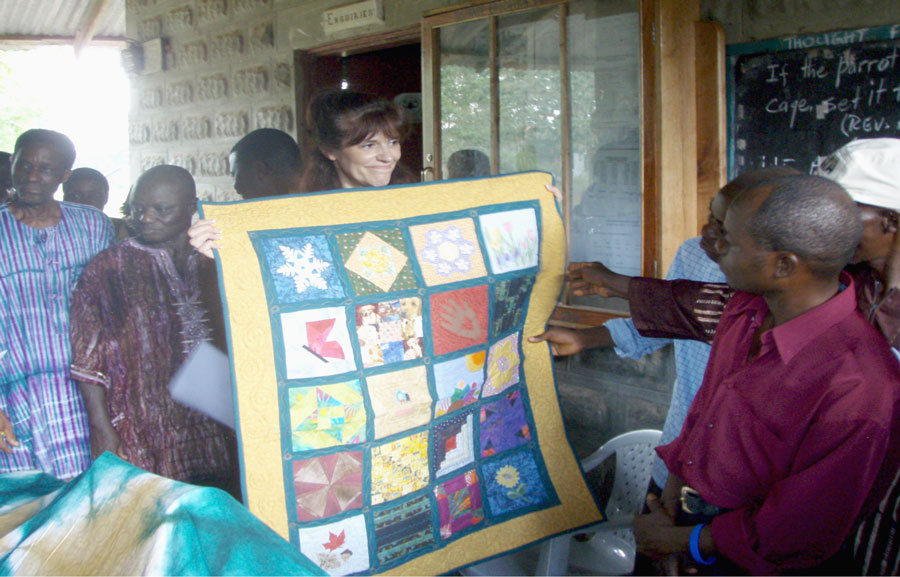 A quilt from Keystone Quilters presented to Centennial School (click to enlarge). 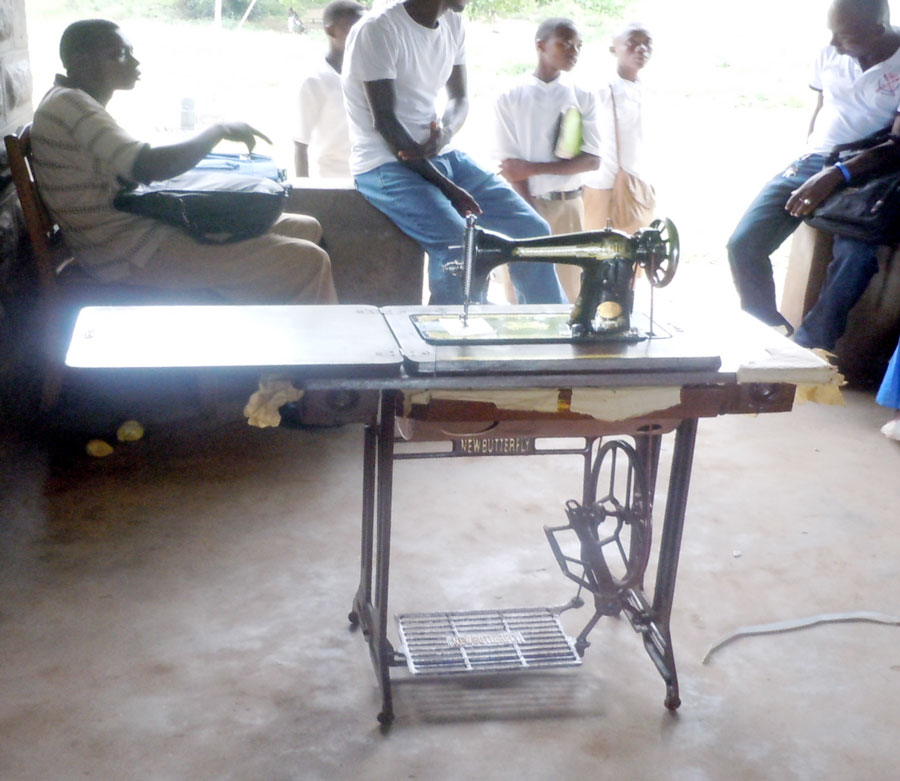 One of the five sewing machines donated to Centennial. 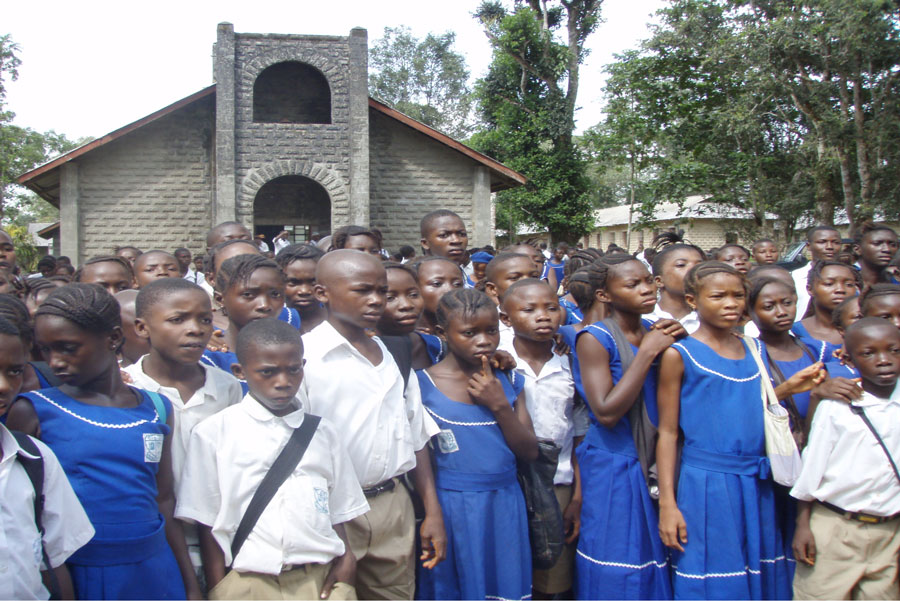 The infrastructural rebuilding of Centennial Secondary School in Sierra Leone is well underway by the tri-partnership of Engineers Without Borders (EWB), the Centennial School Community, and the alumni association of the school (Centennial Old Students Association, or CeOSA). There are fringe benefits that are directly and indirectly in collaboration with the project implementation. This the story of one fringe benefit.

During the second trip of Engineers to Centennial Secondary School in order to refurbish the toilet/bath houses, the team members were appalled at the devastating lack of teaching materials/tools in all of the areas of the school, especially in the laboratories–the chemistry lab, physics lab, home economics lab, etc.

Jamee Pemberton, one of the EWB team members, returned home and shared the plight of the school with her women’s guild called Keystone Quilters. This group not only raised money for some sewing machines, but also collected needles, thread, and other kinds of sewing materials. Also, at the 2011 CeOSA convention, a group of the alumni association donated funds to buy five sewing machines for the school. God bless their hearts! Following are some pictures when the machines and sewing materials were presented.

The five sewing machines have been delivered to Centennial, along with a beautiful quilt from Keystone Quilters and boxes of various sewing materials.

Huntington University’s 114th commencement exercises are coming up. Degrees will be awarded to 264 graduates.

1. An honorary Doctor of Humane Letters degree will be presented to commencement speaker Dan Wolgemuth.

2. An honorary Doctor of Divinity degree will be presented to the Rev. Luther Whitfield (right). Whitfield joined Youth for Christ in 1991 as the urban inner city director. In many years of service with the organization, he has helped to develop urban ministry programs for Fort Wayne, including the formation of the Primetime Community Center. Primetime inspires the youth of Fort Wayne through Campus Life ministries, juvenile justice programs, and sports programming. Whitfield continues to serve Primetime today as its senior director. He is also the senior pastor of New Covenant Worship Center, a church based at the Primetime Community Center.

3. An honorary Doctor of Humane Letters will be presented to 1977 Huntington alum Charles Curie (right). Curie is the principal/owner of The Curie Group LLC in Rockville, Md., which is a management and consulting firm specializing in working with national and international leaders in public and private health care. He is a 1977 graduate of Huntington, with degrees in psychology and sociology; he served as student senate president during his senior year. He also holds a Master of Arts degree from the University of Chicago. In 2001, Curie was nominated by President George W. Bush and unanimously confirmed by the US Senate to head the Substance Abuse and Mental Health Services Administration (SAMHSA).

Dr. Tim Smith (right), Huntington University associate professor of history, will present the baccalaureate sermon at 10:30 am in the fieldhouse. His message is titled “The Empire Strikes Back” and will focus on Ecclesiastes 9:11.

Smith joined the Huntington history and political science department in 2007. He previously taught history at the University of East Anglia in the United Kingdom. His research and teaching focus on British imperial and diplomatic history. He is also the director of the Centre for Non-Western Studies. Smith recently published two books on the Vietnam War titled, “Churchill, America and Vietnam, 1941-45” and “Britain and the Origins of the Vietnam War: UK Policy in Indo-China, 1943-50.”

The commencement exercises and the baccalaureate sermon are open to the public, and no tickets are required.