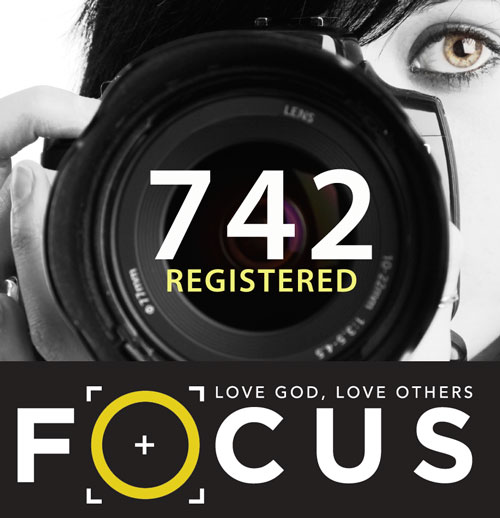 The US National Conference begins on Wednesday, July 6. As of Thursday, June 30, we have 742 people registered. We’re very pleased with that number.

Here is a further breakdown:

The choir will practice on Friday afternoon, 1:30-3:30. The National Conference site has complete information, including the song list and music.

Many of you remember Alan and Doris MacDonald, who were endorsed Global Ministries missionaries with Wycliffe for many years. We just received word that Doris’s mother, Dorothy Au, passed away on June 29, 2011. The MacDonalds currently live in Virginia, where Alan is Pastor of Global Engagement at Fairfax Community Church.

29 Jun Project: A Tiny Guatemala Church with a Huge Vision

Pastor Jaime Chun and his wife may have a tiny model of the church building they are erecting, but they have a huge vision and an immense love for the people of their community in Guatemala.

In 2000, they began this church plant using their musical gifts to draw a crowd. They sacrificed their time and comfort in order to spend time infiltrating their community. The Chuns have lived by faith along with their four children in just two rooms, one as a living space and the other as a bedroom for the entire family. Yet they are always joyful and ready to bless those they meet.

Although unemployment in their area is at 50% and most only work seasonally in the sugar cane fields, the congregation of 80 has purchased a 9×16 meter lot and constructed one level of what they hope will one day be a three-story ministry center.

They are working in stages, so the project has been broken down as $5000 for the second floor, $7500 for the third, and another $7500 to finish the entire structure, interior, etc. Much of their focus is on children’s ministry. Since many cannot attend school, they offer education as well as spiritual care. They hope to even provide housing to orphans as the Lord provides.

If a team would be interested in assisting, it would be best to plan on traveling sometime between October and April to avoid the rain. Accommodations would be very basic, but love would be provided in abundance. 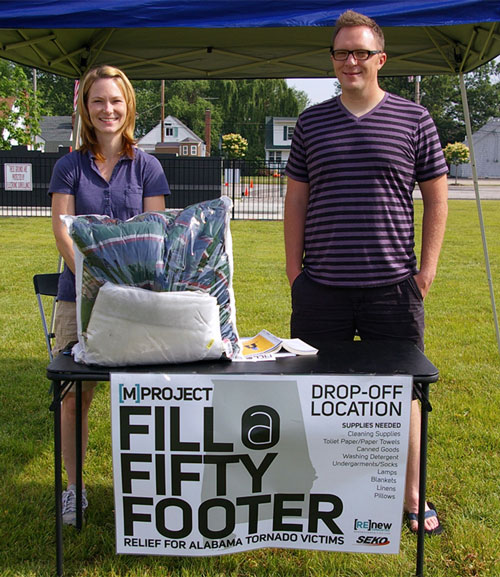 Allison Conners and Andy Sikora, lead pastor of Renew Communities, accept donations at one of the congregation's drop-off locations. The canned goods, cleaning and toiletry supplies will be shipped to aid victims of the April tornadoes in Alabama. (Photo by Joanne Berger, Sun News)

Renew Communities, a church plant in the Cleveland, Ohio, area, has been collecting supplies for victims of the tornados which struck Alabama in April. Their hope is to fill a 50-foot semi trailer and send it to the Holt Relief Center just outside of Tuscaloosa, Ala.

Renew started in April under the leadership of Andy Sikora, and has been averaging 90-100 people. The church was recently featured in the Cleveland Sun News. That article is printed below, with permission.

A local congregation is seeking donations to help victims recover from the devastating tornadoes that hit Alabama in April.

Members plan to fill a 50-foot semi-truck trailer with the donation and deliver them in July.

Andy Sikora, a Berea resident, is lead pastor with Renew Communities, which meets in Polaris Career Center each Sunday. The congregation has partnered with SEKO Worldwide, a freight forwarder firm in Cleveland, in organizing drop-off locations. Sikora said the church, which is about 3½ months old, is “passionate” about helping those in need.

“We believe one of the ways communities are renewed is by working together to meet these needs,” he said. “One of our small groups focuses on how to live out the mission of the Gospel. What better way to do that than by helping others in need, including this project.”

Rob Musial, SEKO’s inbound freight manager, said his company was looking for a project in which to get involved. Musial, a Renew member, said Sikora contacted him about the same time in finding a way to transport the donations. It was perfect timing.

“We gladly donated a truck to pick up the donations and dock space to keep them, and work with suppliers to get some donations as well as transporting the items to Alabama,” Musial said. “It is a perfect fit.”

Allison Connors, a Berea resident, spent a few hours outside the Berea Recreation Center last week accepting donations. She said Ohioans can relate to what occurred in Alabama with the heavy storms and flooding experienced recently in this area.

“We were spared the devastation they experienced,” Connors said. “I am sure they would do the same for us if we were in that situation.”

28 Jun Bishop Waldfogel in the Hospital

Bishop Emeritus Raymond Waldfogel (bishop 1969-1981) is currently in Huntington Parkview Hospital (Huntington, Ind.) with lots of fluid in his lungs. He’ll probably be there through the end of the week. Please remember Ray and Wardena Waldfogel in your prayers. Cards can be sent to: Raymond Waldfogel, 2002 North Ave., Huntington, IN 46750.

Facebook has reached critical mass–over 600 million users worldwide. Lots of people in your church probably use Facebook–far more than you realize. Which begs the question: so what?

Email long ago reached critical mass. If someone was connected to the internet, they probably had an email address. So it made sense to create church email lists as a way to contact people.

Now you should consider adding Facebook to the mix. Your people are already using Facebook–young and old alike. It’s just a matter of going where they already go.

My own church, Anchor Community Church, has been using Facebook for nearly four years. We’ve had our own Facebook Page for two years (a growing number of UB churches have their own Page). Anchor has an attendance of about 130, but have 312 people who “like” our page. We don’t actively promote it. We don’t encourage people to create a Facebook account and come “like” our page. It has just blossomed naturally.

But for me, the benefits of Facebook have little to do with the church page itself. Rather, it’s about people interacting outside of church. Facebook helps promote community, even if it’s only in superficial ways (and on Facebook, there is an abundance of superficial). People who may seldom talk to each other at church may connect regularly on Facebook.

As a layperson at Anchor, I learn a great deal about my fellow Anchorites from Facebook. By reading people’s status messages–things they write which tell something about what’s happening in their life or what they’re thinking about at the moment–I catch numerous glimpses into their life. And that gives me opportunity to interact with them on Facebook and at church.

I learn when people are sick or in the hospital, and how they’re doing as the days pass. I learn about financial hardships, relationship problems, new births, jobs lost and jobs found, myriad concerns, car problems…you name it. I can then respond directly on Facebook, giving encouragement or congratulations or whatever is appropriate.

I learn about hobbies, extended family, favorite sports teams, books they’re reading, TV shows and movies they’re watching, vacation plans, and much more. I can then use this information to strike up a conversation at church, perhaps with someone I don’t know well. Or I can simply comment right on Facebook.

When someone misses church, I send them a note on Facebook saying that I missed them. I compliment people for this and that. Other Anchor people do the same. It’s neat.

When we have special events, I take lots of photos. I post them on the Anchor Facebook page. This draws not only people from the church, but their friends and relatives and distant acquaintances.

And I’m only touching the surface of what you can do with Facebook. Like plugging upcoming events.

It’s not something we officially promote or encourage. It just happens. You don’t see this kind of thing happening with email, Twitter, a church website, or most anything else (young people avoid email, and older people, me included, don’t care to learn all the insider terminology and techniques of Twitter).

With Facebook, you don’t need to goad people into signing up for something new. They’re already signed up. Just go join the conversation. 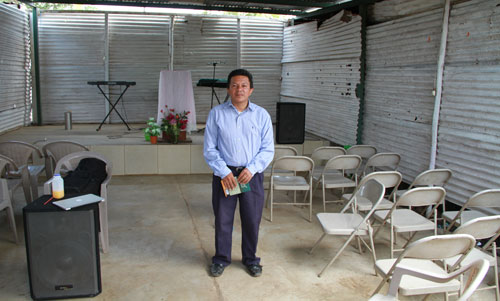 When the church plant began in La Estancia, Pastor Basilio was driving back and forth some two hours from Guatemala City to Escuintla. In the process, he and his family of seven lost their home in the city due to a lack of finances. Today, they live in a very basic shelter next to the church plant.

Although unemployment in their area is at 50% and most only work seasonally in the sugar cane fields, the congregation of 60 has purchased a 6×15 meter lot on which they built a picnic-style shelter where the congregation gathers. In order for the building to be improved, footers need to be poured, walls constructed, and a roof installed. They calculate that it would cost $8000 to make the improvements on the property.

A team would be welcome but would need to recognize that their accommodations would be quite rustic. If you’re up for that kind of challenge, the best time would be during the month of September. Workers are laid off from May until October, and rain is heavy during the summer months. The members of the church can’t offer much, but are willing to volunteer alongside a work team.

20 Jun Teens from Germany Visit the US 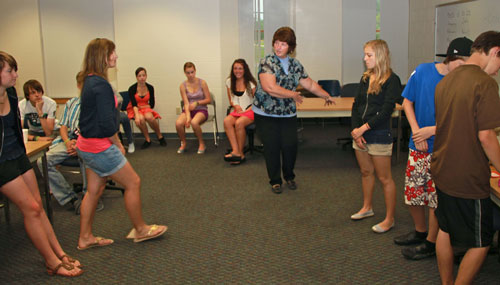 Donna Hollopeter with the teens from Germany (click to enlarge).

Galen and Maritta Fiedler, non-traditional staff with Global Ministries, brought a group of 18 teens and 2 chaperones from the Aloys Henhofer School in Germany. They spent the week of June 13 participating in the regular teen camp at Camp Cobutic in Bellafontaine, Ohio.

They are now spending six days visiting Huntington University. During their time in Indiana, they’ll visit Shipshewana, the Fort Wayne Zoo, and get a special tour of the Indianapolis Motor Speedway.

In the mornings, Donna Hollopeter is offering some fun English learning activities. Donna was among the first to receive a TESOL Certificate (Teaching English to Speakers of Other Languages) from the Institute for TESOL Studies at Huntington University.