How would we recap the decade for the United Brethren church? Here are ten UB highlights of the decade, in roughly chronological order.

2001 General Conference. This was a historic conference. We adopted a true international structure, with 7 autonomous national conferences joined together by the Confession of Faith and an international constitution. Huntington, Ind., stopped being the United Brethren “world” headquarters, and became just the US headquarters. No longer does United Brethrenism revolve around the United States. Colonialism: RIP.

Open Theism. A whole lot of turbulence arose around Dr. John Sanders, a professor at Huntington University who was a leading proponent of what is called Open Theism. United Brethren theology clashed, hard, with academic freedom. Both church and college came under criticism from the broader evangelical community. In the end, an exit strategy was worked out for Dr. Sanders, and both church and college began mending the wounds.

Joining the Missionary Church. In early 2003, the UB Executive Leadership Team voted to pursue merging our denomination into the Missionary Church, a like-minded, larger denomination based in Fort Wayne, Ind. As leadership pushed this initiative, a group called UB Hope arose to rally people against it. Ultimately, UB members voted it down in a referendum, 56%-44%. This set the stage for lots of soul-searching about why we exist and the adoption of a whole new structure.

END_OF_DOCUMENT_TOKEN_TO_BE_REPLACED

“Pray for Rev. George Rhodifer (right) today at 10:30 am. He is having a procedure done on his esophagus. He has been fighting the fight against cancer, and he’s winning. We just want everyone to pray for him today at 10:30.” 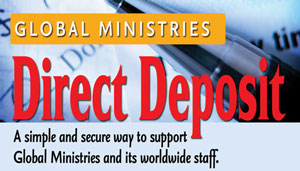 Now, you can use Direct Deposit to support the work of Global Ministries. Donations, including monthly support for individuals, can be transferred automatically from your bank account.

No checks to write. No stamps to find, or envelopes to address. You don’t even need to remember that your support is due. It all happens automatically. And it’s very secure.

Learn more and sign up from the Global Ministries site.

28 Dec The Eve of Christmas Eve

Michael Mitchell of Lighthouse Community (Williamston, Mich.) says. “We always have a Christmas Eve’s Eve Candlelight service on the night before Christmas Eve, with desserts and appetizers afterwards. That way, everyone can be with their families on Christmas Eve and still be with their church family during this special season.”

Barry Skinner, pastor of Kilburn Avenue UB (Rockford, Ill.), reported concerning their Christmas activities: “Our annual nativity walk went well December 12-13. We had over 650 nativity sets and scenes from around the world. The church gave out cookies, drinks, and candy canes along with a nativity story book and three-dimensional nativity scenes with instructions for assembling them.

“We did a series (4 weeks) on the true Christmas story about the character of Mary, Joseph, the wise men, and the shepherds and wrapped it up with the reason Christ came.” 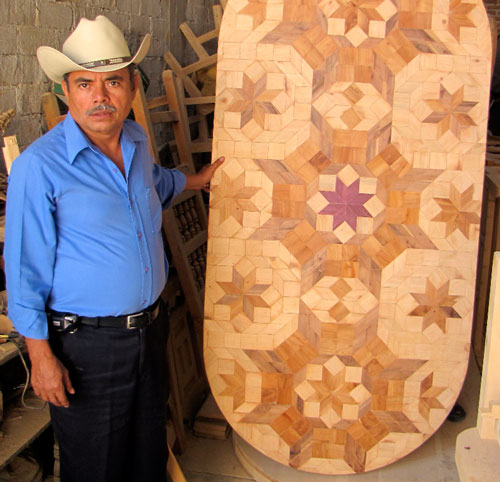 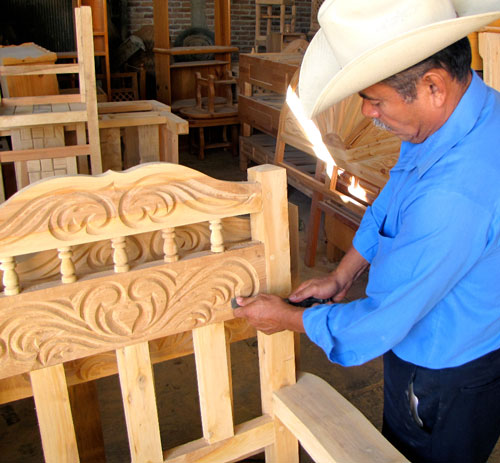 Pastor Anacleto is both a church planter and artisan. When he is not leading his congregation in Queretaro, Mexico, he is supporting himself and his family by building rustic furniture.

I work a little with wood, but have a ton of power tools that make me look pretty good. Pastor Anacleto does all of his work by hand, including the carving you see in this photo. He has no power tools.

All our pastors in Mexico are bi-vocational and nearly all consider themselves first and foremost church planters. As one pastor asked me, “Aren’t all pastors church planters?”

Ruth Ann Price reports that in December, she began a reduced assignment with Wycliffe Bible Translators.

Ruth Ann is an endorsed UB missionary who has spent nearly her entire adult career with Wycliffe. She is also a member of the Global Ministries Leadership Team.

Ruth Ann says, “I do not plan to retire now (I’m having too much fun doing what I do), but I will continue part-time as long as God gives me good health, to contribute to the caue of Bible translation and sharing Christ globally.”

A few weeks ago, we reported that Sandy Whipple, wife of Bishop Phil Whipple, was undergoing a heart catheterization. The surgery on November 26 went well. They found no blockage in the heart, which was a relief.

The problem involves an irregular heart rhythm, which doctors are regulating with medication. They are doing tests to determine the best medication to use. 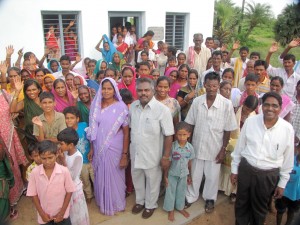 At one of our church plants.

While visiting in India recently, I had the opportunity to visit a number of churches in a tribal region. Each group we visited had been waiting patiently for our arrival.

As we approached the first tiny building, I wondered just how many people might be inside. My first clue came when I encountered a huge pile of sandals outside the door.

Seems East Indians are not nearly as concerned about personal space as we are in the West. The building was full to overflowing with people sitting on rice bags on the floor. There are currently thirteen such churches, and we have opportunity to plant more in the near future.

Tom Mahas, youth pastor at Bethel UB (Elmore, Ohio), was approved for his local church license December 17, 2009. Cluster Leader Brad Kittle, pastor of The ROCK (Findlay, Ohio), will present it to him soon.

Tom is the guy who headed up the youth activities at the 2007 and 2009 US National Conferences.