Dan and Nancy Paternoster posted this January 27 update on Dan. As reported previously, Dan was in a serious bicycle accident in August, and cancer was discovered in the process. A couple months later, Nancy was diagnosed with breast cancer. Dan is a member of the denominational Executive Leadership Team. He and Nancy are from Fowlerville UB church in Fowlerville, Mich. 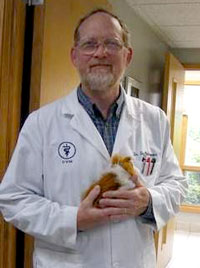 Much has happened this past month. The first week of January we made the rounds of the cancer specialists and decided that we were not pursuing any further treatment for Nancy’s breast cancer at this point. All the cancer was removed during the biopsy, and no futher cancer was found during the subsequent surgery. There will be follow-up mammograms every six months for a few years.

Dan had his bladder scoped mid-January, and the urologist saw a “rough” spot which wasn’t normal. He wasn’t sure if it was a reaction to the chemo treatments, scar tissue from his previous surgery in October, or a cancerous growth. It appeared to be in the same location as the previous tumor. So, this past week Dan had another bladder biopsy and we’re waiting for the results.

Earlier last week, Dan had an EMG and it was determined that there is regrowth in the nerve roots on his left side. The doctor who did the test called every resident, student, etc. in his office to see Dan, because it’s rare to see this kind of regeneration after such severe damage. The damage to these roots is what’s causing his inability to lift his left arm past shoulder height. We’re thankful for this good news and looking forward to complete use of his left shoulder, arm, and hand again.

The ENT doctor visit confirmed that Dan has excellent hearing, but the humming in his ear is something that will always be there. The change in the shape of his ear canal is due to some cartilage from his jaw (probably when it was dislocated in the accident) pushing on his ear. It doesn’t make a difference with his hearing, but will most likely lead to arthritis in his jaw.

Dan’s biggest hurdle to returning back to work and normal life is his vision in his left eye. He still has double vision most of the time and is scheduled to see a specialist in February.