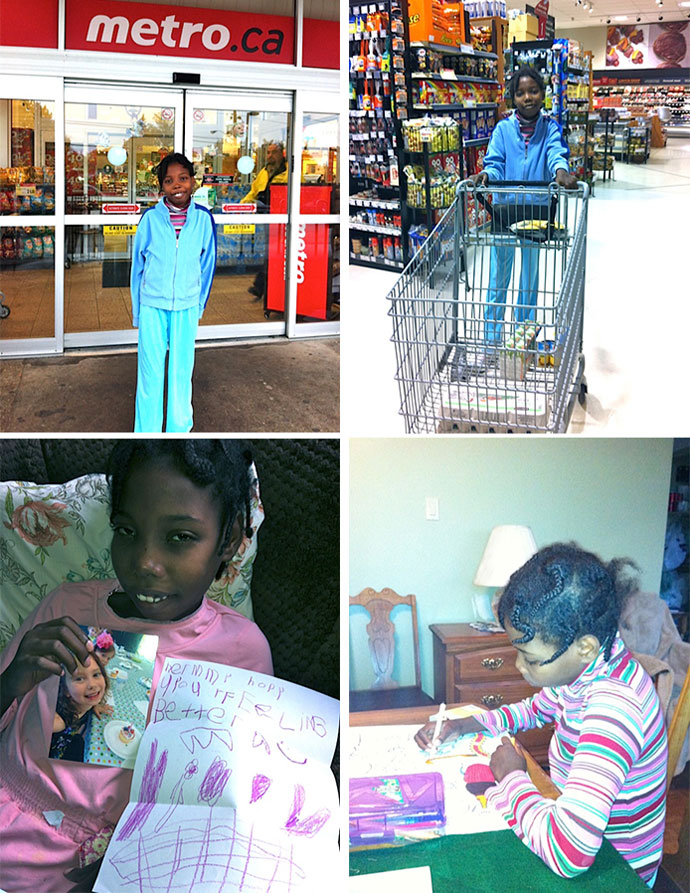 Joan Sider sent this update on Hermmy on Thursday, October 25. Hermmy, a Haitian girl, was brought to Canada by the UB churches of Canada so that she could undergo an operation to repair a hole in her heart. That operation occurred October 10, and she came “home” to Joan’s place on Monday, October 15.

Can you believe it was only two weeks yesterday that Hermmy had her operation? I find that nearly impossible to grasp. The progress she is making is phenomenal.

We went shopping Tuesday afternoon, and after coming out with a few bags of groceries, Hermmy grabbed one of the bags and carried it to the car. There was no prompting on my part to do so. She smiled broadly as she did it. She knows that she is getting strength that she’s not had before. I kidded her that the next shopping day, she’d have to carry two bags.

Her greatest joy comes from watching movies on either my laptop or the iPad as the pics will show.

Wednesday was another library day. Hermmy is getting used to this trip–returning and picking up more DVDs.

Today (Thursday), I was able to teach for the morning. It was good to get back in the classroom. When I came home, I broke the news to Hermmy that this was going to be a shower and hair washing day. As expected, this was not welcome news. However, I am happy to say that all is well, and believe it or not, I put her hair into a pony tail–looks a little off, but she wasn’t unhappy. She didn’t seem to have the energy yet to do anything with her own hair.

Food continues to be an area where we aren’t having the greatest success. Swiss Chalet rice is the only rice she has enjoyed, scrambled eggs with ketchup, chicken noodle soup, popcorn and FudgeeO chocolate cookies are her favourites. Pineapple and orange juices and water are her favourite beverages.

As I write this, we are watching the last of the third season’s Emily of New Moon. This is the activity we do just before Hermmy’s bedtime.

Thanks again for the words of encouragement that many of you are sending our way. We know you are praying for us, and it is greatly appreciated. We’re continuing to ask God for Hermmy’s healing outside and particularly inside.