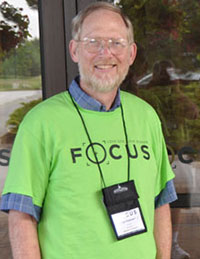 Dan Paternoster, serving as a greeter at the 2011 US National Conference.

We’ve not updated you on Dan Paternoster in a while. Dan, a veterinarian from Fowlerville, Mich., was hit by a car on August 28 while he was riding his bike. He has been a member of the Executive Leadership Team since 2001. The ELT met earlier this week, and missed his presence and valued input.

Here are a few updates from this week from Dan’s wife, Nancy. They include the troubling news that Dan, on top of his serious physical injuries, may also have cancer.

Monday, October 8. Dan continues to amaze the therapists with how well he is doing with walking. Today’s challenge was to walk toe-heel, which really tests your balance, especially when you can’t look down due to your neck brace. Speech is coming along too, but still much slower than the physical progress.

Wednesday, October 10. Just talked to the surgeon who removed a tumor from the lining of Dan’s bladder. It hadn’t spread to any other part of his body yet, for which we are grateful. Dan says he hopes the doctor got all of it. He’s in a lot of pain right now after surgery.

Thursday, October 11. Dan’s feeling better today–not as much pain as yesterday. Thanks for your prayers. I’ll attempt to fill in some of the blanks that I created yesterday with my message.

The surgeon doesn’t know how long the tumor was there, but didn’t think it was there more than a few months. Was it a result of the accident? Only God knows. He also said that he was 85% sure that it was cancerous, so Dan was given a chemotherapy treatment right after the surgery. Evidently that is what caused much of the pain yesterday. We were told that Dan would feel more pain today, but that is not the case. He’s feeling tired, but good other than that.

We’re to the point now where Dan is realizing what is going on and how far he still has to go. What he doesn’t realize is how far he’s come already! We were informed today that his medical team feels he could benefit from 3-4 more weeks of rehabilitation here. That will take us to the end of October/beginning of November.

It’s hard to live apart like this. Dan asks me every night who is at the house where I’m staying and offers to come home with me. He’s also concerned about getting to the point where he can work at a job so that we can go out to eat and he can pay for it. These are all signs of Dan returning to normal.