Joan Sider has made many trips to Haiti with her fellow Canadians. Now she’s there again, this time with a team of 12 persons from Canada, plus one from Honduras. They are working on the Delmas church in Port au Prince.

Mamei was brought back to the Cardiac Intensive Care Unit a little before 3:30 pm. The surgeon reported that the surgery went well. He replaced the defective heart valve. Mamei was still on the ventilator when we were allowed to see her around 4:40.

Mamei is in good hands with two nurses guarding her over the next 12 hours and one nurse with her 24 hours while she is in the Intensive care unit.

Here are three ways you can pray:

Prior to Mamei being wheeled from her room of 4 weeks, Rev. Joe Abu came and together we read the 23rd Psalm and prayed and sang songs of assurance. We are truly grateful for the Scriptures and the assurance given to us by so many of you.

The Third Lausanne Congress on World Evangelization is approaching. It will be held in Cape Town, South Africa, October 16-25, 2010. Jeff Bleijerveld, Director of Global Ministries, has been invited to take part, and will do so, joining 4500 Christian leaders from around the world.

Doug Birdsall (right), who grew up in a United Brethren pastor’s home and is now executive chair of the Lausanne Movement, sent these three prayer requests.

However, there is a possibility that the Chinese participants will not be able to attend. Please intercede on behalf of the Church in China, that God would move the hearts of those who hold the power to change the situation. The prayer of the  Chinese participants is that they would be a blessing to their nation and to the global church, that together we might be an expression of unity in Christ. 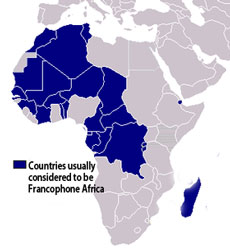 2. Francophone Africa. A number of African countries were colonized by France and Belgium, and French remains widely spoken (though mostly as a second language). An estimated 115 million Africans speak French, more than in Europe. These countries, shown in purple on the map to the right, are known as Francophone Africa.

It is anticipated that at Cape Town 2010, there will be more Francophone Africa evangelical leaders gathered together than ever before in history. However, obtaining visas has been delayed to nearly the last minute in this region. Please pray that the visa process will be expedited for these brothers and sisters.

3. Final Phase of Funding. An additional $1.5 million is needed to fund the Congress. Please pray that this money will come in before the Congress. Doug Birdsall writes, “When I visited Billy Graham two weeks ago, he asked about the fund-raising progress. When I told him we had passed the 90% mark, he raised his hands and said, ‘Hallelujah, that’s wonderful! Please let me know when you get to 100% – and I hope it’s real soon!’  Let’s pray and work and give so that we can send Billy Graham that good news very soon.”

We’re beginning work on a redesign of the UB.org website, the official website of the United Brethren in Christ Church, USA. The current design has been in place for over 5 years. Time for an upgrade.

We want your suggestions as we begin developing a new flagship site.

Please send your suggestions to Steve Dennie, the Communications director.

Anything is fair game. So fire away!

06 Oct Traveling Along the Trigris River

Jeff Bleijerveld, Director of Global Ministries, is currently Turkey. He is traveling with Kurt Uhen, a member of the Global Ministries Leadership Team who is from Emmanuel UB in Fort Wayne, Ind.

We’re on the road headed for Mardin. Our route follows the path of the Tigris river headed south and is flanked by cotton fields, flocks of sheep, and herds of cattle. Stork nest on telephone poles and the roofs of homes.

The headwaters of the Tigris and Euphrates Rivers are located in Turkey. It is here that the Garden of Eden is believed to have been located. We spoke with Turks who have traveled that region extensively, but none have encountered any angels with flaming swords.

We’ve had some great conversations with the very few pastors and church planters in the area. All are eager to make disciples and plant more churches. We’ve also discussed some “business as mission” opportunities that would help this take place.

Mardin overlooks the northern plains of Syria and has a mix of Kurds, Turks, Assyrians, Syriacs, Arabs, and a few Armenians. Tonight we’ll stay at a 5th century Assyrian Orthodox monastery. Originally a sun temple, it became a Christian church when believers from Antioch moved north and the region was won to Christ.

Thanks for your prayers. God is at work in Turkey. We’re praying earnestly for discernment as we consider whether the United Brethren have a part to play.

Mamei Simbo, wife of Sierra Leone Bishop Billy Simbo, will undergo heart surgery Wednesday, October 6, at 8 am. The surgery, to replace a damaged valve, will be done at Abington Memorial Hospital in Abington, Pa.

Mamei entered Abington Hospital five weeks ago. She was diagnosed with a bacterial infection, which probably started at the IV port installed so she could begin chemotherapy for the multiple myeloma she has had since 2007. The infection spread to her knee and then to an aortic valve.

After three surgeries, the infection was removed from her knee. But the damage to the heart valve remained. She was scheduled for a valve replacement last week, but picked up another infection, which postponed the surgery. That infection has now been cleared.

On Monday, October 4, the family held a consultation with the cardiac surgeon about the defective valve, which was leaking and causing the heart to work extra hard. Mamei agreed to go ahead with the heart surgery.

Please be in prayer for Mamei. Billy sent these specific ways to pray:

Billy adds, “Thank you all for your continued prayers and encouragement. It is so good to put our trust in the Lord, as many of you have reminded us through cards and gifts.”

05 Oct A Meal in Eastern Turkey 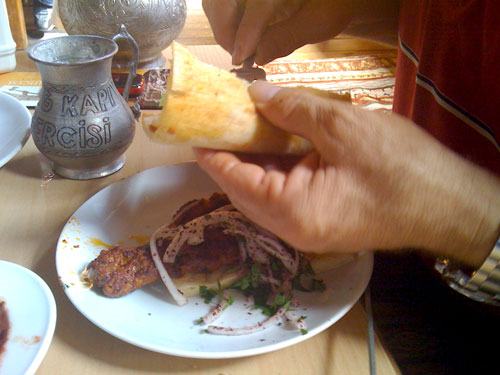 Jeff Bleijerveld and Kurt Uhen, from Emmanuel UB (Fort Wayne, Ind.), are currently traveling in Turkey. Jeff sent this photo, with this note: “We just came back from church and a great lunch of lamb liver and chicken kabobs. It was great! Behnan’s mug of fermented goat yogurt is to the top left. I passed on that.”

The Pastoral Ministry Leadership Team is meeting October 4-5 (Monday and Tuesday) in Huntington, Ind. The PMLT is responsible for issues related to pastoral education, licensing, and ordination. Lee Rhodes, pastor of Countryside UB (Breckenridge, Mich.), is the chairman.

At a church service in eastern Turkey

99% of the people in this eastern Turkish city are ethnic Kurds of Syrian, Armenian, and Iraqi origin. However, the official language is Turkish, so Kurdish is only spoken in the home and among friends.

We had a very Mediterranean breakfast with lots of olives, melon, fresh cheeses, and breads. We headed for church at 11 am. This church has a police officer assigned for security 24 hours a day. However, things are quite tranquil at present as the PKK (Kurdish separatist organization) has declared a 30-day ceasefire with the Turkish government.

There are 73 million people in Turkey.