Retired minister, Jim Sturgeon, has discontinued dialysis as of last Wednesday, the family reports. Hospice care has begun and he is ready to go be with the Lord. Please hold Jim and his family up in prayer during this time of transition.

You can send cards to:

A group of 12 persons from Canada, plus one from Honduras, spent nearly two weeks in Haiti earlier this month working at the Delmas church in Port au Prince. Team member Joan Sider wrote about the trip each day and took photos.

The 2010 Mid-Atlantic Pastoral Resource Day will be held November 7-8 at Rhodes Grove Camop and Conference Center in Chambersburg, Pa. The speakers will be:

The Huntington University Board of Trustees chose new officers and some new members during its meeting on October 15.

Kelly Savage (right) is the new chair of the Board of Trustees. She is the first woman to serve in that post in the university’s 113-year history. She replaces Ed Souers, chairman for the past six years.

Savage is the vice president for global human resources at Amway Corp. in Ada, Mich. She is a 1983 graduate of Huntington University with a bachelor’s degree in accounting, and she also holds an MBA from Colorado State University. She has served on the HU board since 2001 and as the vice chair since 2004.

Nancy Hull, a 1974 graduate and the 2010 Alumnus of the Year, was elected secretary of the HU Board of Trustees. She is assistant professor of English at Calvin College in Grand Rapids, Mich.

Three new board members were also elected at the October meeting: 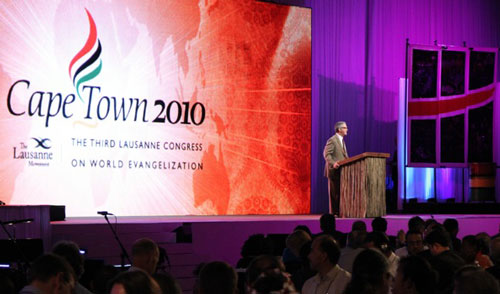 The opening of the Third Lausanne Congress on World Evangelization 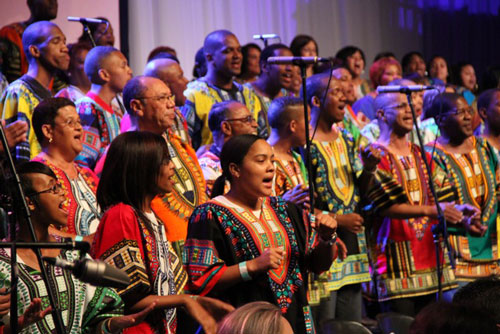 A South African choir during the opening service of Cape Town 2010.

Jeff Bleijerveld is in Cape Town, South Africa, representing the United Brethren Church as one of 4000 participants selected from 200 countries.

With more than 4000 participants and more than a thousand observers from the media, the Vatican, Orthodox and other religious groups, the Congress is one of the largest gatherings of Christian workers in the history of the evangelical Church. Wonderfully “missional” musical pieces were prepared and performed by a multi-national orchestra and a 120-voice South African choir.

All participants meet around tables of six from various regions of the world. The room we are in has more than 800 tables. My table is represented by delegates from Malta, Bangladesh, Slovakia, and Myanmar.

This morning (Monday), we began dealing with the question of truth and specifically making the case for the truth of Christ in a pluralistic, globalized world. Having read papers on the subject in advance and hearing follow-up lectures from various speakers, we began to deal with the challenges and opportunities faced in each of the countries we represent. It was a great time of sharing, learning, and praying for one another.

All senior pastor and churches are required to participate in a cluster, which is generally a group of senior pastors from 6-8 churches. During the past year, Dennis Miller (right), senior pastor of Emmanuel Community Church (Fort Wayne, Ind.), has been working one day a week as Director of Clusters. In that role he oversees the cluster system.

The cluster strategy was reorganized this year, with four types of clusters:

Here are some items from Denny Miller’s written and oral report to the Executive Leadership Team on October 12.

Information about the cluster system and the constituents of the various groups is given on the UB website.

Three changes have occurred at Laurel Mission in Big Laurel, Kent., all within the Boggs family.

Billy Simbo, bishop of Sierra Leone Conference, sent this report about his wife, Mamei, who has been hospitalized for about six weeks in Abington, Pa.

As I write this today, we have experienced a setback in Mamei’s care and recovery.

On Wednesday, October 12, we were all excited and rejoicing as they moved Mamei from the Cardiac Surgical Unit to a new unit dubbed “The Penthouse” by the staff because it is in the newest building at the hospital and on the fifth floor. I had her settled in and stayed with her until after 10:00 Wednesday night.

But Thursday afternoon, she was having trouble breathing and they had to sedate her and put her back on the ventilator. She had a very high temperature. So Thursday night  they brought her back to the Cardiac Intensive Care Unit. She is currently under sedation and on the ventilator. She had dialysis done Friday morning and we are awaiting test results to see if there is an infection that is causing her high temperatures. She does have some kind of pneumonia that is causing a build-up in her lungs, so they have put her on massive doses of antibiotics again.

I have to be honest and admit that this is a setback and a disappointing one, because we had seen so much progress. But we will continue to trust and not give up.

Please pray and intercede for the current situation.

On November 19-21, all teens are invited to attend the annual teen retreat at Camp Cotubic (Bellefontaine, Ohio). Cost for the weekend is $75. You can register on the camp’s website.