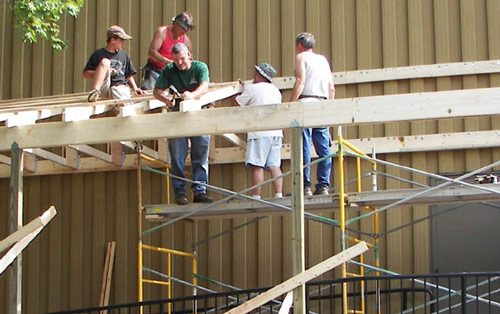 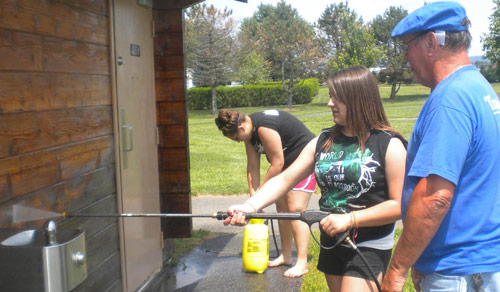 Serve FEST was directed by Amy Moreno (right), Associate Pastor of Christian Education at Bethany Evangelical Church. She also led teaching and worship experiences each evening for the work teams. The teams were fed by volunteers from Bethany.

“We were seeking to find tangible ways we could express the love of Christ while exposing our teens to the needs in our local mission field,” says Pastor Paul Dunbar.

A post nearly two years ago told about the Oliver 1850 tractor that Randy Fennig took to Sierra Leone in 2008. But now you can hear Randy tell the tractor’s story in person in this two-minute video. The tractor is used in agricultural development in Sierra Leone.

Franklin UB (New Albany, Ohio) held its annual Faith and Freedom Sunday on July 27. Pastor Mike Brown says they use the service to to celebrate our God-given freedoms and honor those in the military who fought to keep them. Local leaders and politicians are invited. They also have “Guests of Honor.”

This year, they honored the Tuskegee Airmen, the military’s first black pilots. However, none of the nine surviving Tuskegee airmen from the Ohio chapter were able to attend–most would now be in their 90s.

Bishop Emeritus Wilber Sites was admitted to the Intensive Care unit at the Chambersburg Hospital (Chambersburg, Pa.) on Sunday, June 27, for a G I Bleed (diverticulitis). The bleeding has now stopped he is stable. They expect a few days’ hospitalization to keep a watchful eye on him and to gain strength. Please continue to pray for his quick healing and recovery.

23 Jun Happy Birthday to You

About 50 women have now registered for the UB Women’s Conference, scheduled for September 17-19 in Lancaster, Pa. New registrations will begin surging in now.

To read about the conference, and to register, please go to the Women’s Ministry website.

21 Jun Medical Team Back from Honduras 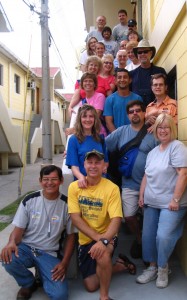 The 19 members of the Honduras Medical Team returned to the States Saturday night, June 19. Co-leader Robert Cassidy called Donna Hollopeter in the Global Ministries office with an updated report.

Thirteen people from the Mt. Pleasant Church (Chambersburg, Pa.) are headed to Zacapu, Mexico, July 15-26. They are beginning a partnership with a sister United Brethren in the Mexico National Conference. During their 11 days in Mexico, they will do some construction on the church and run a week of Vacation Bible School. A Facebook page is devoted to the trip.

17 Jun Another 800+ People Treated in Honduras

Donna Hollopeter received a call this morning from Robert Cassidy, co-leader of the Honduras Medical Team which is currently at work in Honduras.

On Wednesday, June 16, they held their fourth clinic, this one in the seaside city of Puerto Cortes. They saw 804 people. That brings the total persons treated thus far to 2328.

One member of the team brought 600 pairs of eye-glasses. They are all gone.

Robert reports that everybody is in good health, that the clinics are well-organized, and that Rev. Benulda Saenz, the Honduran district leader in whose district these clinics are being held, has been terrific to work with.

Today, June 17, the team will hold their fifth and final clinic in a small village outside of San Pedro Sula.