Steve Dennie, the UB Communications Director, is undergoing surgery May 5 for a torn cartilage in his left knee. It’ll put him on crutches for a few days, and keep him out of the office at least through the weekend. The surgery’s at around 8 a.m.

On April 16, Steve had surgery in which an “endolymphatic shunt” was placed behind his left ear. Since 2004, Steve has battled Meniere’s Disease, which causes vertigo, hearing loss, and a constant ringing in his left ear. The vertigo can be incapacitating at times. There is no cure for Meniere’s, but several surgical procedures can lessen the symptoms. The endolymphatic shunt is the least invasive procedure and has a high success rate.

Everything went well with that surgery, but it’s still too early to tell how much affect it will have in preventing future spells of vertigo. But, he’s pretty sure he’s noticed a positive improvement already.

Randy Carpenter (right) has been named senior pastor of Sunfield UB (Sunfield, Mich.). His first Sunday will be May 9. Randy is a 1990 graduate of Huntington University, and holds Masters degrees from Huntington University and from Winebrenner Theological Seminary (Findlay, Ohio). He was ordained in 1993.

Randy has served as senior pastor at two other UB churches:

03 May Eavesdrop on the Worship Summit

The UB Worship Summit is underway in Daytona, Fla., and you can follow along. They will be blogging live on Tuesday and Wednesday mornings.  Go to www.worship360.wordpress.com to follow the action.  You can be ready to go by going to the site and clicking on the link.  That will take you to Cover it Live where you can sign up and get email reminders if needed.  The sessions are as follows:

The first Worship Summit starts today in Daytona, Fla. It is designed for ministers working in the areas of worship and music. 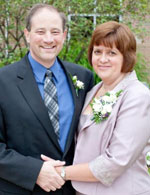 Mark Wilson has been named senior pastor of Fowlerville UB (Fowlerville, Mich.). He grew up in a pastor’s home, graduated in 1989 from United Wesleyan College (Allentown, Pa.) with a degree in Pastoral Ministry, and was ordained by the Wesleyan Church in 1991 after two years of service.

Mark and his wife, Carla, have three daughters, ages 22-25 (two of them married).