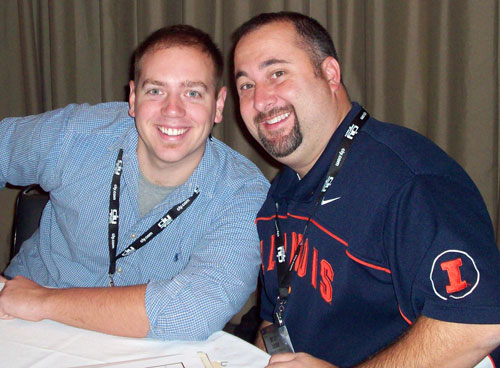 Brian Leslie and Eric Carter were two of the four students who graduated from Huntington University May 15 with Master of Arts degrees in Youth Ministry Leadership. This is the first class to graduate from this online hybrid program.

As youth ministers, Leslie and Carter were already skilled in their crafts, but conferences and seminars were not pushing them to the next level. Their online search brought them to Huntington.

“I felt like there was more out there as far as a deeper level of study,” said Carter, 27, who currently works as a junior-senior high youth minister at Plainfield Christian Church in Comstock Park, Mich., outside of Grand Rapids. “Where a conference is okay, this just adds a greater level of depth.”

Leslie, 38, who works as a youth minister in Plainfield, Ind., (an unaffiliated church also called Plainfield Christian Church, oddly enough), said Huntington’s program stood out from all the others. Here, professors dialog with students, the work is more challenging, and camaraderie is created among students.

“For me, it’s about continuing to do youth ministry in my local context but with better tools,” Leslie said.

“I just don’t know if you would get that everywhere,” Carter said.

Carter, interestingly, had previously worked under Leslie as an intern before beginning his fulltime work in ministry in 2004.

Both Leslie and Carter admit that the last four years have not been easy. They have juggled jobs and families on top of classes and other assignments. But they admit, it has been a rewarding experience that they would not trade, especially since they were able to do it together.

17 May This and That

15 May Graduation Day at Huntington University 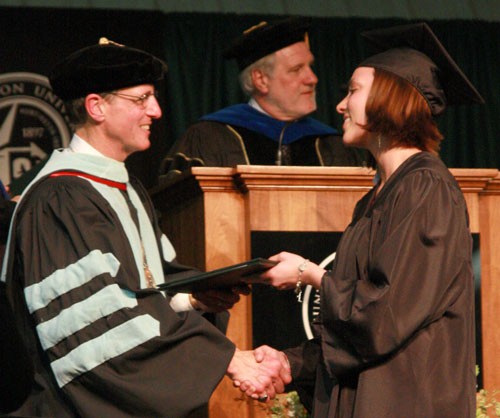 Dr. G. Blair Dowden presents a diploma to a student. 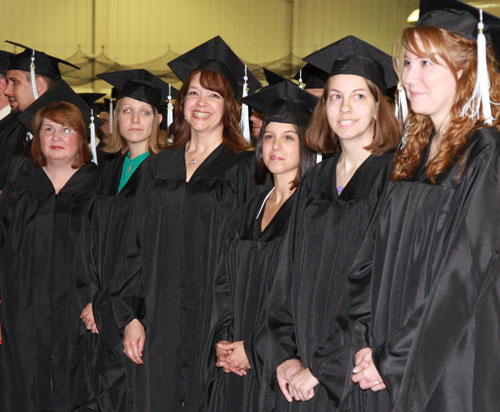 Some of the graduates waiting to hear their name called.

Honorary degrees were also given to Dr. Herma B. Williams, provost and academic vice president for Fresno Pacific University in Fresno, Calif., and Donald Duff, Huntington University Board of Trustees chairman emeritus.

As commencement speaker, Williams addressed the graduates and asked them what their roles will be in shaping the future.

“Will you lead a life that matters?” Williams asked of the students.

Her addressed was titled, “Shaping the Future: Leading a Life that Matters.”

The afternoon commencement followed the morning baccalaureate service where Martha Smith, Huntington University associate dean of students, challenged the students to trust God today for the plans that he has for them. Her sermon was titled, “The Calling is Now.”

14 May 95% of HU Education Grads Employed After 1 Year

Impressive: 95 percent of graduates from Huntington University’s education program were employed in an education-related position in less than one year after graduation. That’s from a study of 110 HU graduates from the past three years (2007-2009).

13 May Ministering to Migrant Children in Thailand

Rev. and Mrs. Lee with children of migrant workers in Thailand, plus their visitors from the US and China. Jeff Bleijerveld is in back, wearing a green shirt. Teacher Lee is just to the left, with his three children and wife next to him (click to enlarge).

For the Ahka People of Northern Thailand, making a living often requires a willingness to go where work can be found. In order to minister to families in these mountain villages, Rev. and Mrs. Lee have opened their home to the children of migrant workers.

Rev. Lee told us that in the first years of ministry in this region, people were quite resistant to them and the message of the gospel. Providing love and care to the children of migrant workers opened hearts. Many of the founding members of the two UB churches were migrant workers who entrusted their children to the Lees’ care.

A recent donation that came from the Center Hill UB Church in Illinois, at the time of its closing, made it possible to upgrade the bathrooms and dormitories and buy new bunk beds. When we visited recently, 26 children were living with the Lees.

13 May Julie Goetz Staff Member of the Year

Julie Goetz, coordinator of online education, has been named Huntington University’s 2010 Staff Member of the Year.

13 May Among the Brethren in the Golden Triangle 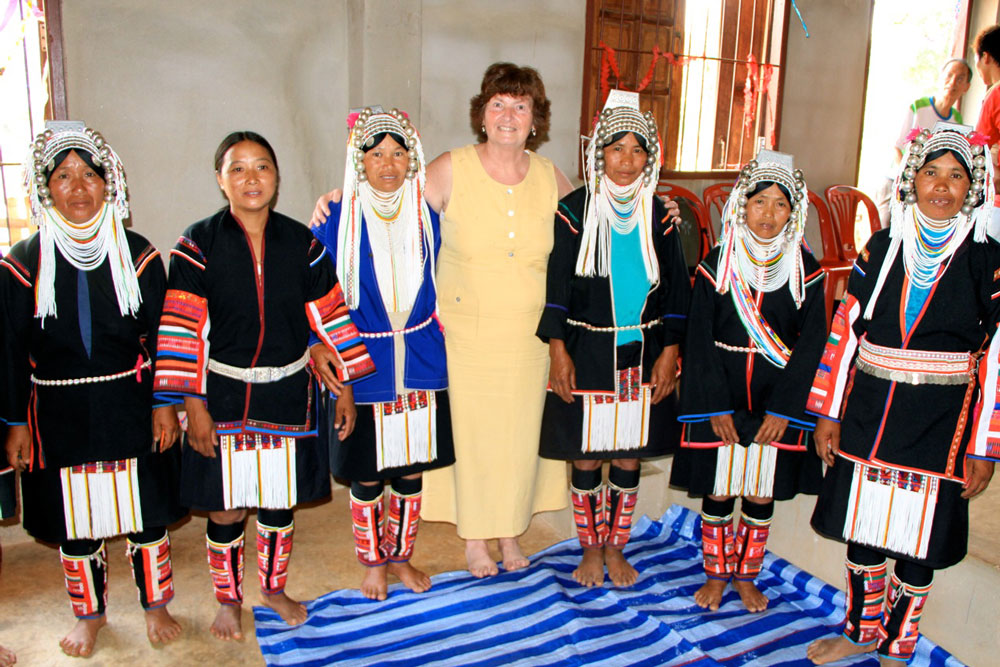 Donna Hollopeter looked quite comfortable connecting with ladies at the Paraprai UB Church in Northern Thailand. The church was packed on Sunday morning during our visit last week, and some even wore the traditional Ahka dress for the visitors.

Hong Kong missionaries Rev. and Mrs. Lee have been reaching out to the Ahka people in the mountain villages located in the infamous “Golden Triangle.” We currently have two churches–one with a membership of 300 and another with 100 members. Rev. Lee intends to plant the next new church among ethnic Chinese in the region.

“It’s part of who we are as an institution. It’s a reflection of our Christ-centered values,” said Grace McBrayer, director of first year students and volunteer services at Huntington University.

Huntington University’s Joe Mertz Center for Volunteer Service tracks the hours that are volunteered by the campus at locations such as Youth for Christ, Huntington Kid’s Club, the Love Church in Fort Wayne, the Adopt a Grandparent program, Habitat for Humanity, and Volunteer 911, which is an on-campus ministry to provide assistance to the community by filling requests ranging from baby sitting to yard work and home maintenance. Students, faculty, and staff also volunteer each semester during the fall and spring work days. Spring break and fall break trips also contribute to this count.

The Joe Mertz Center for Volunteer Service is a student-directed organization that mobilizes the campus community for Christian service. It was founded in 1992 through a grant. Each year, more than 70 percent of resident students are involved in some form of volunteer service.

12 May Generosity from Our International Conferences

Our partner conferences continue to provide generously for the needs in Haiti and around the world. Rev. Owen Gordon, president of Jamaica Bible College, came to Indiana a few weeks ago to attend Huntington University board meetings. He delivered gifts of $872 for Haiti and $1147 for the Philippines. This is in addition to the initial gift of $6000 they provided for Haiti immediately following the earthquake in January.

Then last week, while traveling in Myanmar and Thailand with Rev. Mark Choi, director of missions for Hong Kong Conference, a gift of $7900 was delivered for Haiti Relief.

Tomorrow (May 13), I will travel to Haiti with Paul Plato, Joan Sider, and Jeff Gordon of our Canadian Conference. We will assess the needs and, along with Rev. Oliam Richard, our national leader, determine the most effective way to help our churches and their communities move forward.

Rev. Ed Sider, director of CH Global, will also be there to participate in our discussions. CH Global is our partner in matching sponsors with needy children and their families. This ministry works hand-in-hand with our local United Brethren churches and provides a long-term solution to the problem of poverty.

12 May Death of Darwin Dunten’s Father

Darwin Dunten, pastor of Findlay First UB church (Findlay, Ohio), is mourning the passing of his father. David Dunten passed away Monday evening, May 10, after a long battle with Lewy Body disease.