12 May A Visit to Myanmar 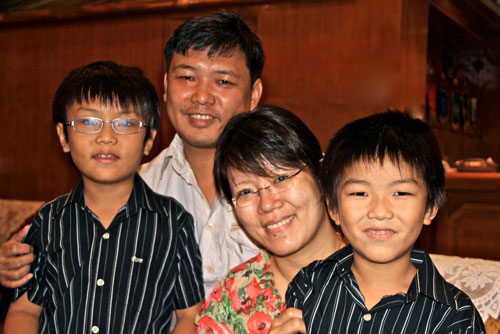 "Teddy and Helen" and family in Myanmar

During the past week, it was a privilege to visit staff in both Myanmar and Northern Thailand with Rev. Mark Choi, the Hong Kong Mission Director. My other traveling companions included Donna and Jason Hollopeter, one member of Living Water UB Church in Macau, and two United Brethren members from Hong Kong.

Although we can’t disclose the names of these family members, many of you will recognize them as overseas staff from our Hong Kong Conference serving in Yangon, Myanmar. “Teddy” serves as the director of a team of 42 workers (both nationals and foreigners), and he mentors four pastors of local churches.

They use English classes to open doors and develop relationships. Thousands of university students have been through their classes and even listen with interest to the devotional thoughts from the Bible. In fact, they currently have an English class just for Buddhist monks. 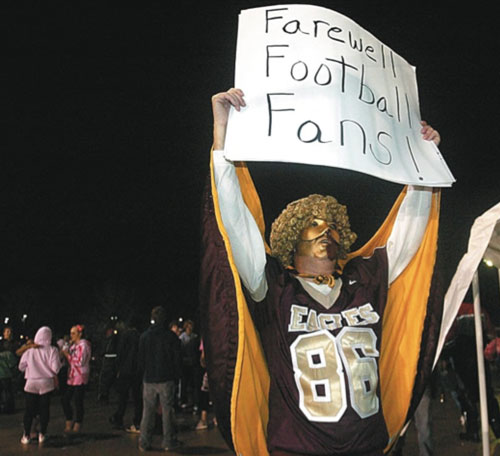 Mike Brown, senior pastor of Franklin UB church (New Albany, Ohio), has been named Grand Marshall of the 2010 New Albany Founders Day celebration, which starts with a parade on Saturday, May 15. He was nominated multiple times.

It started with a dare. If his youth brought 100 students to “Fifth Quarter” activities at the church after a high school football game, he would dress in a fan costume for the next game. They did, and he did. And it turned into a regular gig, showing up at games wearing a New Albany football jersey, a maroon and gold cape, and a gold wig.

Superfan’s signature moves were holding up handcrafted signs with funny and sometimes controversial messages. He also threw gum into the crowd. Visitors didn’t always appreciate Superfan. At a home game in 2007, visitors threw gum back at him. At a playoff game in 2004, an opposing fan shoved Superfan and followed him back to the New Albany sideline; Mike had to get a policeman involved.

For the role, he adopted an alter ego, and tried to keep his true identity a secret–though he did preach once as Superfan.

“I had two herniated disks,” Brown explained. “I just can’t jump the two or three steps without it hurting. If I can’t do it at 100 percent, then I don’t want to do it.”

He also suffered bouts of heart arrhythmia. Two days after participating as Superfan in a July 4 parade, doctors had to shock his heart back into normal pace.

“I hoped it would be fun that one time, and it became more fun than I ever dreamed of,” Mike said upon retiring Superfan in 2009.

“Honestly, my first reaction was shock,” Brown said. “It was really hard to believe. In all my years here, it is no doubt my biggest surprise….For years, I was not able to attend the parade due to middle school soccer tournaments on Founders Day. I guess this year I won’t miss the parade.”

11 May Bob Kaehr Retiring After 34 Years at HU

Bob Kaehr, director of library services at Huntington University, will retire May 31 after 34 years at the college.

Kaehr was instrumental in moving the library from the Loew Alumni Library (currently the Administrative Annex) to the RichLyn Library in 1986. He worked to keep the library up-to-date with the latest resources and technologies during his tenure. He also taught many of the classes for the library science minor, which is no longer offered on campus; nearly all of his students were placed into library positions after graduation.

In retirement, Kaehr plans to do some part-time lecturing and work in the university’s United Brethren Historical Center. But most of all, he plans to keep busy with meaningful activities, spend time with his wife, do volunteer work and, as he says, “enjoy life.”

10 May Amos Rawley Named Forester of the Year 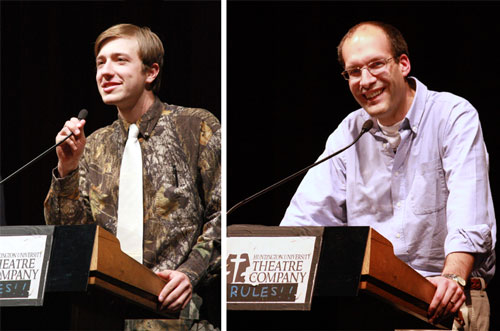 Huntington University’s annual Forester Night recognizes students and professors for accomplishments during the school year. The 39th edition was held May 4.

Twenty-one seniors were honored by their respective departments with the Outstanding Senior Awards, which are voted on by faculty. Amos Rawley received the award for Bible and Religious Studies. You can view that entire list online.

Dr. Tim Smith, assistant professor of history, was named the 2010 Professor of the Year. Smith joined the faculty in 2007, having previously taught at the University of East Anglia in the United Kingdom. He is the author of “Britain and the Origins of the Vietnam War 1943-50” (2007), and he has also published a number of articles in leading journals and for the BBC.

This year senior pastors were given the option, in place of regular cluster meetings, of taking training through the Center for Excellence in Congregational Leadership. This is a demanding two-year program.

A group of five UB pastors will begin the training today. They are now on their way to Green Lakes, Wiss., for the first of five classes they will attend over the next two years. The sessions begin tonight (May 10) and continue all week on the subject “Personal and Pastoral Integrity: The Key to Sustaining Pastoral Excellence.”

The five pastors are:

A Sunday school class of mostly senior citizens from King Street Church (Chambersburg, Pa.) was headed to Lancaster County on April 27 for a dinner theater. As their charter bus drove down I-81 on that Tuesday morning, a back tire blew. The driver couldn’t pull over, because the road had no shoulder, so he continued driving a half mile to an off-ramp.

When the driver checked on the tire, he saw smoke and flames. He then asked everyone to leave the bus. All 46 persons got off the bus safely before it filled with black smoke. Fire ultimately destroyed the interior of the bus. Fortunately, nobody was injured.

The passengers were bussed to the Newville fire station, where another bus from the charter company came to get them. They made it to the dinner theater on time.

Huntington University will award 279 degrees to students during the May 15 Commencement exercises, scheduled for 3 p.m. in the Merillat Complex for Physical Education and Recreation. Those degrees include:

In addition, honorary doctorates will be awarded to two persons: commencement speaker Dr. Herma B. Williams, and Donald Duff.

Martha Smith, Huntington University associate dean of students, will present the baccalaureate sermon at 10:30 a.m. in the Field House of the Merillat Complex.

The commencement exercises and the baccalaureate sermon are open to the public, and no tickets are required. 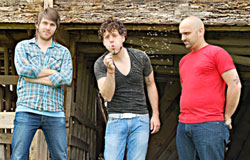 The April 18 concert in Grand Rapids, Mich., brought in 750 pounds of food for the needy. All items were donated to Byron Community Ministries’ food and clothing pantry in Byron Center, Mich.

Attaboy was joined by special guests Highland Fall and Jared Mahone. Other consponsors of the event were Banner of Christ UB church in Byron Center, JQ99 Radio, and Cornerstone Church in Caledonia, Mich.

Byron Community Ministries is an outreach program of 22 local churches. Byron supplies food and clothing to 1000 adults and children each month.

Attaboy’s lead singer, Amos Caley, is the son of Rev. J. Michael Caley, pastor of Banner of Christ church. The other two group members are Jeff Edgel, who was a fellow student with Amos at Huntington University; and Huntington native Chris Brumbaugh. The group has been together for five years.

Jess and Fay Baker, from First UB church in Holly Hill, Fla., experienced a great tragedy some years ago: their adult daughter was murdered by her ex-husband.

Vicki McKeown from First UB writes, “After the years their son-in-law spent in jail, he asked for their forgiveness and they gave it. God is doing miraculous things in their lives. The father and son-in-law have even served together on a ‘Kairos’ team (the ‘Walk to Emmaus’ for inmates).”

Their story of forgiveness will air Thursday, May 6, on Pat Robertson’s 700 Club. This will be a powerful message to be shared. The segment lasts about six minutes. Check your local listings to see when the 700 Club airs.

On May 3, Gary Gates (right), pastor of South Scipio UB church (Harlan, Ind.), began serving one day a week as the denominational Director of Ministerial Licenses.

Previously, most UB ministers were educated through Huntington University. The university then dealt with courses to take, transcripts, and everything else needed to keep the person on track for their licensing and ordination requirements.

Since Huntington University is discontinuing the pastoral track of the graduate program this summer, a lot of responsibility will fall back to the denomination.

The Pastoral Ministry Leadership Team revised the licensing and ordination requirements to include a list of up to 25 core courses, which ministers can obtain from various places. The Director of Ministerial Licenses will monitor and give direction to UB men and women as they work toward licensing.

Gary’s responsibilities will include:

Gary will spend Mondays in the Healthy Ministry Resources office. He can be contacted in these ways: