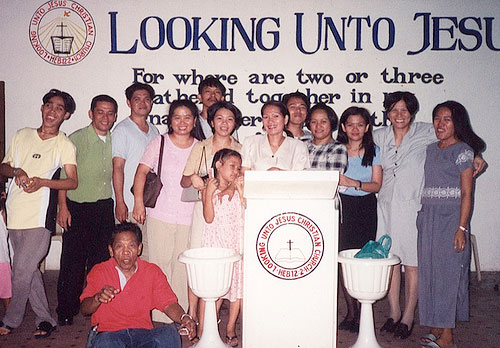 Members of the Philippine National Conference, known there as the Looking Unto Jesus Church.

Rev. Prudencio Lim (right, with his late wife, Restituta), superintendent of the Philippine National Conference, wasn’t able to attend General Conference in June. He had a stroke last September, so his son Aaron planned to accompany him. However, the US wouldn’t grant Aaron a transit visa so he could fly through an American airport on his way to Honduras. Rev. Lim, having traveled to the US before, had all the clearances he needed. But without his son to accompany him, he cancelled the trip.

However, Rev. Lim did send a report on the work in the Philippines during the past four years (they became a UB national conference in 2005). Here are some notes from it.

The report concludes: “2010 is another year of challenge in reaching Filipino people for our Lord Jesus Christ. This will be another year of soul-winning and equipping of the saints of God, and the passing of the anointing to our new breed of leaders. We envision raising effective servant leaders that God will raise in these last days.”