Huntington University won an agriculture contest. Actually, it was a public relations contest, but it involved agriculture–a marketing/PR campaign to promote agriculture to young-adult Hoosiers (ages 18-35).

HU’s team, named “Hoosier Grown,” was among 30 teams from 17 Indiana colleges that submitted entries in the contest. The 30 teams were winnowed down to three finalists, who made presentations at the Statehouse.

And Huntington won with their proposal, which includes a new brand image, an integrated social-media marketing plan, and an increase in awareness of the agriculture economy and opportunities. The two runners-up were the University of Indianapolis and the University of Southern Indiana.

They won money, too. Lt. Governor Sue Ellspermann presented a $25,000 check to the team–$10,000 for Huntington University, the rest to be divided among the seven student team members–four seniors, one junior, and two sophomores.

Dr. Ann McPherren (right) led the HU team, which included a mix of majors–public relations, film production, business administration and marketing, graphic design, animation, and biology pre-med. Some of the team members grew up on or currently work on farms and were members of 4-H or active in the FFA. One team member serves as his county’s membership chairman for the Indiana Farm Bureau.

Five incoming Huntington University freshmen have been awarded the Horizon Leadership Scholarship for the 2014-2015 academic year.

A collaboration between Huntington University and Youth for Christ, the Horizon Leadership Scholarship was begun in 2008 to attract and retain students of diverse racial and ethnic backgrounds. The scholarship covers the recipient’s tuition and room-and-board for up to 10 semesters. This is made possible through a blend of federal, state, and institutional aid. Recipients are required to achieve and uphold a standard of academic performance, community service, and spiritual and social growth. 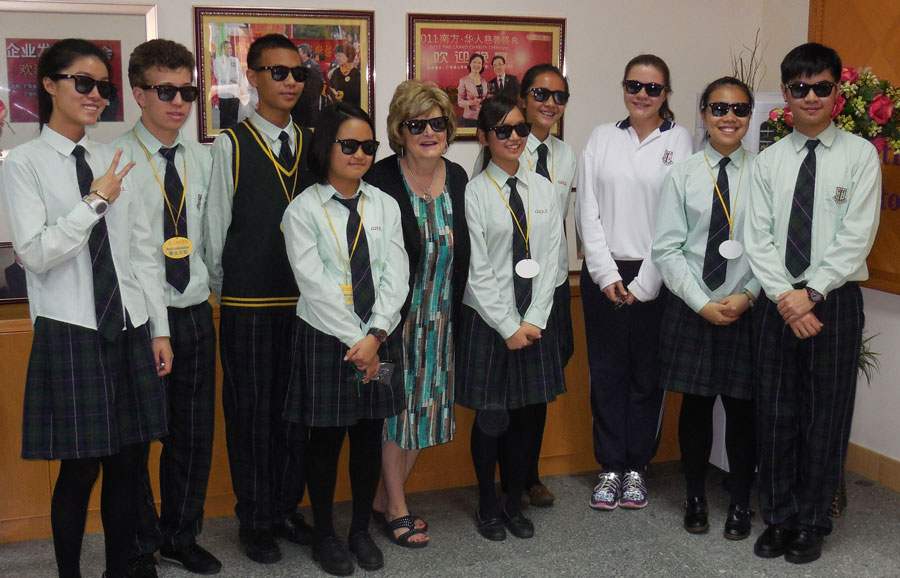 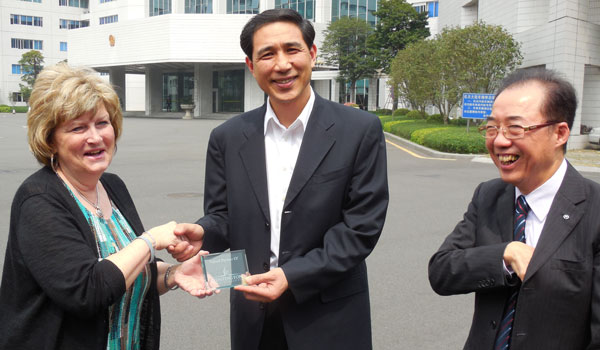 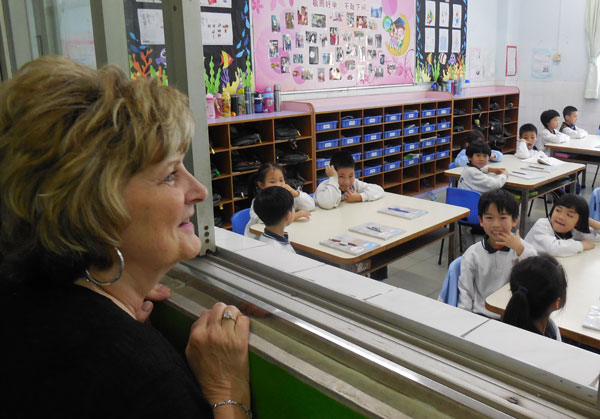 Dr. Sherilyn Emberton, president of Huntington University, was in Hong Kong on Wednesday meeting with people from the China Hong Kong English School. Here are a few photos. 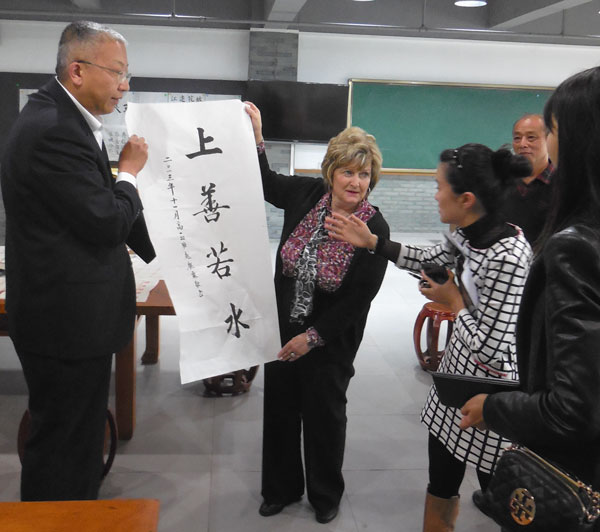 Dr. Emberton and her fellow travelers from Huntington University, Dr. Luke Fetters Shoshannah McKinney, are spending spring break in China meeting with educators about possible partnerships with HU. A previous article told more about that. 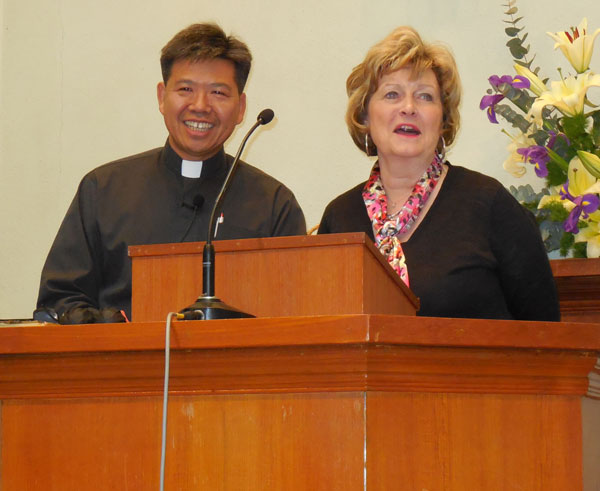 Dr. Sherilyn Emberton brings greetings to the Zion UB church in Hong Kong. Translating for her is the church’s pastor, Rev. Carol Can Yu Kwong, who is also an HU alum. 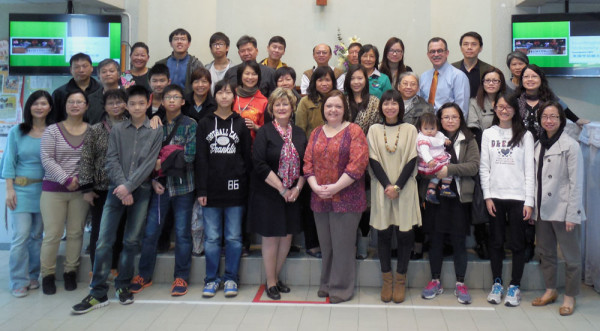 Dr. Sherilyn Emberton, president of Huntington University, is getting acquainted with the United Brethren of Hong Kong Conference. On Sunday, March 16, she shared greetings from the University with Zion Church. The pastor of Zion is Rev. Carol Chan Yu Kwong, an alumnus of the Huntington University graduate school.

After the service, Shoshannah McKinney shared a presentation about Huntington University with the youth of the church. McKinney is associate director of the HU Institute for TESOL Studies and international student admissions coordinator.

Dr. Emberton is spending spring break in China with McKinney and Dr. Luke Fetters, professor of ministry and missions. They arrived in Hong Kong on Saturday evening, March 15. They will spend a week meeting with Chinese educators about possible partnerships with Huntington University. A previous article told more about that.

14 Mar God, Baseball, and the Beach in Nicaragua

The Huntington University ministry team and their Nicaraguan friends.

Baseball is the national sport in Nicaragua. Soccer reigns in most Latin American countries, but baseball is king in Nicaragua. And in Panama, Cuba, and the Dominican Republic, for that matter. But this is about Nicaragua.

One day last September, two United Brethren ministers showed up after a Huntington University baseball practice. Are you interested in spending January Term in Nicaragua? they asked. Playing baseball against Nicaragua teams and holding clinics for children?

Austin Clem, a freshman from Walton, Ind., population 1200, felt apprehensive about the idea. He had never traveled out of the country, except for a cruise, which hardly counts. He knew Nicaragua had experienced turmoil in the past.

“It was out of my comfort zone, not in the American culture I knew and loved,” Austin said. “But I felt I needed to go, that I belonged there.”

It helped that a bunch of his teammates also signed up. Twelve of them, in fact, seven of them freshmen. They were joined by five soccer players—four current players, and one recent graduate, Isaac Beal. Plus those two ministers, both of whom participated on a previous baseball trip in 2012.

Jeff Dice is associate pastor of Brown Corners UB church in Clare, Mich., and also spends a chunk of each year in Nicaragua coordinating mission trips, among other things. He and his wife, April, are “non-traditional” staff with Global Ministries.

Josh Kesler is founding pastor of The Well, one of the three UB churches in Huntington. He’s also an assistant coach with the Huntington University soccer team. Josh did most of the legwork in getting guys signed up for the trip.

There was no hesitation from Dustin Rutledge, a catcher. He went in 2012—the only current student to return.

Dustin grew up in Frankfurt, Ind., in a very religious family. However, his parents separated when he was young, and the family strayed from the church for about five years. But toward the end of his high school years, they reconnected with church.

“When I was younger, I didn’t really understand everything about my faith,” Dustin said. “But when we returned to church, I was getting it figured out. I think God wanted me to come to Huntington to expand on it and become a follower of him.

“I proclaimed my faith the first time we went to Nicaragua. Shortly after returning, I was baptized by Josh at The Well, along with other athletes. I’ve stayed connected with God, and have continued to grow and build my relationship with him.”

END_OF_DOCUMENT_TOKEN_TO_BE_REPLACED

On Friday, March 14, three persons from Huntington University will travel to China during Spring Break, wanting to seek possible partnerships with various school. They are:

“We are going to talk with them about the possibilities of us establishing a stronger relationship,” Emberton said, “which may be recruiting some of the students to come here.”

This will be Dr. Emberton’s first visit to China. The group will spend a week mostly in China’s southern cities, where they will talk to leaders from middle schools, universities, and institutions. The schedule includes middle schools in Zuhai and Doumen, a private prep school called Global EILTS, United International College, and Jilin University.

In Doumen No.1 middle school, they will be talking about HU’s international program for students and the Master of Education program for teachers. Meanwhile, they will explore the possibility of giving teachers more training and more education by providing various programs such as a TESOL (Teaching of English to Speakers of Other Languages) certification program.

In Zhuhai No.1 middle school, they are seeking a partnership for this summer. Students will possibly have an English summer camp locally which opens a door for them to come to Huntington in the future.

Private institutions like Global IELTS have also showed interest in doing a summer camp on HU’s campus and sending students to HU in the future.

In addition, HU will talk about starting an exchange student program with universities like UIC and Jilin University’s Zhuhai campus.

Next fall, Huntington University will begin offering a major and minor in criminal justice. Many of the needed courses were already offered in the psychology, sociology, and social work programs. “It was a matter of packaging them the right way and adding two or three others,” said Dr. Del Doughty, interim vice president of academic affairs.

“Criminal justice is a field that potential students often inquire about, so we will be able to attract more of those students who otherwise might go elsewhere to find the major,” said Dr. Mary Ruthi (right), professor of sociology. “It will provide another option for current students who are undecided or thinking about changing their majors.” 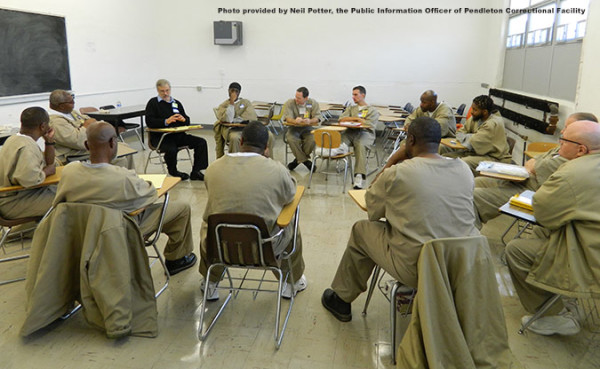 Dr. Jack Heller leading a discussion of Shakespeare with inmates at Pendleton prison.

After volunteering with Shakespeare Behind Bars for seven years and conducting four different summer seminars with their program, Dr. Jack Heller (right) decided it was time to pursue his own prison program in Indiana. Heller is assistant professor of English at Huntington University.

This fall, Heller began a program to guide inmates through the study and performance of Shakespeare at Pendleton, a maximum-security prison near Indianapolis that has over 1800 inmates.

The program seeks to increase the cultural opportunities of the inmates while using Shakespeare to help them re-examine their lives.

Currently, the inmates are working on “Coriolanus,” the last tragedy written by Shakespeare with anger as the central theme. Because this program is so new, the men are currently approaching the play as a readers group. They will eventually work toward a performance of some kind.

“I would like for the men to wrestle with what roles they are assuming,” he said, explaining that many times when an inmate chooses a character, he can become conflicted because it will resonate with his past life.

Heller said that he would like to take groups of Huntington University students to Pendleton like he did with the Shakespeare Behind Bars program.

“You realize the purpose for visiting the prisoner is what we can do for them,” Heller said. “And that’s important, but it’s also about what we can learn about ourselves, and that can be our motivation to keep involved in the inmates’ lives.”

The Huntington University Foundation has thus far raised over $165,000 for scholarships, far exceeding the goal of raising $75,000 during its 75th anniversary.