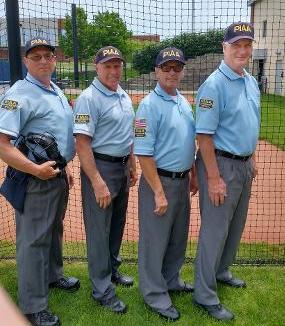 Greg Helman (second from right) with the umpiring crew.

Rev. Greg Helman, pastor of Blue Rock UB church (Waynesboro, Pa.), helped umpire the Pennsylvania State Champion softball game at Penn State University in June. He and his crew from Franklin County, Pa., were chose to umpire the AAA final at Beard Field. He was the second base umpire.

He writes: “One close play at second involved a runner returning to the base after the left fielder ran down a fly ball. She threw it to the shortstop, who hesitated and then threw it to second. My call was safe as the runner’s fingers touched the base as she slid head first before the ball was caught. This call was appealed and we gathered together to determine the situation. Ultimately, the call was safe. The fans for the defense weren’t happy. However, I later watched the play on my tv and the announcer stated, ‘Blue got it right!'”

Greg’s wife, Marty, and daughter Greta surprised him by attending the game, which was televised on the Pennsylvania Cable Network.