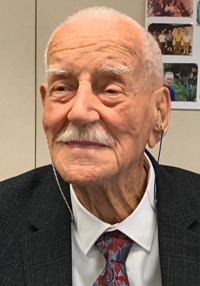 Charles Edward Snider passed away June 12, 2020, in Toronto, Ontario. He was 100 years old. He is somewhat of a legendary figure among United Brethren in Canada, particularly in the area of missions.

Charlie, as he was known to everyone, served in the Royal Canadian Air Force during World War 2, working as groundcrew in Northern Ireland, Scotland, and Wales. In 1972, he started “Maintenance for Missions,” and traveled around the world to build and fix things for various mission organizations. He initiated and supervised numerous work teams through the United Brethren Church to build churches, schools, and small water projects. He fixed lawn mowers, generators, and hospital equipment. He installed water systems in Sierra Leone, installed and fixed hospital equipment in Angola and Kenya, drilled wells to provide clean water in Ethiopia, rebuilt/installed hydro-electric generators in Ecuador and Kenya…and much more.

Charlie’s wife, Rev. Ruth Snider, an ordained United Brethren minister, spent many years pastoring UB churches in Ontario. She also served as president of the Women’s Missionary Association and as a member of the denominational Board of Missions. She also worked as director of Food for the Hungry Canada. Their son Stan and his wife, Vicki, were missionaries at Mattru Hospital in Sierra Leone until the civil war started.

Because of Covid-19 restrictions, only immediate family will gather for a graveside service. You can read Charlie’s full obituary here.