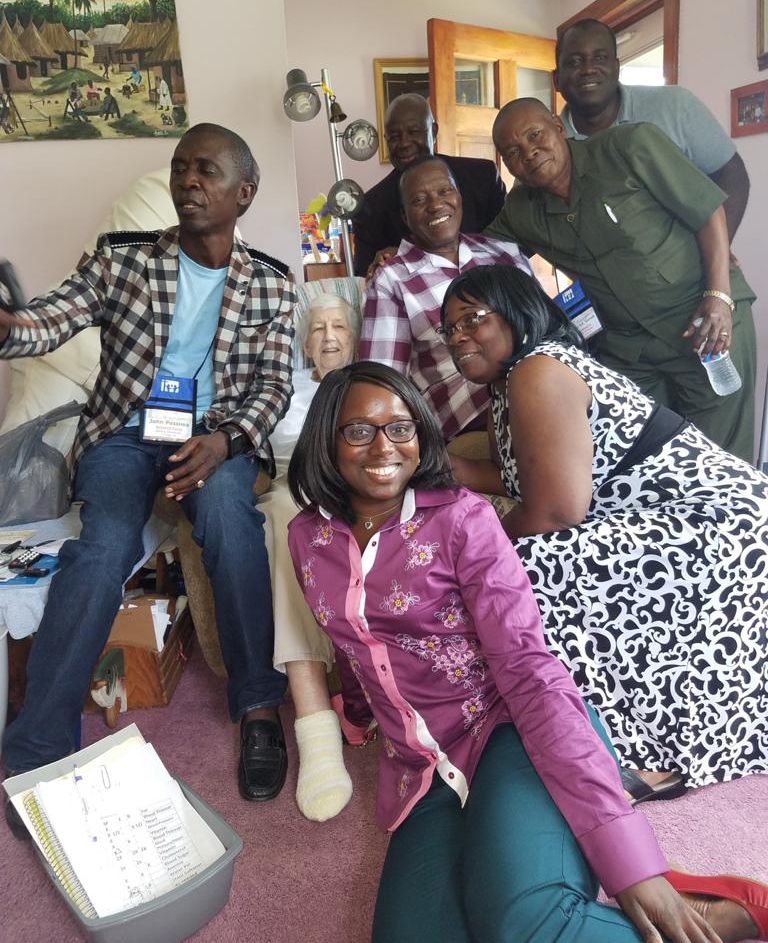 Admirers and former students gather at June Brown’s house in 2017.

Dr. Billy Simbo (right) is a native of Sierra Leone, an ordained United Brethren minister, and was the first Sierra Leonean to carry the title of “bishop.” This is written in memory of June Brown, a UB missionary who died on June 4, 2020.

I cannot remember the first time I met Miss June Brown in Sierra Leone. But we have had a relationship in ministry and friendship for over half a century. You will notice that my tribute is to Mama Brown. For those of us born and raised in Sierra Leone, that is a title of great respect. It is a tribute to June Brown that her students in Sierra Leone referred to her officially as “Miss Brown,” then she affectionately became “Mama Brown.”

Mama Brown was unique as a missionary. She went to great lengths to learn the Mende culture and went out of her way to help the people in the communities in which she served. I appreciated the times we would sit and talk, or she would consult me about cultural things so she would increase her understanding and effectiveness. She was well known for her hunting skills, and students and town people could count on her bringing home meat from her trips. Kids got to know goodies were coming when her faithful VW Bug came roaring down the road after each hunting trip.

Mama Brown was kind and respectful. When she first came to Sierra Leone, I was in my first year of Secondary School. As she watched me grow and become a minister of the Gospel, she encouraged me and made me feel like my opinions mattered. I remembered a conversation I had with her when I was asked to go back to Sierra Leone to become head of the Sierra Leone Conference of the Church of the United Brethren in Christ. She knew of the turmoil the denomination was going through, but she said to me, “Oh, Billy, they need someone like you right now!”

In my 50-plus years of ministry, I have met many missionaries, but few have left their mark on our nation like June Brown did. Even after she came home and retired from missionary work in Sierra Leone, her heart was still in Sierra Leone, and the people of Sierra Leone were never far from her heart and feelings.

My last memory of our getting together was when a whole group of us surprised her at her home just outside Chambersburg, Pa. We drove in a convoy of cars from Lancaster, where we had been attending conference. She greeted us all in Mende. There were pots of cooked Sierra Leonean dishes, joyous laughter and fellowship, and she kept saying, “Oh, my!” It was a pleasant surprise, and we all had a great time. It was as if we had all gone to see a friend, mentor, and relative we had not seen for some time.

Sierra Leone will miss Mama June Brown, but what she did for us will never be forgotten. We say thank you to her home church, King Street UB Church, and her family for sharing her with us. She leaves behind many spiritual children and grandchildren who would not be where they are today without Mama June Brown’s influence and investment. Now there is one more person to look forward to meeting on the other side!