31 Dec On This Day in UB History: December 31 (The Religious Telescope) 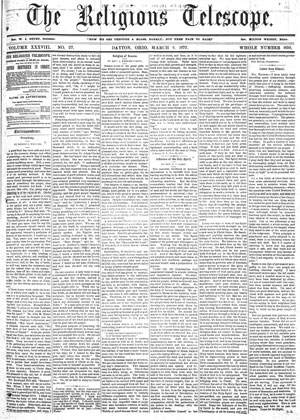 On December 31, 1834, the first issue of The Religious Telescope was published. It was four pages long, 15-by-22 inches in size. It began as a bi-monthly publication, and started with about 1200 subscribers who paid $1.50 per year. We now had a denominational publication.

John Lawrence, who would become editor in 1852, wrote, “The paper was a very respectable sheet, well edited, yet not popular because of the extreme views which it advocated. It entered largely into the controversies of the times and earnestly and boldly, though not always prudently, marched in the front ranks of every reform.”

Most of the original United Brethren spoke German, and the German language predominated in United Brethren circles into the 1830s. Only two members of the 1821 General Conference were English. Others could preach in English, but German was their mother tongue. The 1821 Discipline was printed in both languages—German on the left, English on the right. It was an acknowledgement of what was coming.

The Germans, because of their unselfish missionary zeal, pretty much worked themselves out of a denomination. They so generously supported and promoted outreach to English people that by the 1830s, we had become (or were becoming) a predominantly English-speaking church. Most of the church’s expansion into the west–Ohio, Indiana, and elsewhere–occurred among English-speaking people.

From the beginning, The Religious Telescope was published in English. However, because of protests from some German-speaking folks that scant attention was being given to the German constituency, we launched a German-language periodical called Die Geschaftige Martha (The Busy Martha). It started in 1840, but ceased after two years. English, even in Pennsylvania, was clearly the future.

The Religious Telescope continued until 1946, when the “liberal” UBs merged with the Evangelical Association, which had its own publication called The Evangelical Messenger. The new denomination, called the Evangelical United Brethren Church, merged the two periodicals under the very uncreative name The Telscope-Messenger.