23 Dec On This Day in UB History: December 23 (Managua Earthquake) 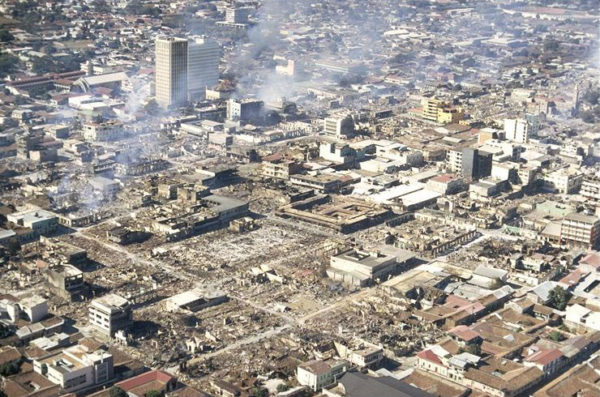 Managua after the 1972 earthquake

A 6.3 magnitude earthquake shattered Managua, Nicaragua, on December 23, 1972, killing 10,000 people and leaving 300,000 homeless. Communication with the United Brethren pastors and people in Nicaragua was lost. Honduras Conference had begun ministry in Nicaragua during the mid-1960s, and we had several churches there.

On January 5, Honduras missionary Archie Cameron contacted the Missions department in Huntington, Ind., reporting that our workers in Nicaragua had escaped personal harm, but that they had relatives, friends, and neighbors who had lost a great deal. The Missions department issued an emergency appeal for relief money, and within a few months, nearly $20,000 had been raised.

Cameron and fellow UB missionary Gary Brooks arrived in Managua on March 19, 1973. As they approached the city center, they saw hundreds of refugee tents and lines of people waiting for food and medical attention. Damaged buildings stood everywhere, with people busily repairing cracks in walls.

Then they arrived at the center of Managua. Going past a barbed wire fence, they drove block after block without finding a single building still standing. There were thousands of fallen homes and stores, and not a living soul in sight. Brooks wrote:

“The overwhelming silence inside the fence prevails. One finds himself searching for signs of life, knowing there is none to be found. Over 7000 people died here–some immediately, and others after days of suffering. We could still smell the stench of rotting bodies under one fallen building. It is said that the wrecking crews find an average of 40 bodies per day….The residential areas of the city are slowly stirring back to life, but not the center of the city. The heart of Managua stopped beating that warm December morning nearly four months ago, and the city died. This week, I saw its tomb.”

Nicaraguan dictator Anastasio Somoza Debayle named himself head of the National Emergency Committee, personally directing the international relief efforts. He used the position to plunder most of the relief money and supplies, and gave reconstruction contracts to family and friends. Such reports prompted baseball star Roberto Clemente to organize and personally accompany relief flights into Nicaragua. The fourth flight crashed, killing Clemente and others aboard.

Outrage against the Somoza regime’s actions after the earthquake gave substantial support to the opposition Sandinista rebels, who overthrew Somoza in 1979.