19 Dec On This Day in UB History: December 19 (John McNamar) 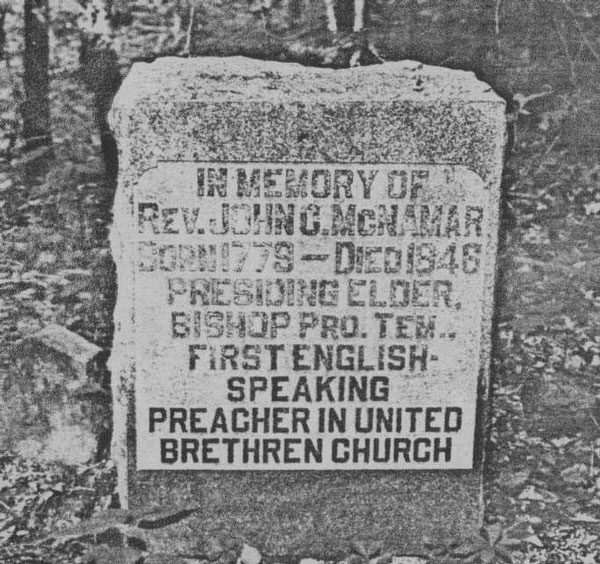 John McNamar was married December 19, 1805, in Xenia, Ohio. We can assume they said their vows in English, because McNamar is heralded as the first English-speaking United Brethren minister. Says so on his gravestone. All of the founders and early ministers spoke German. But in the early 1800s, most of the church’s westward expansion occurred among English-speaking people, and McNamar was in the forefront.

McNamar was born in Virginia in 1779, of Scottish-Irish descent. It’s not know when exactly he moved to Ohio. However, in 1811 he became a schoolteacher in Germantown, Ohio, where future bishop Andrew Zeller lived. He became a Christian during an evangelistic meeting in Zeller’s barn, and Zeller shepherded im toward the ministry. In 1814 he became a minister in Miami Conference (the Miami Valley of southwestern Ohio) and was ordained in 1816. 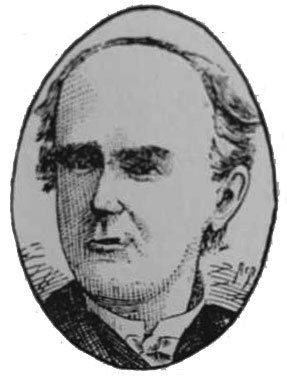 John Lawrence wrote, “He devoted himself to the Master’s work with a singleness of aim, and resoluteness of purpose, which have seldom been equaled. He planted the larger part of the early English United Brethren churches in southwestern Ohio and southern Indiana.” He was also successful in recruiting new ministers. By 1820, another eight English-speaking ministers had joined Miami Conference and were doing their own part in spreading the Gospel.

McNamar is described as brave, unpretentious, practical. He spoke slowly and distinctly, and used a lot of humor. He zealously expounded on and defended the fundamental Christian doctrines, like the divinity of Christ, which he often preached to “immense congregations at camp-meetings.” He was a strong theologian and could wax eloquent. But, “His object was to save men; and he had the happy faculty of following up a clear exposition and masterly defense of some great truth with a heart-searching application.”

William Weekley wrote, “Mr. McNamar had the evangelistic spirit to an intense degree, and the spread of the Redeemer’s kingdom was to him paramount to all things else. He had the zeal of the early disciples, and, regardless of the cost to himself, went everywhere in his large frontier parish preaching the gospel of the kingdom. He was a man of superb courage. To him even roads and paths seemed useless. If his horse could not carry him, he led the horse, or, leaving him behind, went on foot. He frequently slept in the wilderness, but he was never lost. His long journeys were often made extremely difficult by untoward condition of the roads and by overflowing creeks and rivers.”

Despite having to travel long distances over rough terrain, he was known for punctuality. Fellow minister George Bonebrake testified, “When the time arrived for him to start to an appointment, he was off. He would wait for no one, and listened to no excuses. Rain, snow, mud, swollen streams, and floating causeways–any of these, of all of them combined, could not change his purpose. Nothing but a physical impossibility would detain him from an appointment.”

Weekley said multitudes of people flocked to hear McNamar preach. “He was unsurpassed in his qualities to capture new communities. There must have been peculiar power in his preaching and a peculiar adaptability to the hearts and to the spiritual needs of the people.”

By all accounts, McNamar was a gifted, natural leader. He became highly respect in the denomination and helped shape important legislation. He was elected bishop in 1833 to succeed Christian Newcomer (who had died during his final term in office), but he declined for unknown reasons. However, he seemed to prefer working in the trenches. Henry Spayth wrote, “J.C. McNamar, a true son of the gospel, determined to march in the front ranks of the ministerial army. He chose the frontier country for his field of gospel labor. To forego all sorts of comfort, to range the forest, to carry the gospel to the newly-arrived inhabitants, to seek the lost and scattered of Israel, was his employment, no matter how poor or destitute they or himself were.”

McNamar toiled faithfully for over 30 years. He passed away in 1846.