06 Dec On This Day in UB History: December 6 (Shirley Fretz) 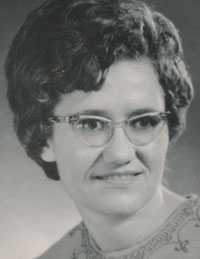 During her furlough in 1983, Shirley Fretz (right) had a difficult decision to make. Her father had been hospitalized with cancer almost continuously since July 1982. Should she stay home and await his death, or return to Sierra Leone in December as scheduled?

Shirley later recalled, “My dad was very alert right up to the end. He knew exactly what was going on, and I’m sure that if I had visited him the day I was supposed to leave for Africa, he’d have said, ‘What happened? Why didn’t you go?’ I knew he would be gone soon, and it would be good for me to be there, but you can’t just stay home and wait for something to happen.”

She left at the end of November and arrived in Bumpe on December 6, 1983. The next day she received a telegram saying her father had passed away on December 6.

Bishop Jerry Datema was in Sierra Leone at the time for annual conference. He led a memorial service at the Bumpe church the same day as the memorial service back in Canada. The church was full of people—they didn’t know Shirley’s father, but they knew Shirley. The Bumpe primary children sang a couple of his favorite songs, and then Bishop Datema preached.

Shirley said, “It was almost like being home for the funeral.”