30 Nov On This Day in UB History: November 30 (Martin Boehm) 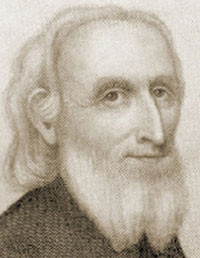 Martin Boehm was born on November 30, 1725, the youngest child in the family.

His father, Jacob, had come to America ten years before, in 1715, emigrating from Holland. Jacob settled in Lancaster, Pa. He bought a 381-acre farm, built a house, and became the area’s first blacksmith. He also married a Mennonite girl named Barbara Kendig, who sometimes worked alongside him in the blacksmith shop.

Martin grew up embracing the Mennonite doctrines and practicing their ways. As an adult, he proved to be a successful farmer in his own right. He started with 181 acres from his father’s farm and kept buying additional land, ultimately ending up with 400 acres. At age 28, he married 19-year-old Eve Steiner, and they had eight children.

It was in 1756, when Martin was 31 years old (some accounts set the year at 1758), that he was chosen by lot to be a Mennonite minister. That set in motion events which led to his own conversion, his becoming an evangelist, and eventually, a Great Meeting in 1767 during which he met a German Reformed minister named William Otterbein. Thirty-three years later, Boehm and Otterbein would become the first two bishops of the Church of the United Brethren in Christ.