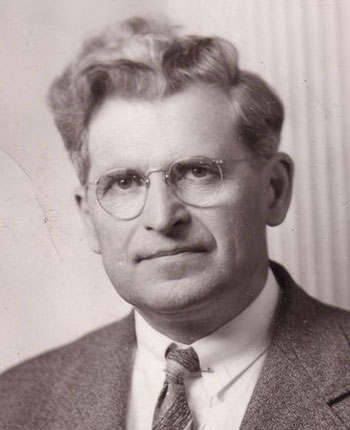 Bishop Lloyd Eby (right) passed away on November 27, 1969. He had lived a full life–missionary in Sierra Leone, pastor, planter of many churches, and bishop for eight years (1949-1957).

After leaving the bishopric, Lloyd and Eula Eby went back to Sierra Leone for one more term (their third). Then, in 1962, they settled down to retirement in Fort Wayne, Ind., and faithfully attended Third Street (now Anchor) United Brethren Church. During this twilight years, he focused on prayer. Tim Hallman wrote about it in the chapter on Lloyd Eby in “United Brethren Bishops, Volume 2.”

Eby regularly prayed for over 500 missionaries and staff personnel around the world. He kept a notebook with a page for each of “his” missionaries–photo, country, description, needs, etc. Maps and calendars supplemented his praying, along with at least 50 mission publications which kept him updated on the broader world of missions.

Eby divided his prayer list into sections, and covered some of it each day. He said he would kneel until he got tired, then would get up and walk around or stand and pray.

Eula Eby kept her own missions prayer list. They received at least 25 letters a week from missionaries. They also sent out a newsletter titled, “Intercessory Fellowship for Missionaries,” and opened their home to missionaries passing through Fort Wayne.

Bishop Clarence Carlson said of Eby: “I know of no other person who prays as fervently and persistently as he does. Most of his time throughout the day is spent in prayer.”