17 Nov On This Day in UB History: November 17 (Michael Long) 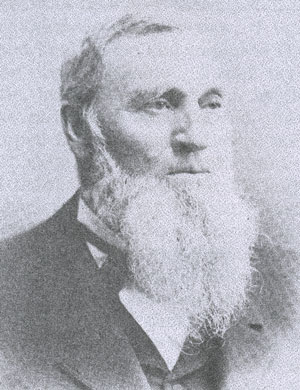 Rev. Michael Long passed away on November 17, 1891, at age 77. He is considered one of the greatest soul-winners in the history of the United Brethren church, and is credited with being instrumental in the salvation of over 5000 people. Historian William Weekley wrote, “He lived for it, prayed for it, and put all else aside for it….It may fairly be questioned whether any one minister in the history of the denomination, [Christian] Newcomer excepted, has made a greater record as a soul-winner.”

Michael Long was born May 3, 1814, in eastern Ohio. He became a Christian, and a UB, at a young age. He was licensed to preach in 1836 by Sandusky Conference (northern Ohio) and was assigned to a circuit of churches—28 appointments which took 400 miles to cover (including nine crossings of the Auglaize River). He preached at each place once a month. At the time, there were no church buildings in the entire conference. Services were held in homes, barns, groves, and other places.

Long spent his entire ministry, nearly 60 years, in the Great Black Swamp of northwestern Ohio. The Black Swamp was tough on preachers. There were few roads and bridges, and many ways to get sick. Where horses couldn’t travel, preachers had to trudge through the swamp on foot.

Long was described as having a strong, “impressive” physique. His mighty voice was perfect for campmeetings, and he was a gifted singer, too. He was personable, cordial, with a “sunny disposition and a merry humor.”It was said that Long once preached three times a day for 30 days straight. He attended Sandusky Conference 56 years in a row, and never missed the opening prayer.

Long was a demonstrative speaker, and an extraordinary evangelist. His preaching, noted Weekley, “had that quality that broke down stubborn wills, melted the hardest hearts, and caused multitudes to repent of their sins and to accept Christ as Lord and Savior.”

Said one person who knew Long, “Entire communities were transformed by his noble Christian influence and the marvelous power of his ministry.”

William Weekley said many of the early United Brethren preachers were focused on evangelism, and neglected discipleship. Consequently, churches of other denominations picked up our new converts and trained them in Christian living. But Long was both an evangelist and an organizer. “The fruits of his great evangelistic campaigns were largely conserved to the denomination. This was the exception in those earlier days.”

In May 1864, Long traveled to Fort Ethan Allen in Virginia, where many soldiers from northern Ohio were stationed. He preached to them from 1 Chronicles 4:10, the Prayer of Jabez, which was quite appropriate: “Oh, that you would bless me and enlarge my territory! Let your hand be with me, and keep me from harm so that I will be free from pain.”

Long and his wife Sarah were married in 1837 and had five children. All three sons became ministers. Sarah, three years younger than him, preceded him in death by two years.

Long was a close personal friend, and one-time neighbor, of President Rutherford B. Hayes (they were both buried in Fremont, Ohio). When Hayes learned of Long’s death, he said, “In the history of northwestern Ohio, the name of the Rev. Michael Long can never be disassociated from the very highest rank of moral and religious leadership. Nothing my friends might say of me when I am gone will be more truthful and honorable than what I can say of my friend Long—he was a devoted and successful minister of the Gospel.”