22 Oct On This Day in UB History: October 22 (Zebedee Warner) 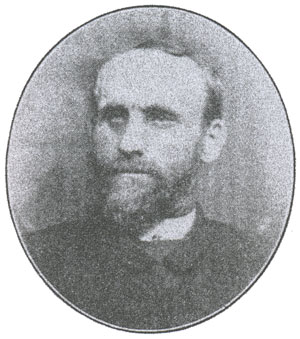 On October 22, 1853, a 20-year-old Virginian named Zebedee Warner was granted a United Brethren preaching license. A man of strong intellect, Warner had considered careers in medicine and law before recognizing that God had an even higher calling for him–the ministry.

It was considered perhaps the most rugged territory in the denomination, with rugged mountains, thick forests, and bridgeless streams. One time, after Warner rode toward his log cabin after what was described as “an unusually long absense,” his three children came running to meet him. A kick from Warner’s horse struck the youngest daughter on the head, killing her instantly.

Warner was considered a great speaker who invested himself in recruiting and training young ministers. He was an eloquent and formidable debater, but according to biographer William Weekley, “In the treatment of his opponents, he always manifested a Christian spirit. In this he was an exception.”

Warner also despised alcohol; in 1882, he canvassed the entire state and organized temperance forces in every county.

Warner was a General Conference delegates from 1861-1885, and was influential in moderating the stand against secret societies (which helped lead toward the division of 1889). Warner was also a trustee of Otterbein University, and in 1878 was awarded a Doctor of Divinity degree.

In 1887, Warner accepted a pastorate in Nebraska. He died there a year later.