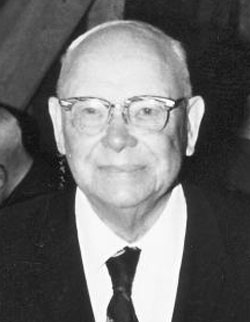 Dr. George Fleming was the Mission director when Jamaica Conference was founded in 1944. In 1947, the work expanded beyond Kingston to the city of Mandeville, 60 miles away. In 1951, a new church was dedicated outside of Mandeville in the ara known as Battersea. It was christened Fleming Memorial Church.

The church was torn down in 1979 to make room for a new road, but the government promised to build a new church–and they did. The new Fleming Memorial Church was dedicated on October 18, 1981, by Jerry Datema during his first visit to the island as bishop.

Datema wrote, “When I returned and told Fleming how beautiful it was, I knew he wouldn’t be content until he had seen his beloved church.”

In 1982, Dr. Fleming made a three-week trip to Jamaica, during which he visited a dozen churches, including the church named in his honor. Though 93 years old, he was in good health and preached 13 times.

Dr. Fleming passed away a year later. We’ll talk about his life in ten days.