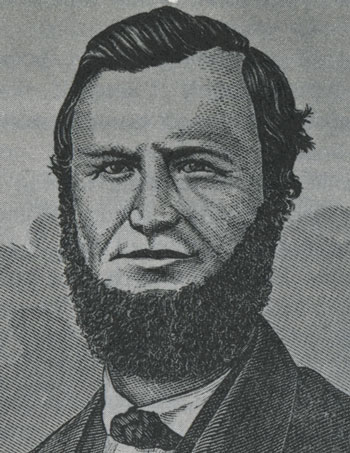 The Bright family, with connections to British statesmen and church leaders, emigrated to America in the mid-1700s. One Bright family settled in central Ohio (which became a state in 1803). There, J. C. (John Collins) Bright was born on October 13, 1818. He would become a pioneer in United Brethren missions. He could even be considered the Father of UB Missions.

Bright became a United Brethren minister in 1841, at age 23. He continued as an itinerant preacher for 12 years, holding revivals and organizing new churches.

In 1852, Bright chaired a committee for Sandusky Conference which focused on world evangelization. The conference adopted this resolution:

“The time has fully come when the United Brethren Church should unite her whole strength in a missionary society which shall include not only the home, but the frontier and foreign fields.”

This action prompted the 1853 General Conference to create the Home, Frontier, and Foreign Missionary Society. Bright served the next four years as General Secretary of this new organization–basically, as our first Missions director. He wrote that they intended to stir up “young men and women to consecrate themselves to missionary work” in a task which he described as “the conquest of the whole world for the Redeemer.”

Bright’s impassioned writing and eloquent speaking moved people to come alongside in taking the Gospel not only to the Wild Wild West, but to other countries. During those four years, missions were started in a number of states and territories–Nebraska, Minnesota, Missouri, Kansas, Oregon, Tennessee–as well as in Canada and in Sierra Leone.

But after four years of pushing himself relentlessly, Bright suffered a nervous breakdown. After recovering his health in a Cleveland sanitarium and spending some time in secular work, he finally returned to ministry in 1865. Bright became pastor of a struggling, 25-member UB church in Galion, Ohio. He would spend hours each day in prayer, asking God to bless the work. In December 1865, he began a series of meetings which continued into February, and which saw 200 people become Christians and 160 of them join the church.

Bright proved to be a pioneer in another area: church music. At the time, many United Brethren staunchly opposed using instruments and choirs in church. But Bright, noting that people liked music, bought an organ for the church and organized a choir. William Weekley says this was the first United Brethren church in the denomination to use instruments during church services.

Weekley wrote, “Mr. Bright was a prophet. Some thought him to be a dreamer, but his dreams were simply visions of the things which, in the course of years, became realities….Few men of the Church have performed a more lasting and greater work than he.”

In March 1866, Bright suffered a second nervous breakdown. His health plummeted, and he passed away on August 6.