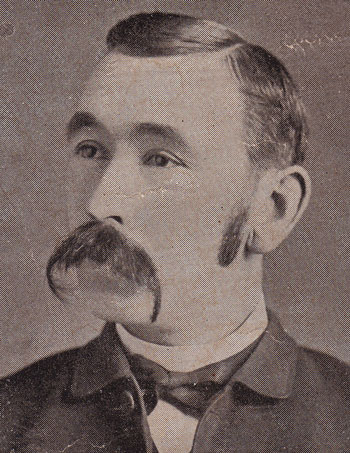 On October 10, 1924, Bishop Corydon Wood passed away…in Jackson State Prison, where he had been incarcerated for over a year. It’s a sad story.

Corydon L. Wood was one of the three new bishops elected in 1905. He had been a United Brethren minister in Michigan since 1878, and was among the 14 delegates to the 1889 General Conference who walked out with Milton Wright.

In United Brethren Bishops from 1889-1997, Kevin Cherry described Wood as a “paradoxical bishop.” He was gifted in many ways — preacher, writer, parliamentarian — and became a strong advocate for many causes: pastors’ salaries, missions, Huntington College, evangelistic meetings. Bishop Clyde Meadow recalled the support and generosity he received from Wood as a ministerial student.

But Bishop Wood wrestled with some inner demons.

While presiding at White River Annual Conference (Indiana) in 1920, Bishop Wood was asked to leave the conference immediately. He had been accused of immoral acts involving young boys. He went to the house where he was staying and found his packed bags sitting on the porch. The next month, Wood’s home conference, North Michigan, suspended him for a year. Conference records said he had “confessed his faults along the line of complaints made” and had asked forgiveness. The word “faults,” of course, is a serious understatement.

Today, it seems incredible that the Church would deal internally with this criminal offense But that was a different time in American society.

In 1923, Corydon Wood was arrested for molesting boys in a park and given a sentence of up to five years for crimes against five boys who had come under his influence. A newspaper reported that if he hadn’t been arrested, he might have been lynched.