24 Sep On This Day in UB History: September 24 (Clyde Meadows) 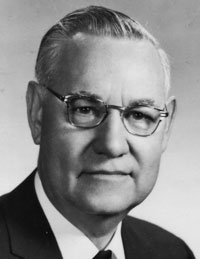 Clyde W. Meadows (right) served simultaneously as a United Brethren bishop and as president of the World’s Christian Endeavor Union. The latter role took him to Europe in September 1963. At a rally in Hamburg, Germany, he told the 1000 attendees that he would be traveling on to Sierra Leone. They insisted on taking an offering to send with him. It came to 300 German Marks.

Meadows landed in Freetown on September 24, 1963, and delivered the money to UB missionary Bernadine Hoffman, who worked in the Christian education department.

The money was used to bring 400 young people from across the country to Mattru for the first national Christian Endeavor convention, held February 22, 1964. It happened in conjunction with the annual meeting of Sierra Leone Conference, which Bishop Meadows chaired.

About 500 people attended that Saturday night service, and 22 people came forward to accept Christ as Savior. Then, on Sunday evening, 75 more came to the altar. Bishop Meadows wrote, “We were completely overwhelmed. All the ministers were engaged as counselors.”