22 Sep On This Day in UB History: September 22 (Huntington University) 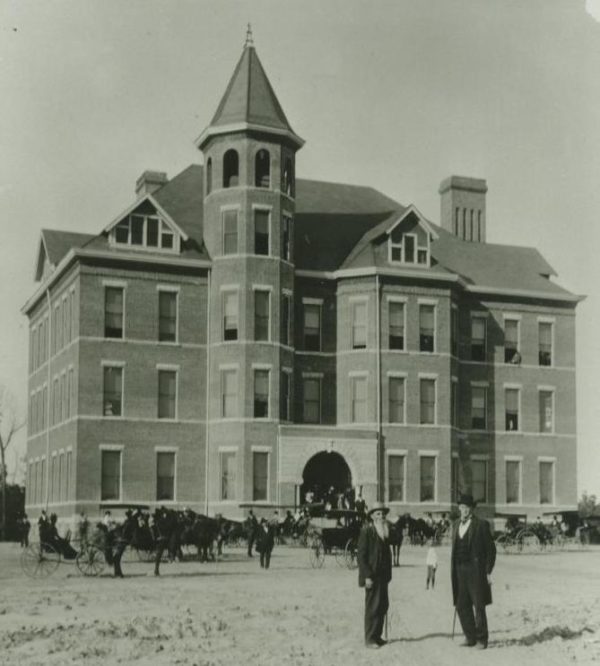 The Administration Building, now Becker Hall, as it looked in 1897.

On September 22, 1897, Central College dedicated the Administration Building. Classes began the next day. That building is now called Becker Hall, and the school is now Huntington University.

After the denomination divided in 1889, our group emerged with just two of the denomination’s many colleges: Philomath College in Oregon, and Hartsville College south of Indianapolis, Ind. Both were struggling, and the UB bishops wanted a college which was directly under denominational control.

In 1896, a group called the Huntington Land Association–a group of developers in Huntington, Ind., one of whom was a United Brethren minister–approached the denomination with a good deal. They wanted to develop an area north of Huntington, just outside of the city limits.

There would be 262 lots in what was called the College Park Addition. They would sell sell for an average of $225. Here’s the deal: if the church would sell 102 of the lots, the Huntington Land Association would donate land for a college and spend at least $35,000 to erect a building (the future Administration Building). We would basically be getting a new college for free.

A contract was signed on March 11, 1896. By the end of March, the Huntington Land Association had sold all 160 of its lots; it took the church a year to sell its 102 lots. People who bought lots were encouraged to build by the summer of 1897, so that when classes started in September, there would be housing for faculty, staff, and students. Since there would be no dormitories, at least not right away, students would live in private homes.

Construction on the Administration Building started in the spring of 1896, and was completed in June 1897.

The Administration Building was dedicated on September 22, 1897, a Wednesday. The entire third floor consisted of Davis Hall, named in memory of former bishop Lewis Davis. About 1200 people jammed into the yet-seat-less auditorium for the service, thereby affirming the building’s structural integrity. More people crowded the lower floors as well. Bishop Milton Wright gave the dedication prayer. They took an offering, which provided $1000 to buy seating for the auditorium. Seize the day.

Classes started the next morning. About half of the 85 students that first year came from the Huntington area; a few were former Hartsville students. Interestingly, about half of the students were enrolled in music courses. Enrollment crept up to 102 by the fall of 1900. The way it worked out, we began the century going past the century mark, and began the next millennium going past the 1000 mark. Symmetry. During the first 20 years, enrollment averaged 100, swinging from a low of 72 to a high of 143.

There were seven faculty, two of them from Hartsville; the school averaged ten staff for the first 20 years. For the first five years, the college president was Dr. Charles Kiracofe, an ordained UB minister and 1871 graduate of Otterbein University. Beginning in 1879, at age 34, he served ten years as president of Hartsville College. In 1888, he ran for governor on the Prohibition ticket, and lost. Kiracofe left the Central College presidency in 1902, spent the next three years editing e Christian Conservator newspaper, and then became a Presbyterian pastor.

Nobody graduated the first year, but there were three graduates in 1899. That means the first annual commencement actually occurred after the school’s second year. Extrapolating, the 100th anniversary saw only the 99th Commencement. Somewhere along the way, the college snuck in an extra year to sync past and present. The 2017 Commencement was heralded as the 119th annual commencement, which implies there was a graduation in 1898 at the end of the first school year. Alas, this is just picking a harmless historical nit.

Daily chapel services were held in the chapel which occupied the west end of the first floor (where, for many of us, the business offices were located). Davis Hall was initially used only for large gatherings, like commencement and plays. College Park Church, which started two months after the college opened, held services in Davis Hall. Don’t even ask if it was handicap accessible.

With the introduction of men’s basketball in 1909, Davis Hall was partitioned to include a gym. But concerns about the constant pounding got the gym condemned. Eventually, that area became two classrooms, and an abbreviated Davis Hall hosted plays and other events.

Initially, the Administration Building lacked indoor restrooms (there were outdoor facilities by the ravine). A steam-heat system was installed in 1903, following strong complaints from students and parents about the cold. More improvements were made through the years…and continue to be made. Now there’s an elevator.