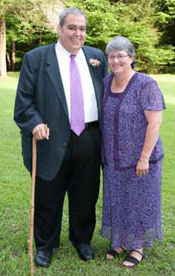 Titus served as director of Laurel Mission for 30 years, 1980-2010. He was described as “a big man with a big heart.” Hundreds of United Brethren, on short-term trips to Laurel Mission, fell in love with this man. And they all heard and loved the same stories. Like the one about Chief Running Bear and his daughter Falling Rock, who got lost in the mountains and was never found. That’s why, Titus would conclude deadpan, many signs along the roads said, “Watch for Falling Rock.”

Titus would hold a straight face for several seconds, but then slowly crack a sly grin, and people would know they’d been had.

Titus loved the Lord deeply, and loved the people who lived up and down Greasy Creek.

In August 1980, Bishop Raymond Waldfogel came for a visit. Titus had been assistant pastor under mission superintendent M. E. Burkett. Now the Burketts were leaving. Would Titus and Debbie take their place? Titus said no; he and a partner had just started a little coal mine and bought a coal truck. But he kept thinking about it. And when Bishop Waldfogel asked again in December, Titus said, “We’ll give it a try.” They moved into the almost-new parsonage in January 1981.