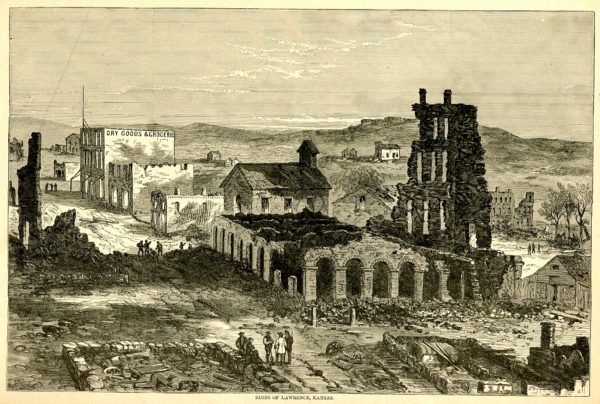 The ruins of Lawrence, Kansas, after the raid.

Early on the morning of August 21, 1863, Confederate raider William Quantrill and about 450 guerrilla fighters descended on Lawrence, Kansas, a town of 3000 people which was considered an anti-slavery stronghold. During the next four hours, they massacred 185 men and boys–anybody big enough to carry a rifle–and left over 180 buildings burning.

The first person killed that morning was a United Brethren minister. Rev. Samuel Snyder was milking his cow on his farm outside of town when a couple guerrillas rode up and shot him three times. Since Snyder had ministered in Lawrence for nearly ten years, we can assume that other United Brethren men and boys were among those slain that morning.

As Kansas and Missouri were opened to settlers, the question was: when they achieved statehood, would they be pro-slavery or anti-slavery? The two sides clashed, often violently. United Brethren people were particularly conspicuous, since the denomination had taken a strong stand against slavery in 1821 and forbid members to own slaves.

Bishop Henry Kumler Jr. and Rev. Josiah Terrell visited southwestern Missouri in 1853. They preached in various places and organized several churches, which were organized in 1854 into the Southwest Mission Conference. Annual meetings were held until 1859, when the “violent and murderous frenzy” of pro-slavery people made it too perilous for our ministers and people. Historian Daniel Berger wrote, “The work was permitted to decline, and no further sessions were held until after the close of the [Civil] War.”

Historian William McKee wrote about the work in Missouri, “Hatred to the United Brethren Church by slaveholders, on account of her testimony against the institution of slavery, well nigh extinguished the work in that part of the state….Our preachers were compelled to leave the country and seek homes elsewhere.” But in northern Missouri, a conference was organized in 1858, with 358 members and nine locations. By the next spring, membership had grown to over 800.

Kansas, located to the north of Missouri, was more friendly to the anti-slavery cause. But not by much.

The first United Brethren missionary to Kansas was Rev. W. Cardwell, who came from Indiana in the early 1850s and started the first UB church in Kansas; it was located in Lecompton, about 50 miles west of Kansas City. He was soon joined by two ministers from western Pennsylvania, Samuel Snyder and J. S. Gingerich, who settled near Lawrence, about 15 miles from Lecompton.

Rev. J. C. Bright wrote in 1855: “The political sky in Kansas is cloudy at present, but freedom must in the end prevail. If Kansas should ever be a slave state, we ought not to abandon it. The gospel of Christ is light, and wherever the dark cloud of slavery is spread, there the light should be diffused. Through sore troubles and persecutions, our brethren continue to prosecute their work, frequently mobbed, waylaid, shot at, threatened, troubled on every side, but not in despair.”

In October 1857, in a meeting at the home of Rev. Snyder, Bishop David Edwards officially organized Kansas Conference with nine ministers and about 200 lay members.

Daniel Berger wrote that these United Brethren, even in the years before the Civil War, “literally passed through fire, being often waylaid and shot at by assassins, had their houses broken into, and were themselves dragged into prison. Their persecutors sought to intimidate them by threats and violence, and by repeated assaults to drive them out of this country. But they were brave men, after the true apostolic type, and continued to preach in the presence of armed foes, often themselves guarded by rifles in the hands of those who came to hear.”

According to one source, Snyder was the only active military officer killed in the raid. About 20 black recruits whom Snyder had recently enlisted into the Second Kansas Colored Infantry camped in Lawrence. All, upon hearing gunfire, were able flee to safety. However, 22 young white volunteers who had joined another regiment were sleeping in tents a few blocks away, and all but five of them were chased down and killed.