12 Aug On This Day in UB History: August 12 (George Bethers) 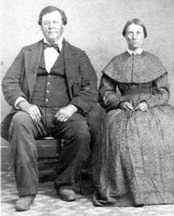 George and Keziah Bethers in 1849.

George Washington Bethers was born August 12, 1821, in Pickaway County, located just south of Columbus, Ohio. A lot of United Brethren lived there. In 1843 he married a Kentucky girl named Keziah Newton, and during their 35 years of marriage, they had 13 children. After her husband died in 1878, Keziah lived another 39 years.

Sometime in the late 1840s, the young Bethers family headed to Oregon. The idea had been on George’s mind for a while. He wrote of backing out in 1847, something he regretted. “Every once in a while I would get the notion, then I would hear some bad story and give it up again, so I decided I would go anyhow….I am glad to be here.”

Up until 1840, Oregon was inhabited mostly by Indians, fur traders, a few missionaries, and an assortment of other settlers. In 1841, a group of 70 pioneers left Independence, Missouri, following a 2000-mile route originally blazed by fur traders across the Rocky Mountains and into Oregon. Another 100 settlers made the trip in 1842, and a wagon train of over 1000 made the trek in 1843. It was just the start of a massive migration–an estimated 400,000 people by 1869–as people in the eastern states were drawn to the promise of better opportunities on the West Coast.

Both Great Britain and the US had vied for control of the area, and the US won out in an 1846 treaty. The Oregon Territory was officially organized in 1848. It included the current states of Oregon, Washington, and Idaho, and parts of Montana and Wyoming. Britain was left with everything to the north.

The Bethers family established one of the pioneer farms of the Marys River Settlement, near present-day Philomath, Oregon. In the distant Northwest, they were sheep without a shepherd. George Bethers began writing letters to The Religious Telescope, the denominational magazine, begging for a preacher.

In 1852, the church came through. An appeal was put out for United Brethren to meet in Council Bluffs, Iowa, to journey together to Oregon. Rev. T. J. (Thomas Jefferson) Connor, a minister in Indiana, was appointed to lead the UBs westward and organize the church. He was joined by four other ministers and over 90 other people. They left Council Bluffs on April 9, 1853.

Among the travelers was Basil Longworth, a young single man. He kept a diary of the seven-month journey. On September 17 he wrote, “At the Columbia River, we met George Bethers, who had come from Oregon to meet us. He had butchered a beef, and we had a feast.” It was no doubt a joyous occasion for Bethers.

Soon, the first United Brethren church meeting was held in a schoolhouse at the Marys River Settlement. The first UB church was organized near there in January 1854. Other churches arose rapidly. The Oregon Mission Conference organized in 1855 with 17 preaching appointments and 120 members. By 1861, there were 42 preaching points and 565 members. The 1869 minutes recorded 1051 members. George Bethers lived long enough to see it all happen.

Today, we have just one church in Oregon: Philomath. Why? Because the other churches remained with the main body–now the United Methodist Church–when our small group split off in 1889. Once again, Oregon is, essentially, unreached by UBs. Our only foothold is there in Philomath, near where it all started with George Bethers writing letters.