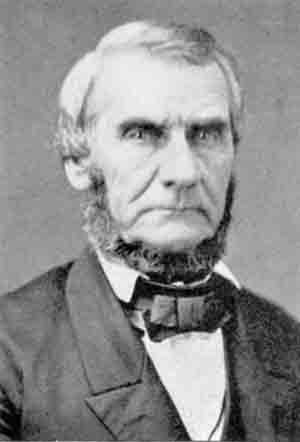 Bishop John Coons died of stomach cancer on August 7, 1869, at age 71. He was our 12th bishop, serving 1841-1845. Poor health probably kept him from being re-elected. However, he continued as an active minister until about age 70.

Coons was born near Martinsburg, Va., on October 25, 1797. When he was about ten years old, his family joined the westward migration, settling in southern Ohio. He became a Christian in 1821 through the ministry of Jacob Antrim, a United Brethren minister who had come from Pennsylvania.

As was common back then, Coons began preaching soon after his conversion. In 1822, he was licensed as a minister in Miami Conference, which then consisted of all United Brethren work west of the Allegheny mountains. He began serving a circuit of churches, and in 1826 was ordained by bishops Christian Newcomer and Henry Kumler, Sr.

According to biographer Henry Adams Thompson, Coons had very little education, and couldn’t even read until after he became a Christian. However, he was said to be a quick learner with an inquiring mind and a strong memory.

Coons spent most of his adult life pastoring churches, either as an itinerant with a large circuit of churches, or as what they called a “stationed” pastor, serving a congregation in one location. Although he was said to have “delicate” health, virility didn’t seem to be an issue. He had eight children by his first wife, whom he married in 1821 and who passed away in 1840. He then married a widow, and by her had seven more children.

Coons was described as about six feet tall, a neat dresser, a commanding but not particularly great preacher, tender-hearted, polite, dignified, and beyond reproach. “Not a single charge of guilt against his Christian life is recorded to blot his memory,” wrote Thompson.

Thompson described Coons as “free from any disposition to succeed if it brought injustice to others, and never uttering a word intentionally to injure the Christian life or character of any. He seemingly guarded with as much care the good name of his brethren as he did his own.”

Coons didn’t leave any particular mark on the church, but was one of those ministers–of whom there were many throughout our history–who served long, served faithfully, served capably, and influenced the spiritual lives of hundreds of people.