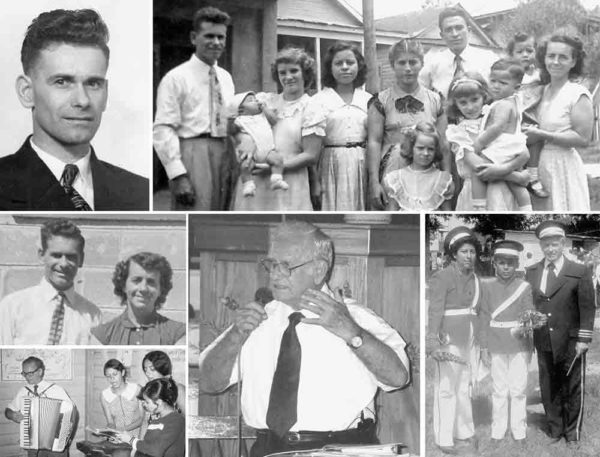 Clockwise from upper left: Archie Cameron. Archie and Maisy Cameron (on the ends) with their daughters and Hondurans. Archie with members of the Bethel Band, which he founded and led. Archie preaching in 1997. Archie playing the accordion–one of many instruments he played–to accompany some Honduran girls. Archie and Maisy.

On July 31, 1952, a ship docked in La Ceiba, Honduras, with five Canadians aboard: Archie and Maisy Cameron and their three daughters. Immigration and customs red tape forced them to spend their first night in Honduras aboard the ship. They could only stand on the deck and catch a limited glimpse of this city which would become their home for more years than any of them imagined.

Archie’s father was born in Scotland, but immigrated to Canada. A return visit to Scotland proved ill-timed: World War I broke out, and the family was stranded in Glasgow for the duration. It was there, in 1917, that Archie was born. After the war, they returned to Toronto.

Archie grew up, was married, and became a Christian in a Presbyterian church in Toronto. He became Baptist for a while, and then began working with a classmate at Toronto Bible College who was pastoring a United Brethren church in Toronto. After graduating, Archie was assigned to three UB churches on the Niagara circuit–Sherkston, Stevensville, and Garrison Road–but all the while felt God calling him to missionary service in Africa.

Archie and Maisy interviewed with the UB Mission board, and were redirected to Honduras. Archie realized God had called him to the world, not specifically to Africa. So Honduras it would be…as it turned out, for the rest of his life.

We had become involved in Honduras in 1944, assuming oversight of five churches along the north coast. These English-speaking congregations consisted primarily of immigrants from Caribbean islands. We had sent missionaries to teach in the mission school. Don and Leora Ackerman and Betty Brown met the Camerons at the dock on August 1.

In 1953, the English churches got upset about our stand on secret societies and parted company. But by then, Archie had begun working among the majority Spanish population. They now commanded Archie’s full attention. He soon founded the Bethel UB church in Honduras, and it became the launching pad for much of the UB work which exists today in Honduras.

Archie, along with family members and laypersons from Bethel, conducted evangelistic meetings in villages throughout northern Honduras. People were won to Christ, and churches arose in those villages. Often, Archie and his group were the first evangelical witness in those villages.

Honduras Conference was officially organized in 1956, and Archie remained its leader until 1986, when he retired. Today, Honduras Conference has 110 churches and church plants and over 5000 members. The work which started in Honduras has now spread to Nicaragua, Costa Rica, El Salvador, and Guatemala.

Archie and Maisy Cameron continued living in Honduras. Maisy passed away in 2003, and Archie died two years later at age 87. Physically, Archie Cameron was a small man. But the impact of his life makes Archie Cameron one of the United Brethren giants of the 20th Century.