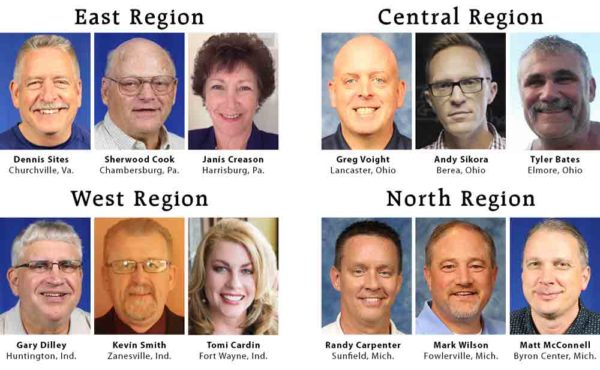 The Executive Leadership Team for 2017-2019 has been finalized. In addition to the bishop, there are 12 members–six ministers and six laypersons (three persons from each of the four regions).

The US National Conference elected four members to four-year terms, 2017-2021. They join four persons elected in 2015 to four years terms (ending in 2019). In addition, this week the new ELT approved four persons nominated by Bishop Todd Fetters to serve two-year terms; they are the same four persons appointed to these positions in 2015.

There are only two changes from the 2015-2017 team, both involving laypersons. Tyler Bates, from Bethel UB church (Elmore, Ohio), and Matt McConnell, from Banner of Christ UB church (Byron Center, Mich.), were elected during the July 13 business session. Ministers Gary Dilley and Dennis Sites were re-elected.

The Executive Leadership Team meets twice a year, typically April and October. They also use the internet to process quite a bit of business between meetings. You can view the 2017-2019 ELT here, and can read the Discipline chapter about the ELT.