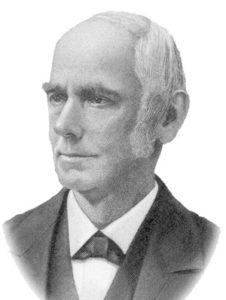 John Jacob Glossbrenner was born on July 24, 1812, a few months after the death of Bishop Martin Boehm. He was raised Lutheran, became a Christian at age 17 under the preaching of a Methodist Episcopal minister, and joined the United Brethren church in 1830, the year of Bishop Christian Newcomer’s death.

Glossbrenner was among the church’s second generation of leaders—the Builders, who followed the Founders. Other Builders included Bishops William Hanby, Jonathan Weaver, Lewis Davis, and David Edwards. Glossbrenner would serve 40 years as a bishop, longer than anyone before or since. Historians sometimes describe him as a “model bishop.”

From 1831-1845, Glossbrenner served circuits in Virginia and Maryland. Five men helped buy him his first horse. On February 14, 1833, he married Maria Shuey (yes, they celebrated Valentines Day back then). They were married 51 years and gave birth to six children; one died in infancy, but five daughters grew to adulthood and married.

Glossbrenner was elected as a presiding elder (like a district superintendent) at age 22. Biographer Henry Adams Thompson wrote that, because Glossbrenner started in leadership so young, “Those not acquainted with him began to think of him as much older than he really was.” He was a delegate to General Conference in 1837 and 1841, and in 1845 was elected to the first of ten terms as bishop. All three bishops were rookies that year. Glossbrenner, at age 32, was the youngest.

Glossbrenner remained in Virginia—the South—during the Civil War. He sometimes was asked to preach to rebel soldiers, and though folks expected him to side with the North, he prudently avoided anything partisan. Another UB minister, after Confederate troops were driven out of his area, publicly prayed that they would be defeated. When the South recaptured that territory, he was forced to flee. Henry Adams Thompson wrote, “Mr. Glossbrenner would make no such mistakes as that. He was careful and discrete and had the confidence of both sides.”

Throughout Glossbrenner’s tenure as bishop, only ministers were allowed at General Conference. He became a strong advocate for lay representation—not just at General Conference, but at all other levels. He argued from Scripture and church history that laypersons had long been part of governing bodies. He wrote in the denominational paper, “What do the laity lack to justify their exclusion from our councils? Is it a want of piety, intelligence, or a want of loyalty to the church? Emphatically, no.”

The self-educated Glossbrenner, who as a young minister bought books whenever he had the money, also championed higher education for ministers. Since there were no United Brethren colleges, UBs were attending colleges of other denominations…and not coming back. He described this as “grievous neglect” of the persons God had entrusted to us. He wrote, “The loss of so many cultivated minds and pious hearts is irreparable….We cannot spare our sons to others. We cannot innocently neglect to train them for ourselves.”

Glossbrenner was described in many positive ways. Even-tempered. Calm. Dignified. Kind. Persistent in what he believed to be right. Not easily irritated. Modest. Unassuming. Didn’t seek attention or compliments. Wouldn’t disparage other people. Thompson added:

The title “bishop emeritus” was originally created for Glossbrenner. Maria passed away in 1884, and his own declining health made it clear that this would be his last term. The 1885 General Conference debated giving him a complimentary role on the board of bishops, perhaps as “bishop-at-large.” They settled on the emeritus title, which gave him “all the honors and privileges” of the office. He passed away on January 7, 1887.

There were an estimated 25,000 United Brethren when Glossbrenner entered the ministry, and about 250,000 when he died. Bishop Jonathan Weaver, speaking at Glossbrenner’s funeral, remarked:

He grew up with the growth of the church and was always to be found in the front rank of every advance made by the church….Bishop Glossbrenner was always ready for everything that would add potency to the church that he loved so well. If he erred along any of these lines, it was because he loved the church more than his reputation. The one great question with him seemed to be, “Is it right?”