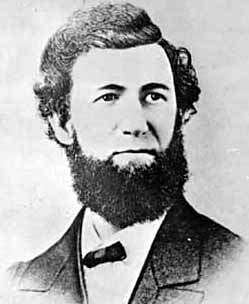 Jolly Old Saint Nicholas.
Up on the House Top
Darling Nelly Gray
Who is He in Yonder Stall

Those are among the 80 songs written by Banjamin Hanby, an ordained United Brethren minister, and the son of UB bishop William Hanby.

Benjamin Hanby was born on July 22, 1833. At age 16, he enrolled in our first college, Otterbein University. He was also involved, with his father, in helping fugitive slaves escape to Canada along the Underground Railroad.

“Darling Nelly Gray,” written in 1856 when Hanby was just 23 years old, became a huge hit across the Northern states, and helped rally sentiment against slavery. It tells the story of a Kentucky slave whose sweetheart was sold to slave-owners in Georgia.

One night I went to see her, but “She’s gone!” the neighbors say.
The white man bound her with his chain;
They have taken her to Georgia for to wear her life away,
As she toils in the cotton and the cane.

Oh! my poor Nelly Gray, they have taken you away,
And I’ll never see my darling any more;
I’m sitting by the river and I’m weeping all the day.
For you’ve gone from the old Kentucky shore.

Benjamin Hanby became an ordained UB minister and pastored a church in New Paris, Ohio. But that was short-lived. He left the ministry to run a singing school in New Paris. In 1865, after his two Christmas songs were published, he moved to Chicago to work with a music publisher. But he died there two years later, at age 34. Makes you wonder how many other memorable songs he might have written.