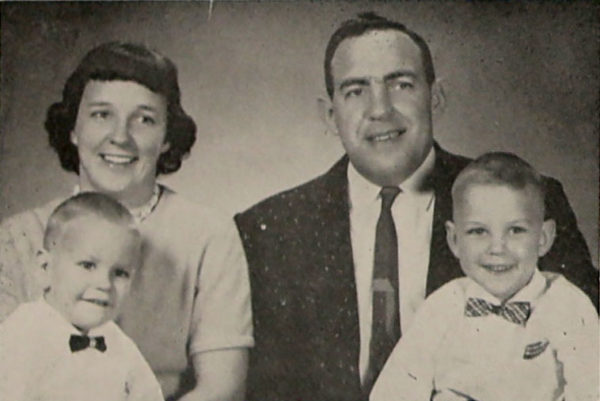 On July 16, 1957, Jerry and Eleanore Datema began their first term as missionaries in Sierra Leone.

Jerry Datema was born December 15, 1924, in Dutton, Mich., near Grand Rapids. He was the fifth of eight children in a close family. He became a Christian at the Dutton UB church in 1947.

At age 20, in 1950, Datema felt the Lord pointing him toward missionary service. No family member, and nobody from his home church, had ever been a missionary. But as he read Scripture and pondered the future, missions always rose to the surface. He wrote in the September 1993 issue of Missions Impact, “After struggling unsuccessfully to convince the Lord He was making a horrible mistake, I surrendered to His will.”

In September 1951, Datema left the family farm and enrolled in Moody Bible Institute in downtown Chicago. There, he met a Minnesotan named Eleanore. They were married in 1954 and would raise four sons. They set up house in Dutton, where Jerry pastored his home church for three years…but always with his eyes set on missions.

On the same day in June 1957, Jerry Datema was both ordained and commissioned as a missionary. He wrote, “The greatest thrill of my life was that day in 1957 when I knew I was doing the perfect will of God in serving Him on foreign soil. Nothing in my life has ever been as fulfilling.”

“We weren’t excited about leaving Sierra Leone,” he said in an interview published in the United Brethren magazine. “Missionary work was extremely fulfilling. I could bury myself in the work in one country, Sierra Leone, and understand it very well. When I became bishop, that suddenly changed. There were a few years when I felt frustrated, because I didn’t understand the cultures of all of these different countries….But that changed over time. And as I became involved with the overseas fields, I became excited about each one.”

Much happened during Datema’s twelve years as Overseas Bishop. Sierra Leone was nationalized many years earlier than expected. We pioneered new work in Macau, and expanded our ministries in India and other countries. We began supporting missionaries with a number of other organizations—in Japan, New Guinea, Greece, the Philippines, Austria, Kenya, Columbia, Russia, and elsewhere. The faith-promise emphasis helped the missions budget pass the $1 million mark for the first time. He dealt with the Sandinistas in Nicaragua, and helped prepare the Hong Kong church for the 1997 transition to Mainland China. And as he left office, he could only watch as his beloved Sierra Leone descended into war.