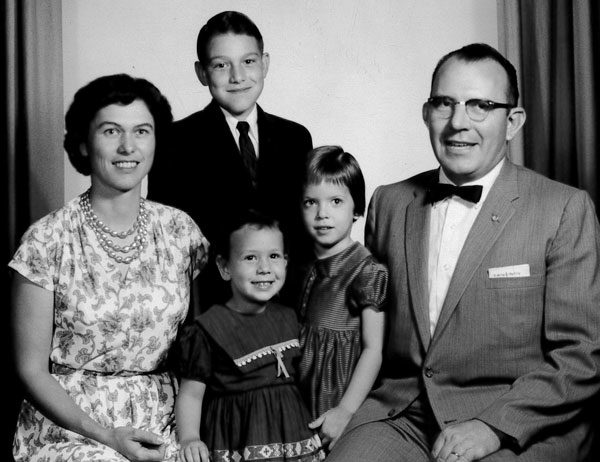 Emmett and Shirley Cox and children.

Emmett Cox grew up in the Garnett UB church in Garnett, Kansas, and was converted in 1943. Shirley was the daughter of Rev. and Mrs. Glenn Betterly, who were serving the North Bruce UB church in Port Elgin, Ontario, when Shirley headed off to Huntington College. Emmett and Shirley met at HC and were married on August 14, 1948. They both graduated from Huntington College in 1951. Shirley had a degree in Education. Emmett went on to graduate from the HC seminary.

Emmett and Shirley were missionaries in Sierra Leone over a 20-year period beginning in 1957. During those years Emmett served as a high school principal, business manager, general superintendent, primary school secretary, and field secretary. Shirley also kept busy with various roles over the years, including matron of the Minnie Mull girls’ home and teacher at Centennial Secondary School.

In 1969, Emmett received a Masters in Missions from the Fuller Theological Seminary in Pasadena, Calif. That year, General Conference elected him to oversee our worldwide mission work as the denomination’s General Secretary of Missions. That ended in 1973, when General Conference decided to give that responsibility to Bishop Duane Reahm, the first person to hold the role which would become known as the “overseas bishop.”

Emmett and Shirley then pastored churches for the next 30 years.

In retirement, Emmett and Shirley also served short-term as volunteers in Myanmar. They had four children: son Douglas, daughters Diane and Darlene, and foster son Billy Simbo, from Sierra Leone.