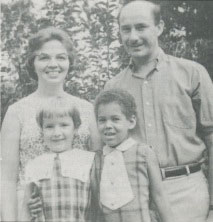 Alan and Marilyn Wright with daughters Carol and Joanne.

Alan was born in London, England, and graduated from Exeter University. He felt called to serve as a teacher in Sierra Leone. He would become a physics teacher at Centennial Secondary School in Mattru.

Marilyn, the daughter of former Sierra Leone missionaries Charles and Ruth Saufley (1928-1932), Marilyn became a nurse. She wrote, “Having been reared by faithful Christian parents, I cannot recall the time when I did not believe in the Lord. I considered mission work a way to come closer to the Lord. Perhaps this fact, and an early impression that I should serve as a nurse in the country where my parents served, led me to my present position.”

Marilyn served at Mattru Hospital 1960-1963. After their marriage, she and Alan served together at Mattru for two terms, from 1964-1971. They both became members of Salem UB church in Chambersburg, Pa.

Alan passed away September 18, 2013. At the time of Alan’s death, he and Marilyn were living in Abbotsford, British Columbia.