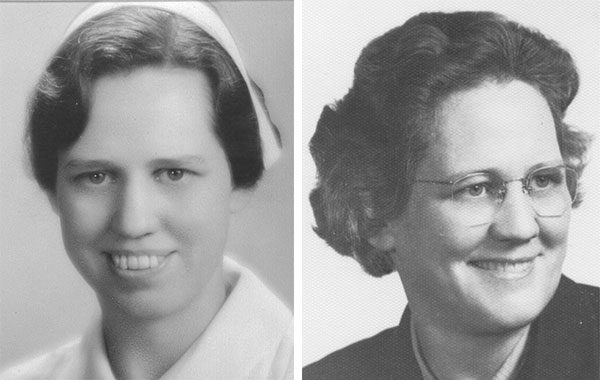 Emma Hyer as a young nursing student in the early 1930s, and during her final term in the 1950s.

On June 30, 1936, Emma Hyer, RN, arrived in Freetown, Sierra Leone. The next day, she traveled on to Gbangbaia, where we had a medical dispensary. Since 1934, Dr. Lesley Huntley, our first physician in decades, had been laboring there pretty much on his own. Now, finally, he had a trained nurse to assist him.

Emma was from the United Brethren church in Coleta, Ill. She graduated from Huntington College in 1931 and went on to earn her nursing credentials. She was among six Huntington College students who committed themselves to missions during a special service during the late 1920s, and who went on to spend many years in Sierra Leone. Dr. Huntley and his future wife, Mary Bergdall, were two of those students. Charles Saufley served two terms starting in 1928. Martha Anna Bard gave 27 years of missionary service. Erma Burton, upon arriving in Freetown in 1932, married her longtime fiance Clarence Carlson. All but Charles Saufley were on the field when Emma Hyer arrived.

Nurse Hyer wrote that on her first day at the dispensary, they had 65 patients but, despite a long day of work, could only treat 40. That would become her new normal. When the Huntleys left Africa at the end of June 1937 for a year of furlough, she ran the dispensary on her own—delivering babies, extracting teeth, and the occasional emergency appendectomy. One day she cut out, without anesthetic, the tail of a stingray embedded in the fleshy part of a fisherman’s thumb. George Fleming gave her credit for saving the life of Clarence and Erma Carlson’s young son, Jimmie, who caught whooping cough and needed days and nights of constant care.

The Huntleys returned to Gbangbaia July 1938 to November 1941. During his second term, they treated over 31,000 patients. Emma Hyer was there for most of that time; she took a year of furlough in May 1938, but returned to serve 1939-1942. She entered the military in April 1944 and spent 16 months in Great Britain, attaining the rank of First Lieutenant. She returned to Sierra Leone for one final term in 1952-1955, this time at the new hospital in Mattru.