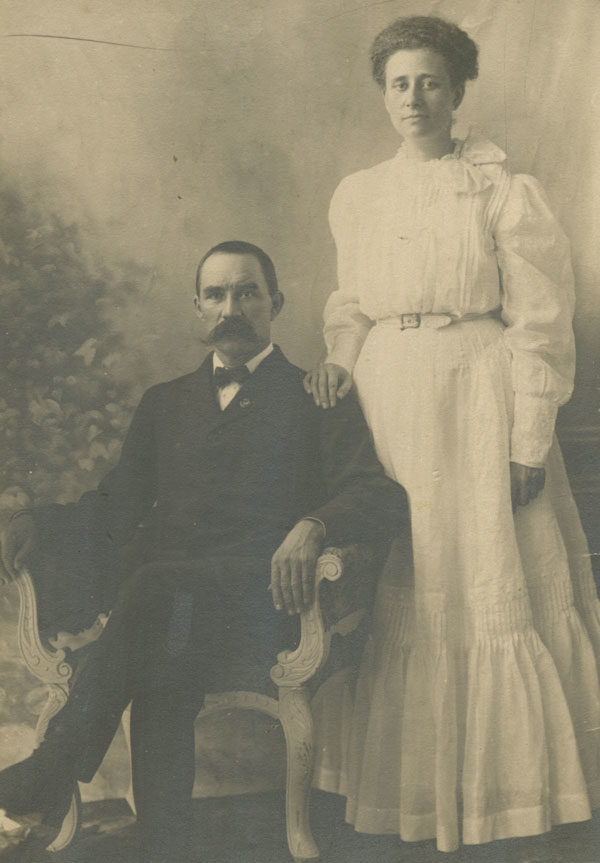 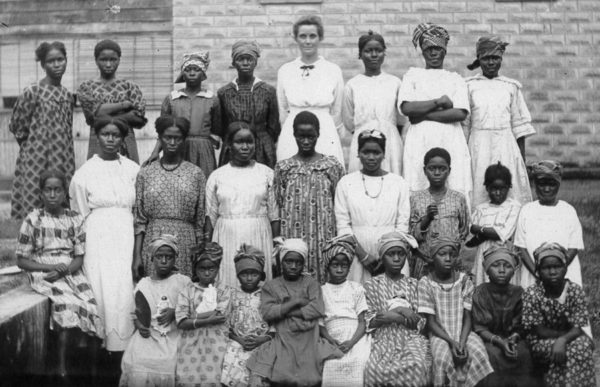 Minnie Mull with girls at the home at the Danville station in Sierra Leone.

Minnie Mull and Charles Linker, UB missionaries in Sierra Leone, were married on June 27, 1906, in Freetown, Sierra Leone. At the time, they were the only UB missionaries on the field. They chose June because children at the two homes at the Danville station in Gbangbaia were on vacation.

Four months later, Minnie was dead. And she would not be the only missionary to die there.

In 1900, the Women’s Missionary Association decided to build a home for girls at the Danville station in Gbangbaia. Rev. B. O. and Margaret Hazzard arrived in September 1900 to build the home. Margaret was stricken with beri-beri and, paralyzed, was evacuated to England, where she began a very long recovery. But Rev. Hazzard kept working. The building was ready for occupancy in December 1901. Rev. Hazzard, stricken with blackwater fever, died at Danville the following July.

Minnie Mull went to Sierra Leone in December 1904. She joined Lena Winkel, who had arrived in 1901, in running the new girls’ home. Charles Linker, from Elmore, Ohio, arrived in October 1905.

Minnie became ill in early September 1906 and was taken to the government hospital at Bonthe on September 10. After a couple weeks she returned to Danville to continue recuperating. But in early October, she experienced a relapse, and Charles was advised to get her to the hospital ASAP.

On October 18, she was placed in a boat, and five oarsmen began rowing toward Bonthe, knowing that their passenger was terribly ill. Just minutes from the dock at Bonthe, with Charles at her side, Minnie Linker passed into eternity.

Charles wrote to the Mission office:

“Why I was permitted to live with her so short a time, God only knows. Oh, how I miss her! Now I am alone here, and so much to be done with only one pair of hands. How sad and lonely I feel! I am quite worn out, as I have been waiting on Minnie day and night for more than two weeks….Oh, how dark the days and lonely, but my strength is in God, and in Him will I trust at my post of duty as a faithful soldier, though I die. I am crying and praying day and night, asking God to raise up someone who will come over and help us in this dark land of Africa.”

“Minnie was happy in the anticipation of her marriage, and in all the letters from her pen thereafter, expressed her high appreciation of one so true and so manly to whom she could look as an earthly protector, and enjoy their work as missionaries together. We who know Mr. Linker best have the consoling thought that Minnie had every comfort that one pair of human hands could give.”

Charles Linker said he would remain at his post, and he did. Reinforcements arrived on November 19, 1906: Christopher and Bessie Wilberforce. Christopher was the son of a Sierra Leone paramount chief, and had been in the States for five years attending college. He married Bessie Ramsey of Dayton, Ohio, and they made themselves available for missionary service.

Charles Linker returned to America in early 1908, and the work moved along smoothly under the leadership of Christopher and Bessie. But on June 15, 1908, Bessie died minutes after giving birth to her first-born child, a son named Theodore. Once again, shock and sorrow descended on the mission community at Danville.

Charles Linker, after an 18-month furlough, returned to Sierra Leone for one more term in December 1909, and concluded his service in Africa in October 1911.

In 1923, a new home for girls opened in Bonthe. It was named the Minnie Mull Memorial Home.